ScopeAR, a graduate of the Y Combinator Summer 2015 class, came to the augmented reality game very early, launching in 2011 when there was very little hardware and most people didn’t understand the technology. But it has managed to hang around long enough for the market and the hardware to finally catch with the founders’ vision of using AR as an advanced training tool in the enterprise.

Today, the company offers a pair of tools. First of all, there is RemoteAR, which CEO and company co-founder Scott Montgomerie describes as “Facetime with AR on top of it.” It allows a technician to virtually look over the shoulder at what a local person is seeing and provide directions and feedback in real time remotely. For example, the expert could circle the cover the technician needs to remove and point to the screws with two virtual arrows.

This could have great utility in any situation where you have an experienced person in the office, who doesn’t want to go on the road on anymore, but can still provide detailed instructions to a novice, acting as a trainer and helper. This is an actual problem in many industries with aging workforces. 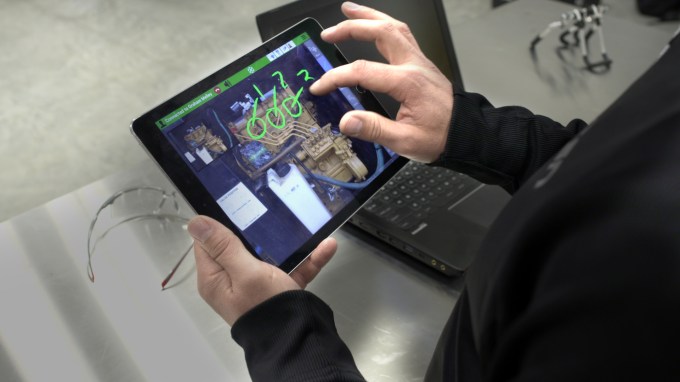 The second product, called WorkLink, lets you import a 3D CAD model, then associate that model with real equipment. When you put on hardware like Microsoft Hololens, you can see the 3D representation of the equipment and follow along with instructions on how to repair it. It also works with iOS, Android and Windows devices.

One big change since the company was established in 2011 is the variety of platforms you can use for augmented reality. “Last year was the thing where AR took off. Apple got into it with ARKit and Google with ARCore and awareness happened and people saw it was viable,” Montgomerie said.

By creating enterprise use cases like remote assistance and work instructions, the company has been gaining momentum over the last year, and reports tripling its revenue in 2017. Although they aren’t sharing a specific number, it’s fair to say they are growing quickly.

They developed an augmented reality training product early on that resonated with a mining company, and that along with consulting working with the likes of NASA, Boeing and Toyota, helped them stay afloat until things began to really click around AR in recent years, Montgomerie explained.

They also took some time to be part of the Y Combinator Summer 2015 class, and even scored a spot on TechCrunch’s list of favorite Demo Day 2 startups. During the YC experience, they developed the first version of RemoteAR. WorkLink followed a year later.

So far the company has taken on a fairly modest amount of investment with Montgomerie reporting three seed rounds including $2 million right after Y Combinator, $1.7 million last May and another $2 million this past December. If the company continues to grow at this rate, it’s a good bet they will be looking for a Series A at some point to help scale the company further.