Here’s one way to make sure Amazon doesn’t get control of Flipkart in India by outbidding you for a majority stake: buy it outright. Today during SoftBank’s earnings presentation, it looks like CEO Masayoshi Son slipped in a little scoop: he announced that Walmart, the world’s largest retailer, on Tuesday night reached a deal to buy Flipkart, the leading e-commerce retailer in India, putting an end to months (and actually years) of speculation. SoftBank is currently one of Flipkart’s biggest investors.

“Walmart is purchasing Flipkart,” Son said in the presentation (he spoke in Japanese with a real-time translation provided by a SoftBank representative). “Last night there was the official announcement.”

Very soon after, there was a quick and slightly messy recovery: a second gentleman approached Son during the Q&A section of his presentation and slipped him a note, after which point the CEO read it, and then said an announcement had not yet been confirmed. 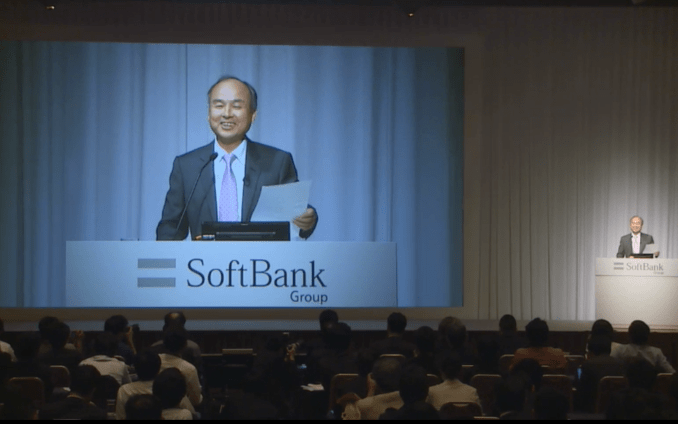 “With regards to Flipkart, it’s not officially announced yet,” he said with a weak smile. “Maybe I should not have mentioned that … Well, I can’t take it out!”

“Not yet announced” is also the line that SoftBank spokespeople are also taking, and we have yet to hear back from Flipkart and Walmart with their comments. Yet it could come very soon, though: we’ve been told by a source that the official news will be released at 5pm India time.

If Masa’s first statement was accurate, Walmart’s acquisition would end a long-running saga.  For months now, there have been rumors that the world’s largest retailer was gearing up to acquire a sizeable stake in the Indian company to get its foot into India — with reports putting the size of the stake at anywhere between 51 percent and around 70 percent, and at a value of between $15 billion and $20 billion, with additional investors potentially including Google.

But in the last week, alternative reports started to emerge that Amazon would try to gazump Walmart and take a pole position as a shareholder.

Walmart and Amazon have been hotly competing against each other in other markets, specifically the US — where Amazon dominates in online sales but Walmart continues to lead the charge in brick-and-mortar, despite many aggressive moves from Amazon, such as its acquisition of Whole Foods.

Meanwhile, India — Asia’s second-largest economy after China and one of the world’s fastest-growing markets — has become a key country for Amazon over the last several years, with billions already ploughed into its operations there and billions more earmarked for future investment. So when it appeared that Walmart was also going to try to muscle in by taking a stake in the country’s largest homegrown online retailer, Flipkart became the latest battleground between the two U.S. giants.

Walmart clearly was not ready to give up, though. As we pointed out last week, Walmart divesting its stake in Asda in the UK to Sainsbury’s would pave the way for the company to make a bigger move in India, and that seems to be what has happened here.

It’s still not clear if Walmart will buy out all investors with this deal, or whether it will take just a controlling share, and continue to involve other third parties.

Flipkart has raised around $7.3 billion in funding since being founded in 2007, with other investors including Microsoft, eBay, Naspers, Tencent, Tiger Global, Accel and many more, and it has been a consolidator of sorts itself, buying eBay India last year.

But although it is the country’s biggest online retailer, it has had a rocky time in terms of its valuation, which at one point was over $15 billion but dipped to $11.6 billion in its last round in 2017, in part because of fierce competition from Amazon, Snapdeal and more.

Interestingly, we should point out that this is not the first time that Son has “announced” an India-based tech deal ahead of time.

Two years ago during another quarterly presentation, the SoftBank boss let slip that OYO — the hotel aggregator service that counts SoftBank as an investor — had acquired rival Zo Rooms, a deal that had been much-speculated in India at the time.

Despite his reveal, the OYO-Zo deal actually never happened. In fact, the two were at loggerheads and even went to court as the relationship soured following the breakdown of the proposed deal.

The scale of the Flipkart-Walmart tie-up is many orders of magnitude higher, with Flipkart’s India’s highest-valued startup and a poster child for the tech industry. Let’s hope Mr. Son got it right this time.