Monzo, one of a plethora of U.K. fintech startups aiming to re-invent current account banking, has launched a new feature that makes it even more frictionless to transfer money to friends. Dubbed ‘Nearby Friends’, the new geolocation functionality uses Bluetooth to let you see anyone else that uses Monzo who is nearby so that you can initiate a payment without needing their phone number to be in your contact book first.

One of the ways Monzo has increased its virality from the get-go is by making friend-to-friend payments easy, either to people who already bank with the startup, or via the Monzo.me service, which gives users a payment link to share with friends. The idea, as Monzo co-founder Tom Blomfield often explains, is that unlike traditional incumbent banks that basically have zero network effects (perhaps beyond joint accounts), the challenger bank is designed to become more useful the more people who join it. 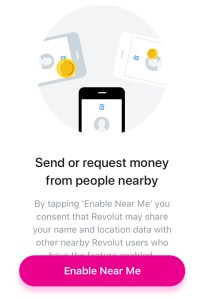 Revolut has a similar feature called ‘Near Me’

“Thanks to the magic of Bluetooth, you can see anyone else that uses Monzo nearby. To protect people’s privacy, you’ll only find people who also have the feature open at the same time. With just a couple of taps, you can send people money, without the need to swap numbers or do any other admin,” writes Andy Smart, iOS Platform Lead at Monzo, on the company’s blog.

Under the hood, Monzo’s ‘Nearby Friends’ uses Google Nearby, Google’s peer-to-peer networking API that allows apps to “easily discover, connect to, and exchange data with nearby devices in real-time, regardless of network connectivity”. Specifically, here is how Monzo says its implementation works:

The token does not identify you personally outside of Monzo’s systems, which means we don’t share any of your personal information with third parties during the process. The token we send to Google expires after a short period of time, meaning your personal data is unidentifiable.

Meanwhile, competitor Revolut recently — and relatively quietly by its standards — rolled out a very similar feature, as it is wont to do. Called ‘Near Me’, I understand it will be formally unannounced in a company blog post as soon as tomorrow and is another clear sign of how fast the $1.7B valued banking startup is moving.