Gamalon wants to change the game when it comes to understanding text-based customer communications. Instead of using neural networks to learn about a vast corpus of information, the startup takes a different approach, putting the text in a database and building decision trees to very rapidly train the data to arrive at the required information. Today, it announced a $20 million Series A investment led by Intel Capital.

Other participants in the round included .406 Ventures and Omidyar Technology Ventures along with existing investors Boston Seed Capital, Felicis Ventures and Rivas Capital. Today’s investment brings the total raised by the company since inception in 2013 to $32 million including backing from DARPA in earlier rounds.

Gamalon CEO Ben Vigoda says they developed a new approach to analyzing customer interactions because the state of the art in AI and machine learning was too much of a black box.

His company wants to change that by making the whole process much more interactive. To that end Gamalon also released a new tool called Idea Studio, a product that can automatically build learning trees to help users arrive at answers extremely fast or allow a business analyst or data scientists to simply enter a series of queries and build a decision tree on the fly based on the text. With neural networks, Vigoda says, the user has no control over the end result, but with Idea Studio you can edit the trees and refine the results immediately. 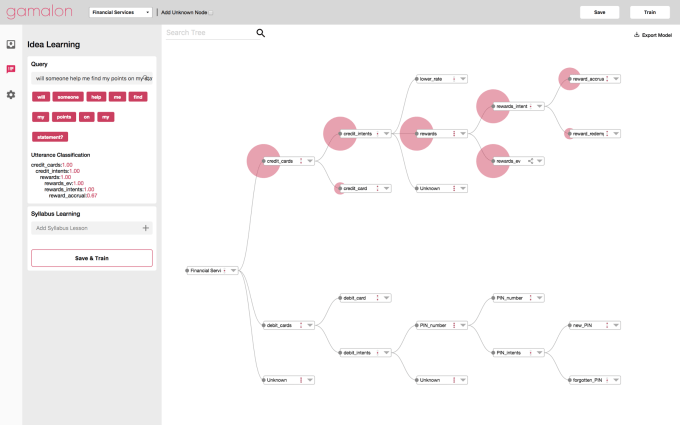 The product still needs a way to review all of the text-based content, of course, but instead of having humans categorize it all manually, with Gamalon you import your data into a database, do analytics on it and then make it available for rapid categorization and response.

This could have multiple utilities, whether for customer service agents to find answers very quickly or customers to interact with bots and find answers much faster. Analysts could use it to locate answers to business issues, and it’s sophisticated enough for data scientists to build machine learning projects based on a large corpus of data.

You can build a learning tree by entering related text to train it. GIF: Gamalon

Naveen Rao, corporate vice president and general manager in the Artificial Intelligence Products Group at Intel Corporation says they like how Gamalon puts machine learning into hands of many different employees around the customer information use case. “We want enterprises of all levels of AI capability to take full advantage of this growing volume and complexity of data. Gamalon’s unique approach can help users better understand billions of customer communications, customize individual responses, and take action to better serve those customers,” Rao explained in a statement.

The company is based in Cambridge, MA and has 23 employees. They have six large customers including Avaya.