In April, Spotify and Hulu teamed up on a discounted bundle of both of their services for $12.99 per month, following a similar deal for students launched last fall. Now, it seems, the streaming service is considering expanding its entertainment bundle offerings to include one with Scribd’s audiobooks service, too.

In a consumer survey that recently popped up in Spotify’s mobile app, the company asks a lot of questions about audiobooks — and more specifically, about a bundle with Spotify, Hulu and Scribd combined.

.@Spotify to offer @hulu or @Scribd in addition to the premium plan 🙌 pic.twitter.com/pW1ijxEbLE

The survey begins with questions about media consumption habits involving reading or listening to non-music content — like if the customer had listened to an audiobook or podcast in the past three months, or if they’ve read a physical book, magazine or e-book.

It then asks the customer how they listen to audiobooks, how often and using which format — downloads, borrowing, CDs or subscriptions.

In a question about subscriptions, Spotify asks, “Which is your main audiobook subscription service taht you use?”

The survey taker can then choose from: Playster, Scribd, Amazon Prime, Downpour, Otto, Audiobooks.com, Kindle unlimited, Audible, Kobo and Other.

But the most interesting question is the one where Spotify tries to get a feel for consumer interest in a Spotify/Hulu/Scribd bundle.

The bundle, the survey explains, would add an additional $2.99 per month on top of the existing Spotify Premium for Family subscription, which currently costs $14.99. Like the Hulu/Spotify deal, it would offer access to Hulu’s Limited Commercials plan along with a Premium subscription to Spotify — in this case, however, its family plan. But for an extra $2.99 per month — bringing the total to $17.98 per month — the customer would receive 1 free book credit per month from Scribd’s library of audiobooks. (Scribd usually is $8.99 per month for unlimited books).

These audiobooks would be ad-free and could be listened to offline, the survey notes. 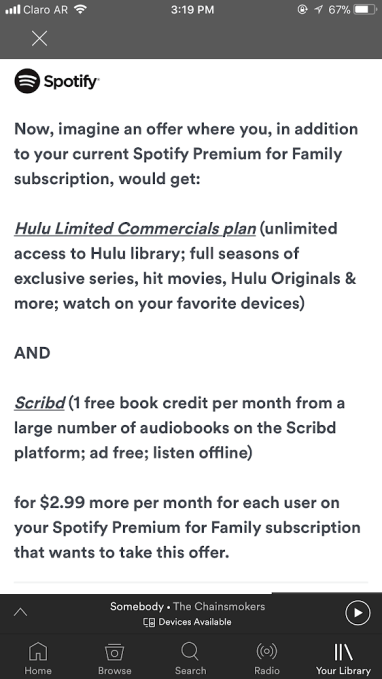 Of course, a survey question doesn’t mean that a deal currently exists or is being offered to customers. It doesn’t even mean Spotify will follow through by offering a deal with Scribd. But it is an interesting signal about Spotify’s plans — especially given its recent partnership with Hulu, and its earlier comments about exploring different bundles in the future, which were made after its first bundle launched. 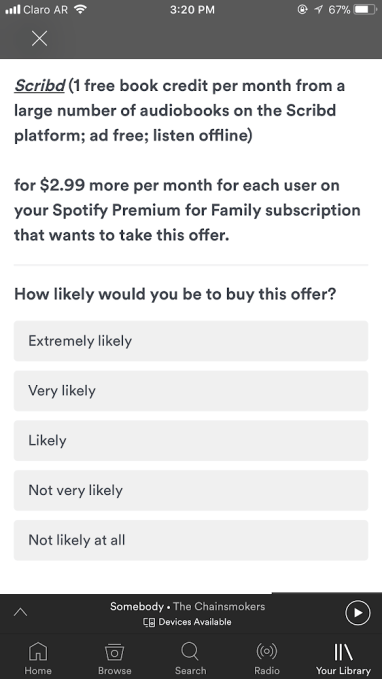 The issue facing Hulu and Spotify’s services — and Scribd as well, for that matter — is a war with platform giants like Amazon, Apple and Google, which are already bundling streaming services for music, video and, in Amazon’s case, books, magazines and audiobooks, and a host of other perks via Amazon Prime.

That means rivals like Spotify, Hulu and Scribd will have to fight back with deals of their own — and maybe even consolidation efforts through M&A at some point.

Reached for comment, a Spotify spokesperson responded, “We continuously test new products and features to better the on platform experience for our users. This is not an indication of an upcoming partnership at this time.”

At this time. Yep. Noted.