America delivered more AR/VR revenue than China last year, but Chinese growth in the next five years could see it dominate AR/VR long-term — and not by a small margin. With the potential to take more than $1 of every $5 spent on AR/VR globally by 2022, the natural advantages of the Chinese AR/VR market are a golden opportunity (or threat) for domestic and international players. Combine China with other major countries in the region, and Asia could deliver around half of AR/VR global revenue in five years’ time. Western companies might need to adopt a “we try harder” approach to compete at the same level. 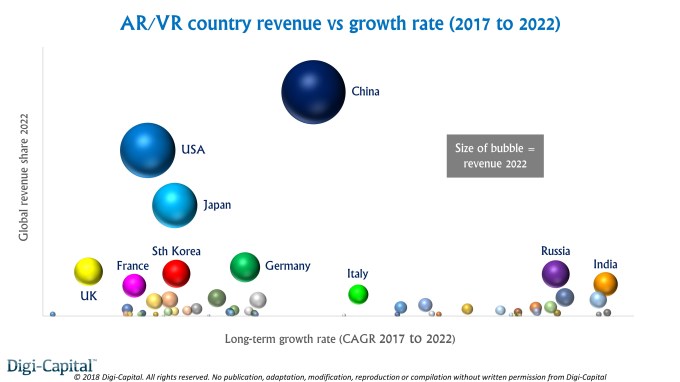 Since 2015 we’ve said that ubiquitous AR could dominate focused VR long-term. While the two markets might merge into unified “XR” (or some other acronym) one day, they could have very different dynamics for the foreseeable future. AR (mobile AR, smart glasses) could approach 3.5 billion installed base and $85 billion to $90 billion revenue by 2022, while VR (console, PC, mobile, standalone) might deliver 50 to 60 million installed base and $10 billion to $15 billion revenue in the same time frame. (Note: Digi-Capital’s base case is that even with 900 million installed base for ARKit/ARCore by the end of this year, AR/VR revenue will only start to scale in 2019.)

To understand what’s happening across the 55 major AR/VR countries and regions, let’s start with VR. 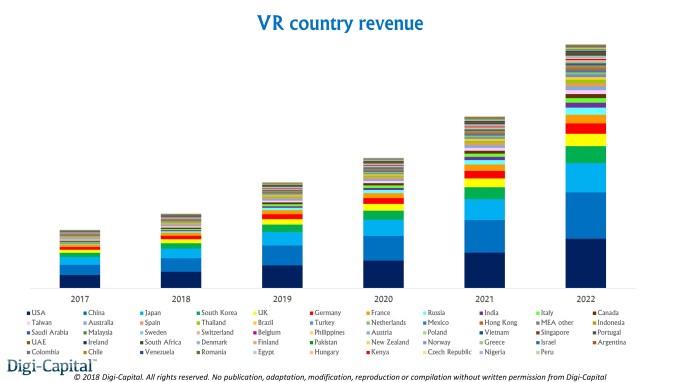 The VR market’s country dynamics have much in common with the wider video games market. The U.S. has a significant installed base of Sony’s VR capable games consoles (banned in China until recently) and high-end VR-capable PCs. It also has highly profitable core gamer economics, which could give it an advantage if premium standalone VR (neither PC nor mobile tethered) hits its stride in a few years. While China has a much larger mobile installed base, mobile/standalone VR’s trajectory took a fundamental hit last year, following the launch of mass-market mobile AR. Combined with lower ARPU for mobile/standalone VR, China is at a relative disadvantage to the West on a per user basis.

The U.S. could take around one-fifth of global VR revenue by 2022, making it slightly larger than China. But while the U.S. could win the VR battle, it might be a small victory. Combining China with other countries in the region (particularly Japan and South Korea), Asia could deliver just under half of global VR revenue in five years — over twice North America. Europe (led by the U.K., Germany, France) could also deliver, but the European region combined might only be slightly larger than either the U.S. or China individually.

China could win the war with AR 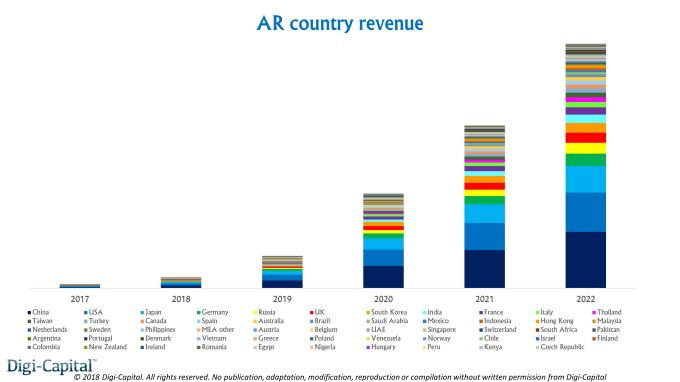 The dynamics of AR look very different. An installed base in the billions is coming for mobile AR. If and when Apple launches smartphone-tethered smart glasses (we’ve been forecasting 2020 for a while now), that market could grow from hundreds of thousands to tens of millions installed base in five years. Because of this distribution potential, a Cambrian explosion of new use cases and business cases is beginning to emerge. E-commerce sales (goods & services, not IAP), hardware sales, ad spend, app store (non-games and games), enterprise and location-based entertainment hold significant promise for AR long-term.

So where VR looks like a subset of the games market, AR’s long-term dynamics could be more like mobile. That’s where China’s natural advantages give it the edge over every other country on the planet (including the U.S.).

Chinese ARCore could have an installed base approaching ARKit’s scale globally long-term. Add to that ARKit itself in China, plus domestic Chinese mobile AR from Tencent, Alibaba and others, and a clearer picture of Chinese scale emerges. Then from 2020, smartphone-tethered smart glasses could become premium peripherals to Apple and others’ phones, again leveraging China’s inherent mobile strength. This could see China dominate global mobile AR and smart glasses’ installed bases long-term.

What does all this mean for AR?

E-commerce could be the largest AR business model, where China (particularly Alibaba) might dominate. Smart glasses hardware sales could come next, with premium Chinese iPhone users core to Apple’s potential long-term smart glasses dominance (whether they call them iGlasses or not). Tencent is in prime position for the third-largest business model of AR advertising, which explains its  battles with Alibaba (although Facebook Camera Effects could generate more revenue internationally). And that’s not to mention Chinese iOS and Android AR app store revenues (both non-games and games), enterprise AR and location-based AR entertainment at scale.

Combining China’s impending AR installed base, business models and economics, and it could see nearly one-quarter of all AR revenues globally by 2022. This is almost half again what the U.S. might produce in a similar time frame. Merging all the country data for a regional view, and Asia could take more than half, Europe less than one-quarter and North America less than one-fifth of global AR revenues.

It’s a small world after all

Installed bases, use cases and economics are great levelers in tech markets, and so it is for AR/VR. While the U.S. might win VR, China could dominate much larger AR. So whoever wins AR also wins AR/VR globally — right now that looks like China by a country mile.

This is not to say that the U.S. and other western countries can’t do very well from AR/VR long-term (indeed, we forecast that they should). However Asia, China in particular, is critical to the future of the market. Global players need to find a way to compete, or risk being left behind. While Apple could do well as always, for everyone else it’s all to play for.