OfferUp, the mobile marketplace for buying and selling locally, is expanding its sights beyond your neighborhood. Today, the company is announcing an expansion of its service that will now allow sellers to ship their items nationwide to interested buyers, potentially netting them a larger audience than if trying to sell only within their local community.

The feature to browse the items outside your area will appear in a separate “shipping” tab in the new version of the OfferUp app for iOS and Android, arriving today.

When sellers list an item, they’ll have the option to toggle on a switch to “sell & ship” nationwide. They then pick the item’s weight from the options that appear (up to 20 lbs). Items must also be under $500, and are shipped via USPS. Buyers are kept up-to-date on the item’s status through the app, as well. 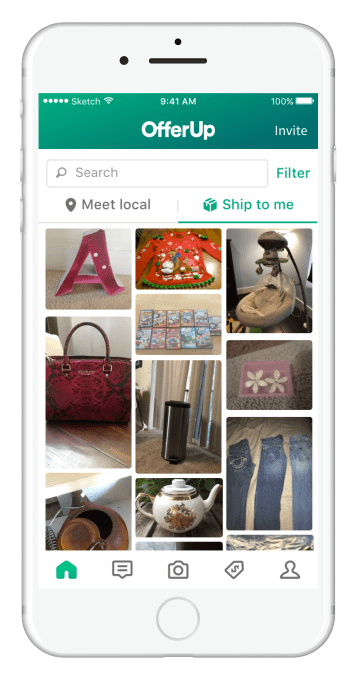 Listing items for nationwide shipping is free. Sellers are paid after the item is sold, less a 7.9 percent fee, which goes to OfferUp. (This is less than eBay’s standard 10%).

The transaction fee represents a new revenue stream for OfferUp, which before had offered paid tools to promote items for sale, but not a cut of transactions.

The company declines to say how much it makes from its existing paid offerings and ads, or if it’s turning a profit. Likely it needs to enter into transactions like this, to grow its revenue and justify its $220 million in VC investment and unicorn valuation. (The Information reported in December it was having trouble raising, so it may have needed this new path to revenue.)

The move will also pit OfferUp in more direct competition with eBay, which it already outranks in the App Store’s Top Charts where it’s No. 3 to eBay’s No. 8 in the Shopping category. While eBay still has a much larger user base – 171 million globally active buyers, as of its most recent earnings for example – OfferUp has managed to grow to over 42 million uniques during the past 12 months, just here in the U.S.

Longer-term, OfferUp aims to go international and including a shipping feature would be the first step.

“We definitely have global ambitions as a company,” says OfferUp co-founder and CEO Nick Huzar. But, he cautions, “we want to feel like, as a company, that we’re in the right spot to do that. So we don’t have a date in mind to do that.” The company claims to reach buyers and sellers across the country, and not just in urban metros. And it claims its buyers are interested in a range of products, as opposed to favoring those in a single category or two.

“I think that’s why people come back so often,” says Huzar, explaining why users will return to the app, on average, 2 or 3 times per day. While furniture is popular because it’s a local marketplace, he adds, OfferUp users browse all kinds of things – from electronics to clothing to baby needs and even cars.

“It’s not like Amazon where it’s very intent-based – where you know what you want. OfferUp is more discovery-based. You go in there and you kind of look around and you find that thing you didn’t think you wanted that you end up buying,” Huzar says. 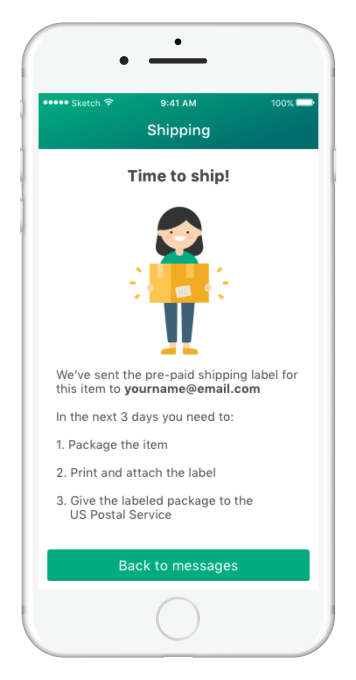 The app has also grown in popularity because of its systems to make transactions more trusted than those on Craigslist, which has been one of OfferUp’s bigger competitors to date, along with Facebook’s Buy/Sell Groups. Users on OfferUp can optionally verify their identity with Driver’s License uploads, and/or by confirming their phone number, Facebook or email. Users can also rate transactions, and see sellers’ response rate to questions, among other things.

The shipping feature has been in testing for a few months prior to today’s nationwide launch across the 48 contiguous U.S. states. To gain access to the option, you’ll need to update to the latest version of the OfferUp app on iOS or Android.