Over three years after Google paid $25 million to gain the exclusive rights to the “.app” top-level domain, the company is at last making .app domains available to register starting today and running through May 7, at 9 AM PDT via Google’s Early Access Program. The following day, May 8, the domains will go on sale for the general public, including through other registrars.

The new top-level domain (TLD) is an obvious choice for app developers and others in the tech industry, as it serves as an easy-to-remember alternative to .com domains – where inventory has long been running low for popular words.

In addition to the expected demand, Google is requiring HTTPS for all. app websites. This built-in security protects against ad malware, tracking injection by internet service providers, and safeguards against spying on open Wi-Fi networks, the company explains.

Google has been an advocate of pushing the web towards HTTPS adoption, noting last fall that 64 percent of traffic through its Chrome browser on Android was protected, up from 42 percent the year before. Chrome traffic on Mac was up to 75 percent, and on Windows up to 66 percent at the same time. The increases were due to a number of actions on Google’s part, including its decision to flag all websites using HTTP to transmit private information as “insecure.”

This year, Google said it would mark all pages without HTTPS encryption as insecure starting in July with the launch of Chrome 68.

Given its plans, it makes sense that Google’s new domain addition would also include HTTPS protection built-in.

Still, it’s something of a milestone, Google notes.

“Because .app will be the first TLD with enforced security made available for general registration, it’s helping move the web to an HTTPS-everywhere future in a big way,” the company writes in its announcement of the new TLD. 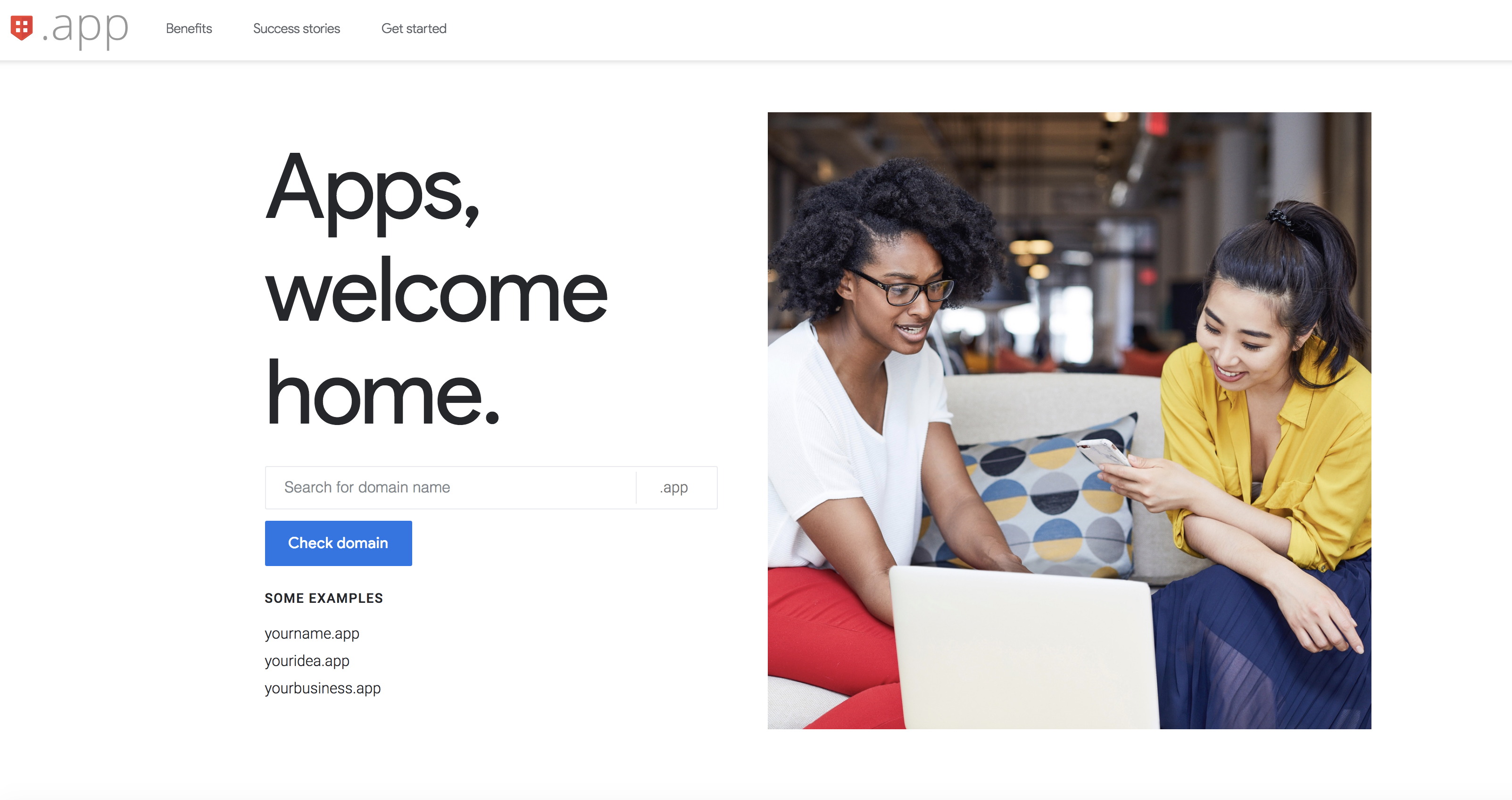 Prior to the public launch of .app, Google had reached out to potential candidates, offering them a first crack at grabbing a .app domain in order to showcase the potential use cases. Some of those who are already live on .app domains include Outdoor Voices, Cash App, Sitata, Albert, Picnic, Trail, BNEXT, Bark, CallApp, The Podcast App, Pickle, MenaVR and many others from around the world. (A list is here.)

The company also removed the requirement that limited the domain to app developers, though Google suggests the name makes the most sense in that market.

In an interview last month with Domain Name Wire, Google said that it aims to make .app domains affordable – it expects the pricing to be less than its other TLDs like .how or .soy, for example. The site said that would mean wholesale pricing would be around $10-12 and retail registrations would be $20. (Pricing was not detailed in today’s announcement, however.)

Interested .app domain shoppers can register their domain of choice today through May 7, 2018 starting at 9 AM PDT, if they want to pay the additional fee for early access ahead of the domain’s launch to the public through other registrars.

Correction: EAP begins today and continues through May 7; apologies for the error