Blue Origin conducted the 8th launch of its New Shepard sub-orbital rocket and crew capsule today out in Texas, and things couldn’t have gone better for the growing space tourism company. The rocket ascended into a cloudless sky, reaching a max velocity of about 2,200 MPH, and delivered its capsule to the edge of space, where its occupant, “Mannquin Skywalker,” will have had a lovely view of the Earth.

New Shepard isn’t meant to deliver things into orbit, of course; Blue Origin has a different purpose and technology from the likes of SpaceX, focusing on giving people a quick, safe lift into space followed by a period of weightlessness and a pleasant descent.

That’s what was demonstrated today, and you can watch the whole thing live in the video below — the pre-launch coverage starts about half an hour in, and liftoff is at the 1h10m mark.

Everything went smoothly from liftoff to touchdown. I love watching the altitude graph filling in slowly at first, then blasting upward as the rocket gradually accelerates. After main-engine cutoff, which occurs just after crossing the Karmann Line, which indicates you’ve entered space, and anyone inside would experience weightlessness for about a minute and a half as the capsule slows down. Apogee for this flight was 347,000 feet, or about 106,000 meters.

While Mannequin Skywalker was enjoying microgravity, the booster was returning to Earth at high speed — over 2,600 MPH. The drag brake deploys around 100,000 feet up, reducing speed to a more manageable 370 MPH before the booster re-ignites at 2,500 feet and brings itself down to a hover landing.

This is one of the most obvious differences to a viewer between New Shepard’s booster and the Falcon 9s; New Shepard has more control over its thrust, allowing for a highly controlled landing where it could even float for a bit if necessary. The larger Falcon 9 has to land using much more powerful thrust, meaning if they aren’t careful, they might just take off again. It’s kind of like the difference between having to let up on the gas to ease into a parking spot, and having to pull the e-brake at precisely the right moment.

Meanwhile the capsule, with its higher apogee and greater drag, has been falling down this whole time, waiting for the right time to deploy its parachutes. It didn’t happen until below the 7,000-foot mark, making me sweat a bit. It wouldn’t be a good look to have your crew capsule impact at 240 MPH. 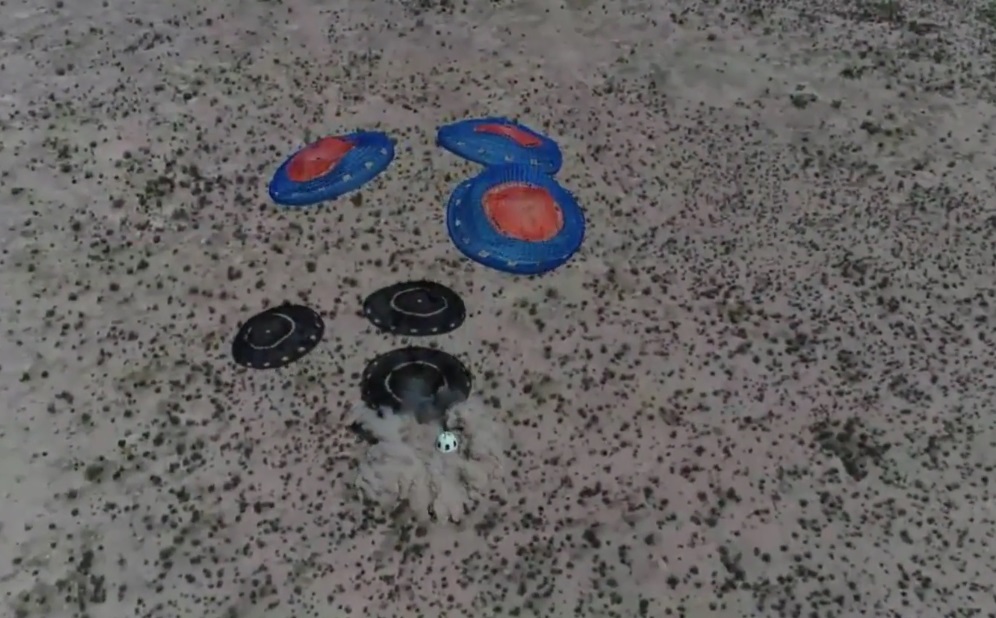 The commentator describes the capsule touchdown a minute or two later as a “beautiful soft landing,” though honestly it looks like it would give anyone inside something of a jolt. Let’s hope the seats are comfortable in that thing.