It’s almost becoming boring reporting that the Amazon cloud had a monster quarter. It’s not news at this point, because of course they did. Yesterday, it once again blew away analyst expectations with 49 percent revenue growth for the quarter. Oh ya, and that revenue? Well that was $5.44B for the quarter, a ways above the projected $5.26B. Ho hum. Another day in paradise for the Amazon cloud.

That’s a $21.76 billion run rate for a business that is but one piece of Amazon’s vast empire. Amazon’s cloud arm, AWS, has been running away with infrastructure services marketshare for a long time. When you consider companies the likes of Microsoft, IBM, Google and Alibaba are chasing them, it makes their run even more remarkable.

Conventional economic wisdom would suggest that the bigger you get, the harder it is to maintain big growth numbers, yet AWS has defied that wisdom and just keeps on growing, quarter after quarter after quarter. It says something about the way Amazon as whole operates. It never backs down and it never gives in.

Meanwhile across the lake, Microsoft was also reporting its earnings yesterday as well, and the cloud numbers were also quite good with what Microsoft calls ‘The Intelligent Cloud’ up 17 percent and Azure earnings up an impressive 93 percent. That was compared to 15 percent growth for Intelligent Cloud and 98 percent Azure growth in the previous quarter.

Microsoft clearly represents the best hope to give Amazon a run for its money and it’s doing its part to make that happen, but even with all of that growth, Amazon just keeps growing too– albeit at a smaller rate at this point, but certainly strong enough to maintain its hefty marketshare advantage.

Canalys, a firm that tracks cloud marketshare numbers says that Amazon’s revenue is nearly double that of its nearest competitor, Microsoft, and far ahead of Google. While Google did not break out its cloud numbers in its earnings report this week, Canalys ranked it third, up 89% for the quarter to US$1.2 billion.

In terms of how that translated into marketshare, AWS continues to own about third of the market, while Microsoft is around 15 percent and Google around 5 percent, according to Canalys’ latest numbers. 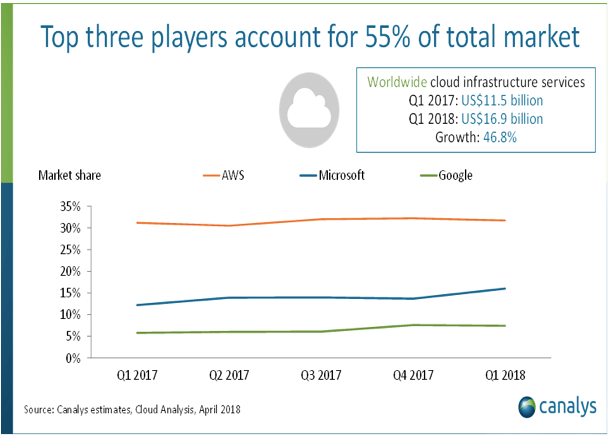 That tracks fairly consistently with Synergy Research Group, another firm that tracks the market. It had Amazon at 33%, Microsoft at 13% with IBM 8%, Google 6% and Alibaba 4%. Synergy’s John Dinsdale says the growth we have seen the last two quarters has been quite remarkable.

“Normal market development cycles and the law of large numbers should result in growth rates that slowly diminish – and that is what we saw in late 2016 and through most of 2017. But the growth rate jumped by three percentage points in Q4 and by another five in Q1,” Dinsdale said in a statement. 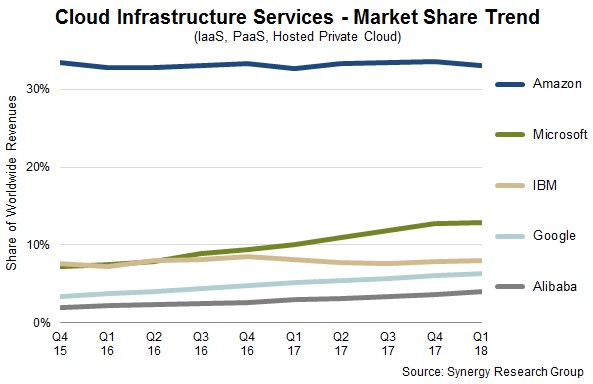 Overall, while the cloud market continues to grow as companies shift more workloads there, the revenue numbers increase, but the marketshare percentages have held relatively steady. Amazon continues to control the vast majority of marketshare, and while there are others chasing them with deep pockets and large investments, it appears that none of these companies is a threat to Amazon’s dominance for now.