Fresh off a massive cascading series of fiascos that has thrown the future of Qualcomm into doubt, the company managed to report a mostly positive first quarter and keep the stock from going into a further tailspin.

Qualcomm has been under considerable pressure for a wide variety of reasons, the most obvious one of which is a massive takeover attempt by Broadcom falling apart. But beyond that, Qualcomm is facing issues trying to close its acquisition of NXP, faces a continued public spat with Apple, and is looking to cut costs as it tries to appeal to Wall Street amid tension over its future as next-generation wireless technology begins to roll out. The company’s operating income fell 40% year-over-year amid its continued sparring with Apple over royalties.

The company ended up finishing with an earnings beat, reporting earnings of 80 cents per share compared to 70 cents per share expected by analysts. The company said it generated $5.23 billion in revenue, compared to $5.19 billion expected by analysts. Qualcomm, beyond just its own specific issues, is heavily dependent on the health of the smartphone supply chain. Apple missed targets expected by Wall Street when it came to iPhone sales, as one potential signal for example. 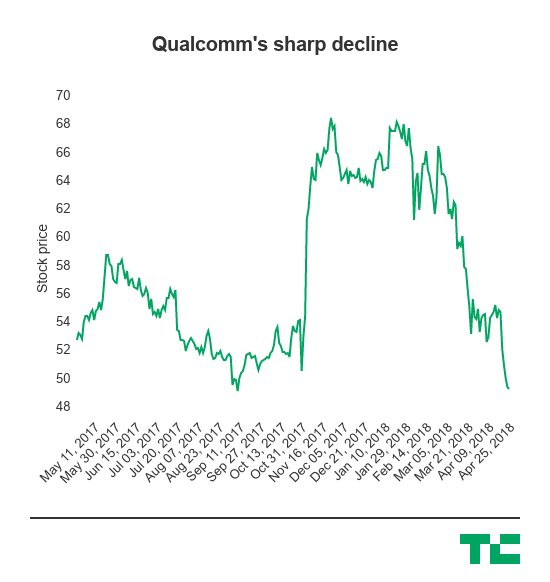 Following the BroadQualm collapse, the company said it would work to reduce its annual costs and cut around 1,500 jobs. This, too, comes at a time when its former chair Paul Jacobs stepped down after he said he would be exploring the possibility of a proposal to acquire Qualcomm and take it private. This, beyond just its fighting with Apple and its attempts to finish off its acquisition of NXP, has ended up shedding a ton of uncertainty as to what will happen to the chip designer.

Broadcom acquiring Qualcomm, in a very tense deal that came down to the White House eventually putting the brakes on the deal, would have consolidated two of the largest fabless chip firms into a single unit — but it’s not clear what Broadcom CEO Hock Tan would have done with Qualcomm, which is currently embroiled in a series of quarrels with Apple over royalty payments. The Trump administration proposed tariffs on Chinese products, adding another layer of uncertainty to the situation.