Amongst massive criticism over data privacy, Facebook showed the resiliency of its advertising machine by beating Wall Street’s $11.41 billion revenue estimate in its Q1 2018 earnings report by raking in $11.97 billion in revenue with $1.69 EPS compared to the $1.35 estimate.

This was perhaps the most tumultuous quarter since Facebook went public. Facebook faced intense criticism regarding the Cambridge Analytica scandal and its data privacy practices, leading a massive pull-back of developer capabilities as Zuckerberg headed to testify before Congress. Last quarter saw Facebook’s first-ever decline in users in a market, with a 700,000 user drop in the U.S. & Canada market following changes to promote well-being that reduced the prevalence of viral videos. 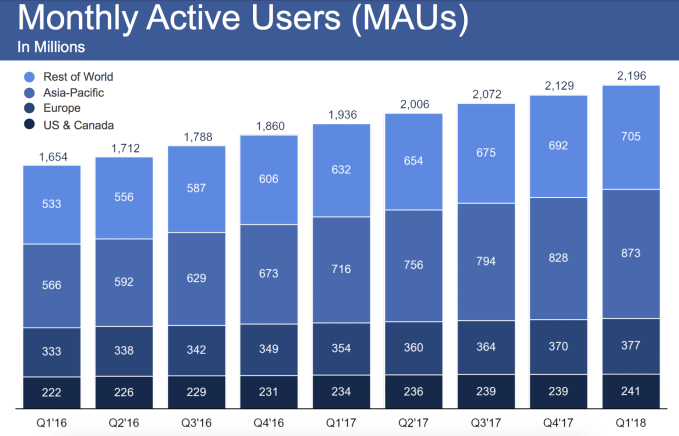 Facebook was able to revive its U.S. & Canada user growth this quarter, perking back up to 185 million, from 184 million last quarter — though that’s just a return to where it was in Q3 2017. Monthly active user count in the market went from 239 to 241 million. That shows that while people might disagree with Facebook’s approach to privacy, they aren’t about to give up their News Feeds.

Demonstrating Facebook’s declining web presence, mobile made up $10.7 billion, or 91 percent of all ad revenue, up from 89 percent last quarter. Facebook reached $4.98 billion in profit, up from a weak $4.26 billion last quarter. Average Revenue Per User reached $5.53, up 30 percent year-over-year thanks to strong gains this quarter in Europe and Asia-Pacific. Facebook’s headcount has swelled 48 percent year-over-year as it’s now half-way to its promise of doubling its security and content moderation staff from 10,000 to 20,000 in 2018. 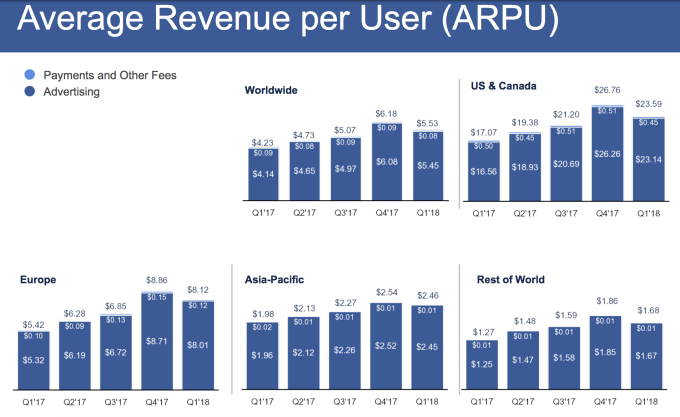 The recent scandals have put a lot of downward pressure on its share price, but apparently the company thinks it’s a good buy. It’s increased the amount authorized under a share repurchase program by an additional $9 billion, on top of an original $6 billion plan, of which it’s spent $4 billion. It’s partly to offset big stock distributions for employees, but CFO David Wehner also said it was “opportunistic,” aka related to Facebook perceiving its price as too low. Wall Street apparently liked the earnings report as shares are up over 4.38 percent to $166.68 in after-hours trading.

The question is whether the new ads transparency requirements, developer platform crackdown and Facebook’s quest to make using it healthier will show up in next quarter’s earnings. These changes could deter advertisers, give users less functionality to play with and remove low-quality viral content that might make users feel bad but keeps them scrolling.

CEO Mark Zuckerberg wrote that, “Despite facing important challenges, our community and business are off to a strong start in 2018. We are taking a broader view of our responsibility and investing to make sure our services are used for good. But we also need to keep building new tools to help people connect, strengthen our communities, and bring the world closer together.” We’ll get to hear more from him at 2pm Pacific during the earnings call, so stay tuned here.

Updates from the earnings call:

Facebook’s Internet.org has connected almost 100M to the “Internet”