Fundraising is never easy, but it’s even harder when the goal posts are being moved around. Such is the challenge facing today’s youngest startups, which are looking at very different fundraising metrics than new startups did just six or seven years ago.

We explored the issue yesterday with Peter Wagner, who spent more than 14 years with Accel as a managing partner before co-founding the early-stage firm Wing Venture Capital in 2013 with another veteran investor, Gaurav Garg, formerly of Sequoia Capital.

Wagner has an obvious interest in how rounds are changing. Wing has to know how much is reasonable to expect to invest in a company, even while it prefers to invest in companies that don’t yet have revenue or customers. In a competitive funding landscape, its now four-person investing team is also looking to raise the firm’s profile by publishing smart industry research, including, not so long ago, on the state of IoT.

Whatever Wing’s motivations, its findings are worth tracking if you’re a founder who is thinking about raising either a seed or Series A round any time soon. More from our chat with Wagner, along with Wing’s data, follows.

TC: Your second fund, $300 million, was nearly twice the size of your $160 million debut fund. Do you expect your third fund will be even larger? Is this going to be an Accel-size firm some day?

PW: No, we’re actually working hard to keep a lid on our fund size. Early-stage investing doesn’t scale. For us to grow, we’d have to change our investing strategy.

TC: So many firms are doing exactly that, with the notable exception of Benchmark, which has maintained its fund size for the last 18 years roughly.

PW: I was at Accel when we were [expanding into] having a later-stage practice. We sought out different skills [from potential hires] because it’s a different process. It fact, the more we learned about it, the more we realized how different a discipline it is.

TC: Given that you’re so focused on early-stage financing dynamics, tell us what you’ve learned. How did you put together this new report?

PW: We looked at companies that were funded by the 20 or so leading venture firms between 2010 and 2017. It’s 2,700 companies altogether, and 5,800 financings. If a company raised a seed fund from another firm, but Sequoia led its Series A, all of its financings rounds, including that seed round, were incorporated into our research. We also focused on these companies’ downstream financings [no matter the investors].

TC: So some of these companies are pretty new. Others are eight years old. What should founders know about the numbers? 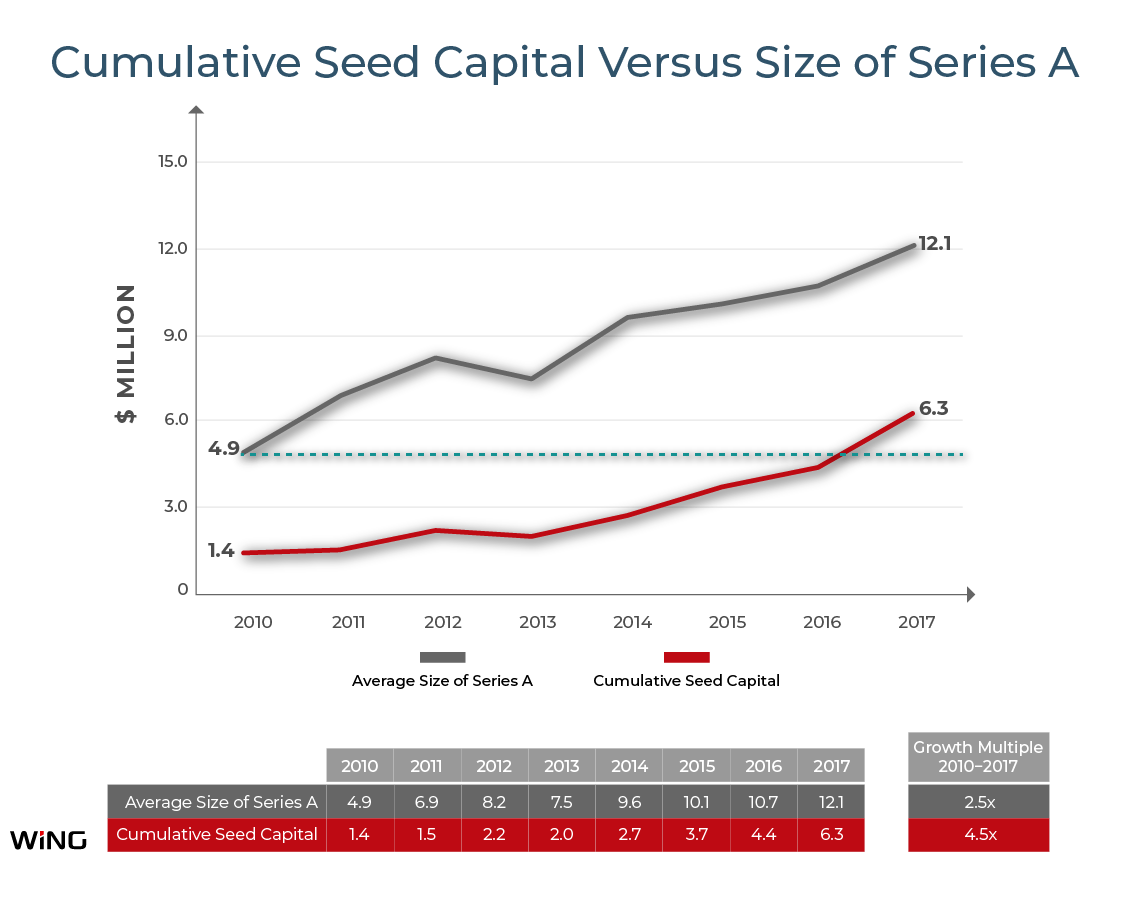 TC: That’s a big uptick. Do you find it concerning at all?

PW: Not necessarily. It’s a reflection of the changing strategies of major venture firms. Those defined as Series A investors have mostly adopted a later-stage posture and at scale. And when you’re scaling a venture firm, you’ll do more later-stage investing because you can invest more money. That’s one of the things pulling up Series A sizes.

TC: Looking at another of your charts, it looks like the companies raising A rounds have to be a lot further along than was formerly the case. That’s not exactly a news flash, but it’s still interesting. Perhaps more telling is that 67 percent of them were already generating revenue, unlike 11 percent of their peers in 2010. The same is playing out for seed investments.

PW: Yes, just 9 percent of seed-funded companies were generating revenue back in 2010; last year, more than half of them were. 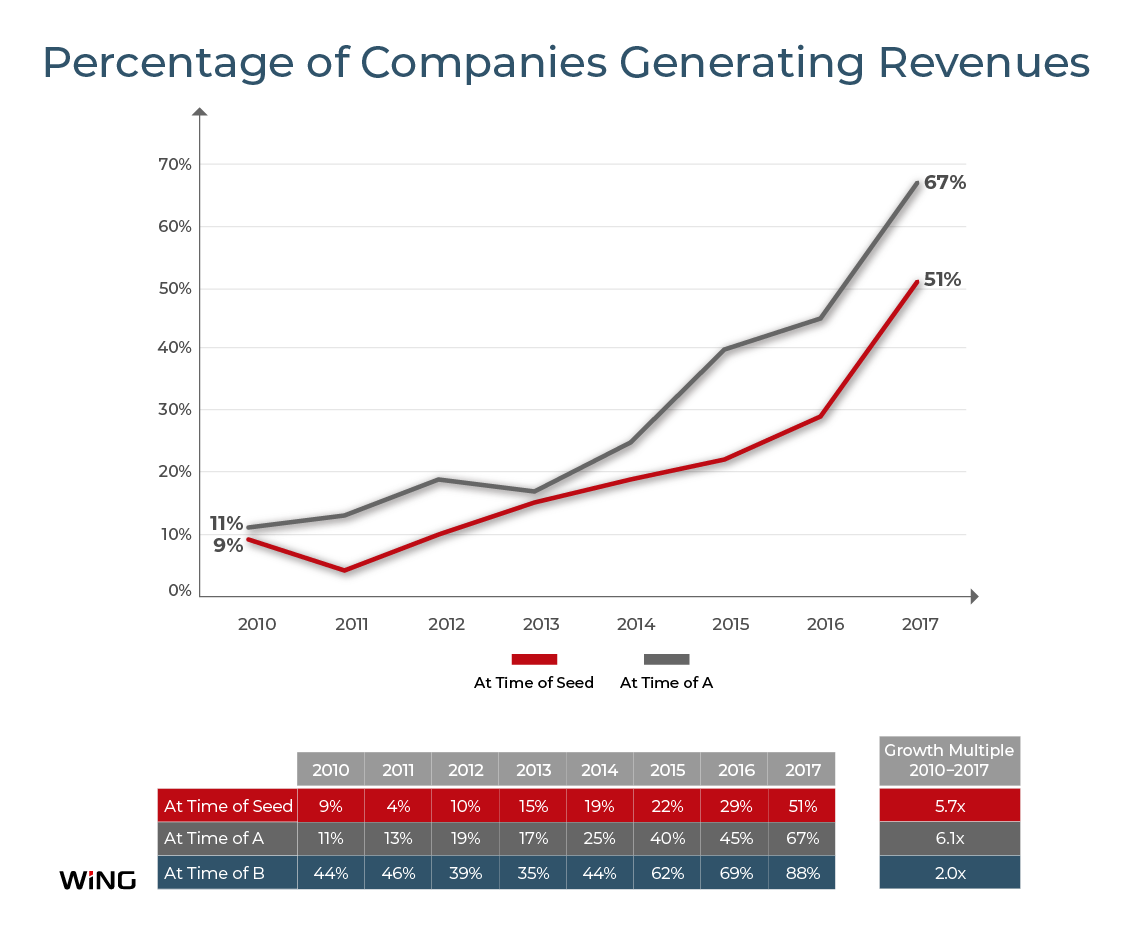 VC: So much for “venture” investing. Since everyone is taking so much less risk on these companies at the seed and Series A stage, are early-stage VCs getting less in terms of their ownership of these startups?

PW: Ownership percentages [outside of Wing] are hard to get, other than in IPO prospectuses. Based on anecdotal data and what I’ve observed, major firms are still looking for the same ownership percentages. They’re just paying a lot more for it.

That seems not great for founders, who are giving away part of their company with every financing. 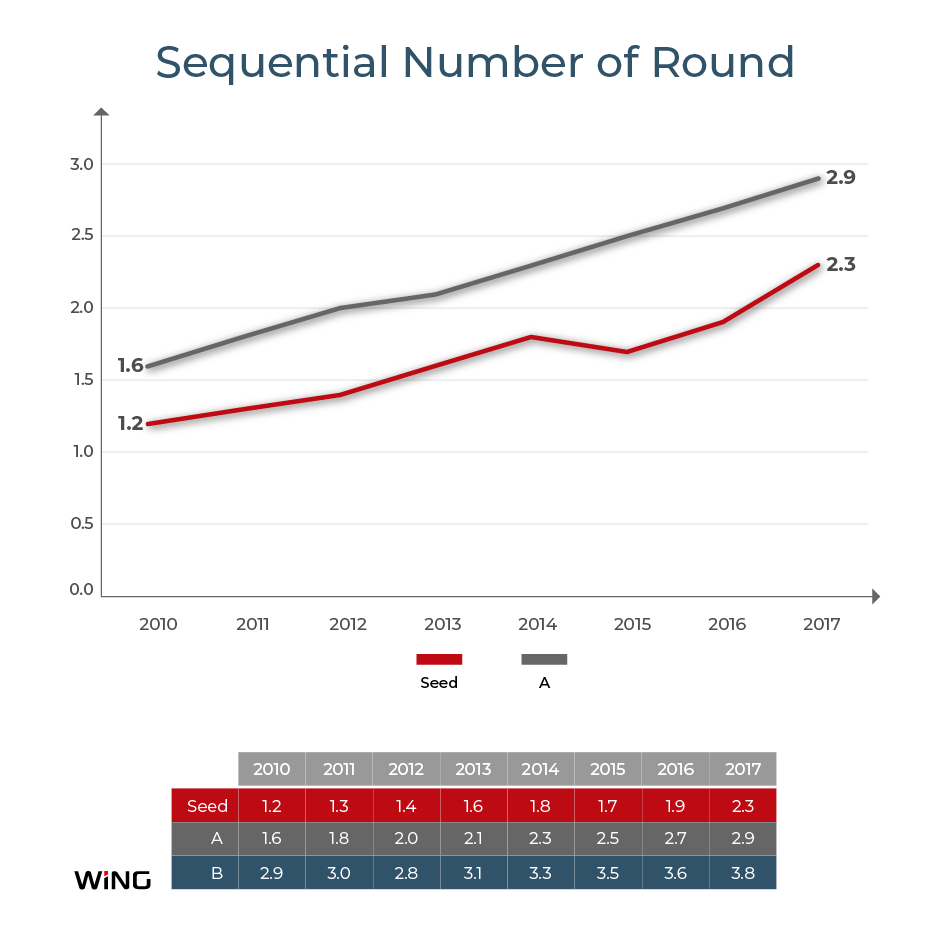 PW: As you know, “pre-seed” is a thing now, as are “seed plus” financings. So you have this segmentation within the world of seed before you get to post-adoption, where you have some evidence that things are working and investors can see how rapidly. Seed is the new A.

As for whether founders own less because of this trend, that’s a hard one to track, again because ownership stats are the last ones you’ll find.

TC: Well, you’re investing very early on, at the pre-seed or pre-adoption phase in many cases. Are you still taking the 20 percent that you looked to own when you were doing Series A deals that looked more like seed deals?

PW: Ideally. Other times, we’ll start with a smaller position and build up to that. We play the role of go-to partner, so we want to be in that ownership position.

TC: With things shifting around so much, where is the Valley of Death these days? You obviously have to have a strong startup to land Series A funding.

PW: It’s interesting. Major firms have adopted these scaled-up strategies and they’ve outsourced a lot of the adoption work to investors and incubators and angel investors, who are launching a fleet of a thousand ships. That enables the firms to hang around and see which startups look the best and pick and choose.

What’s notable is they don’t have as much vested interest in companies at the Series A because it’s very different when you make a new investment versus a follow-on investment. It used to be that individuals at these venture firms were involved much earlier.

I’m not sure if that’s a healthy or unhealthy development. But it does mean that seed firms have been presented with this expanded territory from which these other firms have backed away. Somebody has to do the foundation building. It’s a great opportunity for seed investors to play a bigger role, but it can certainly be a confusing time for founders, with investors changing, along with the criteria for who you let into your inner circle.

TC: You’ve been in venture for more than 20 years. Is there a correction coming or has something fundamentally changed?

TC: Do you think venture firms should be raising such gigantic funds right now, given this likelihood?

PW: The last time around [in the late ’90s], a bunch of people raised really big funds and wound up releasing half the capital or more back to their limited partners when the market changed. Returns on big funds have always disappointed. Things do change and tech is a much more important ingredient. But I do think this is still a boom-bust business. 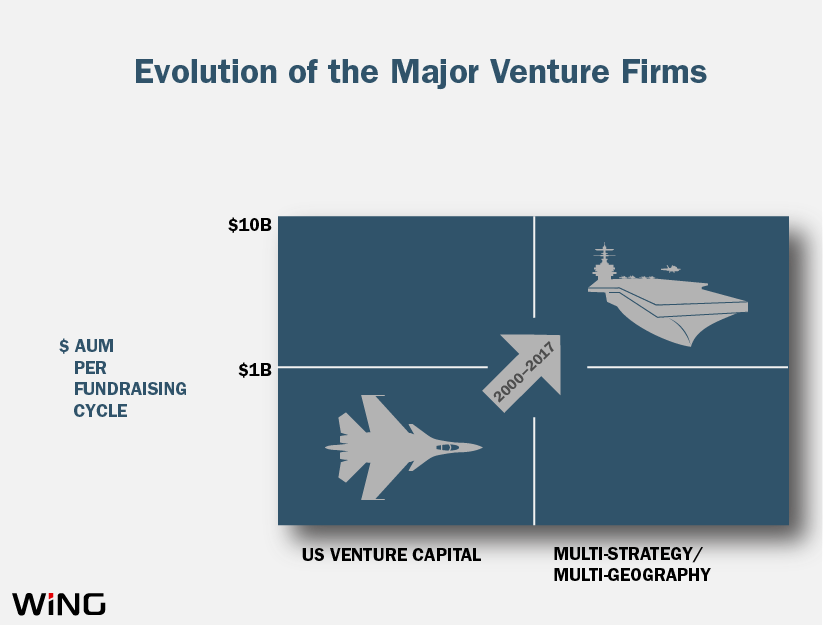