Credit Karma is best known for being the only reason anyone is ever willing to peek at their credit score, but the company has other things it wants you to be less stressed out about too.

After introducing a free identity monitoring tool for its users late last year, Credit Karma is widening the scope of its fraud-fighting scans to include data from the dark web.

By checking its own database of 80 million Credit Karma users against the information in both pools of data, the company can give users a heads up when their info is compromised.

“The problem is pervasive and the data set that we have is relatively comprehensive,” Anish Acharya, Credit Karma’s vice president of data products, told TechCrunch. Credit Karma partnered with security firm SpyCloud for its databases.

As the company mixes in the new dark web data, affected Credit Karma users that pop up in its scans will receive an alert so they can find more contextual information through the free tool and lock down their accounts accordingly. Credit Karma users can even specifically view which of their passwords are no longer safe to use so that they know which passwords to change. 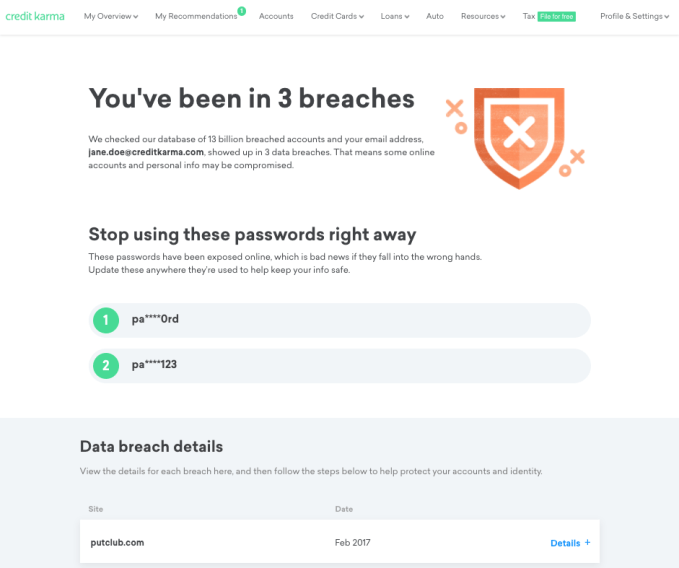 The company estimates that 65 percent of its users have experienced a data breach, whether they know it or not, so Credit Karma is well-positioned to issue a wake-up call about protecting identifying information online.

According to Acharya, the ID-monitoring tool grew out of the same beliefs that inspired Credit Karma’s namesake product.

“It follows that same sort of philosophical point,” Acharya said. “This is really a set of information that consumers need to be empowered with.”

Much like its relatively stress-free credit score checks, Credit Karma wants to make its users less freaked out by the idea of identity theft — an unavoidable relative of leading an online existence.

“The goal is actually decreasing fear and anxiety by empowering consumers,” Acharya said. “It’s a very scary conversation… it’s not a conversation you’re having with friends over a beer — [not] today at least.”

Credit Karma’s dark web monitoring service is available now to consumers through the company’s app (check ID Monitoring in the Settings menu) and through the Resources tab on the Credit Karma website.