Gender discrimination may be a hot-button issue here in the U.S., but we don’t have a monopoly on the practice by a long shot. A new report from Human Rights Watch highlights widespread and blatant discrimination in Chinese job descriptions, despite its ostensibly being illegal there. In fact, the highest incidence rates were found in government jobs.

The report looked at 36,000 job descriptions posted in the last few years, including 2017 and 2018 listings for civil service and government jobs. The authors note that their work was conducted under increasing hostility and suppression of the topic by Chinese authorities, meaning no cooperation (but perhaps some interference) was expected.

Thousands of the listings included such language as “men only,” “suitable for men,” or the like, for example “need to work overtime frequently, high intensity work, only men need apply.” In the civil service category, this happened in as frequently as one in five listings, with no corresponding “women only” language except in a single 2018 job. In the Ministry of Public Security, more than half the jobs required the applicant be male. 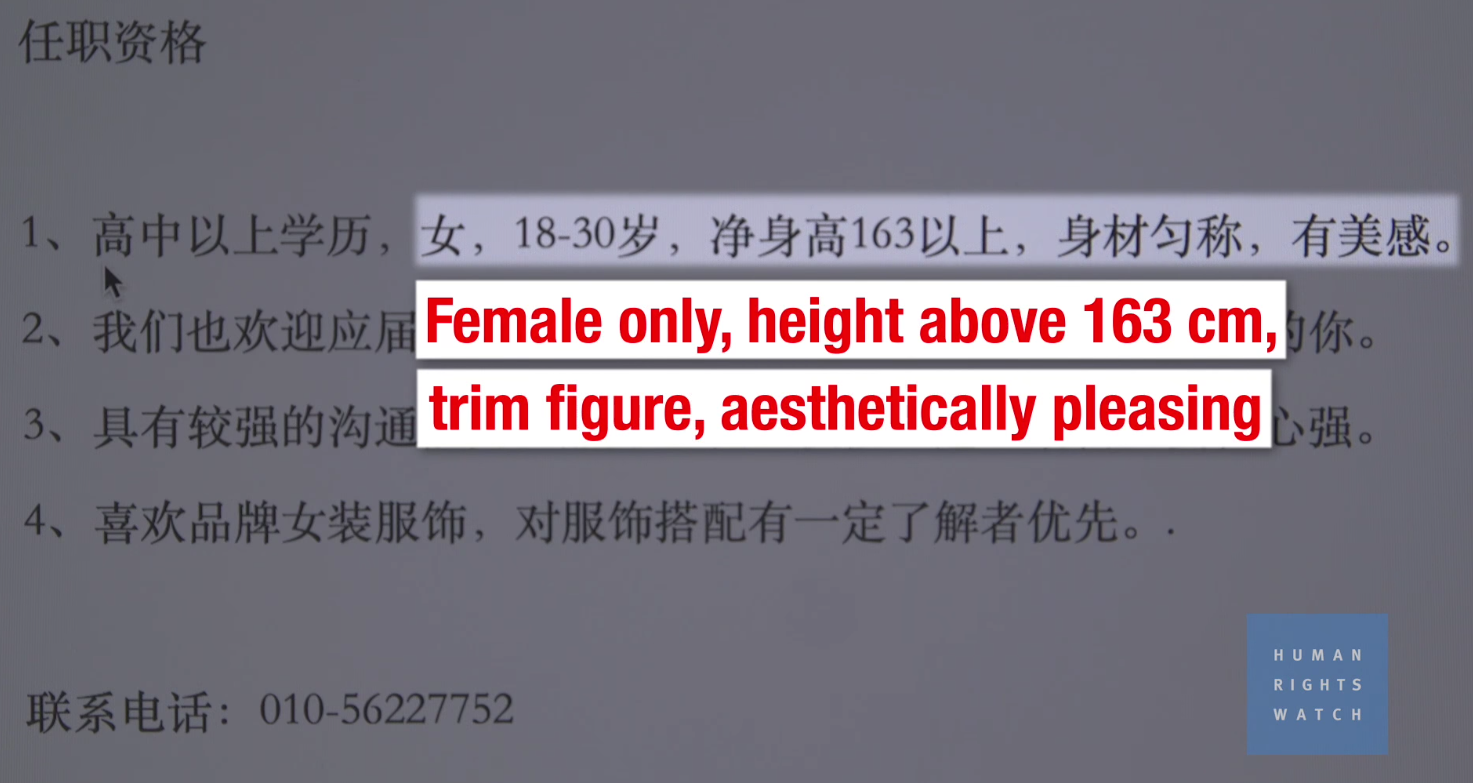 When women are permitted or requested to apply, they are subject to gendered requirements: be married with kids, for instance. But more common are appearance-based demands: to be a train conductor, a woman must be between 5’1″ and 5’6″, weigh less than 143 pounds, and have “normal facial features, no tattoos, no obvious scars on face, neck or arms, good skin tone, no incurable skin conditions.”

Women lucky enough to already be employed in major companies like Baidu and Tencent are used as lures for male applicants: these “goddesses” are presented as potential matches, as in this Alibaba ad: “They are the goddesses in Alibaba employees’ heart—smart and competent at work and charming and alluring in life. They are independent but not proud, sensitive but not melodramatic. They want to be your coworkers. Do you want to be theirs?”

Of course we shouldn’t throw rocks, at the risk of shattering our own glass house of sexism and other discriminatory practices over here, but it is worth being reminded that this is a worldwide and deeply seated phenomenon.

You can read the full report, “Only Men Need Apply,” here. Its recommendations, though the Chinese authorities seem unlikely to heed them, are to modernize laws relating to discrimination and enforce the ones that exist. China is in fact party to some international agreements to guarantee its citizens certain rights and quash discrimination when it is detected, so that may work as leverage.