Prenetics, a Hong Kong-based startup that offers genetic testing services for patients, is expanding outside of Asia and into the consumer space after it acquired London-based company DNAFit.

The deal — which a source told TechCrunch is worth $10 million — not only sees Prenetics enter new geographies, but also expand the scope of its services. Prenetics, which includes Chinese e-commerce giant Alibaba among its backers, works directly with insurance firms and physicians who use its testing service for their customers and patients, but DNAFit goes straight to consumers themselves.

Five-year-old DNAFit sells a test that profiles an individual’s DNA to help them to figure out the fitness and nutrition setup that is best suited to them. DNAFit’s kits — which cost up to £249 ($350) and take 10 days for results — are sold online and via employee packages.

The company said it has sold its product to around 100,000 people with companies including LinkedIn, Talk Talk and Channel 4 among its corporate clients. High-profile backers include Olympic gold medal-winning British athlete Greg Rutherford, who said the results helped him make “clear, informed decisions” on his training regime.

Prenetics has been considering global expansion options for some time, and this acquisition gets its foot in the door in new markets while also tackling the consumer health market, too.

“We definitely plan on investing and growing our reach in Europe for the DNAFit business. In addition, Prenetics International will be focused on a B2B with insurers and for corporates,” Prenetics CEO Danny Yeung told TechCrunch via email.

“At the same time, DNAFit is a partner for [fitness company] Helix in the U.S., thus we plan on investing further on customer acquisition and growing our reach in the U.S.,” Yeung added. “We are extremely excited at the potential to bring DNA testing to a global market, making an impact on the lives of many.”

In another tie-up primarily targeted at the U.S., an offer for 23andMe customers allows them to use their results and pay $79 for DNAFit. 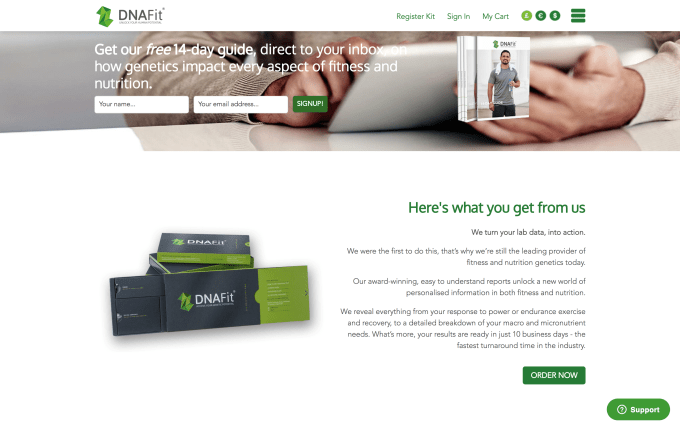 This marks the first piece of acquisition for Prenetics, which last year closed a $40 million Series B funding round led by Beyond Ventures and Alibaba Hong Kong Entrepreneurs Fund. Yeung told us at the time that a portion of that capital would be reserved for meaningful acquisitions as the startup aims to go beyond its early focus on China, Hong Kong and Southeast Asia. At the time of that funding, which happened in October, Yeung said Prenetics had processed 200,000 DNA samples.

Prenetics started out as ‘Multigene’ in 2009 when it span out from Hong Kong’s City University. Yeung joined the firm as CEO in 2014, after leaving Groupon following its acquisition of his Hong Kong startup uBuyiBuy, and it has been in startup mode since then. Prenetics has raised over $52 million from investors which, aside from Alibaba, include 500 Startups, Venturra Capital and Chinese insurance giant Ping An.