Google’s internal incubator, Area 120, is today releasing its next creation: a learn-to-code mobile app for beginners called Grasshopper. At launch, the app teaches would-be coders how to write JavaScript, via short lessons on their iPhone or Android device. The goal is to get coders proficient in the basics and core concepts, so they can take the next steps in their coding education – whether that’s taking online classes, attending a bootcamp, or playing around in Grasshopper’s own online playground where they can create interactive animations.

Like other Area 120 projects, Grasshopper was built by a small team of Googlers, who had a personal interest in working on the project. 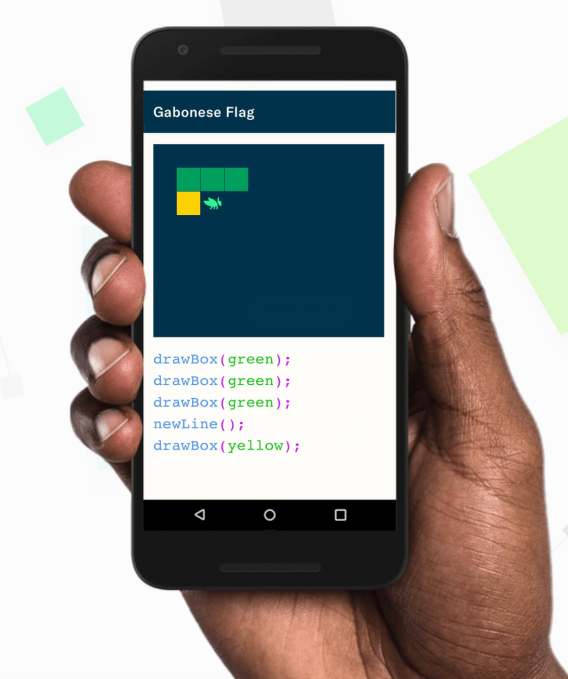 “Coding is becoming such an essential skill, and we want to make it possible for everyone to learn even when life gets busy,” the app’s About Us page explains. “We made Grasshopper to help folks like you get into coding in a fun and easy way.”

Area 120 has now been around for just over two years, but Google’s hadn’t heavily publicized its efforts until last year, when it launched a dedicated website for the incubator. To date, Area 120 has released things like Advr, an advertising format for VR; personal stylist Tailor; emoji messenger Supersonic; a job-matching service in Bangladesh, a booking tool called Appointments; and the YouTube co-watching app UpTime.

The incubator’s goal – beyond potentially finding Google’s next breakthrough product – is to retain talented engineers who may have otherwise left the company to work on their own passion projects or startups.

Grasshopper – whose name is a tribute to early programming pioneer Grace Hopper – was already known to be one of the projects in the works at Area 120.

However, it hadn’t launched to the public until today.

The app itself offers a series of courses, beginning with “The Fundamentals,” where users learn how code works, along with various terminology like functions, variables, strings, for loops, arrays, conditionals, operators, and objects. Grasshopper then moves into two more courses where coders learn to draw shapes using the D3 library, and later create more complex functions using D3.

The courses are actually designed as a series of puzzles and quizzes that increasingly get more difficult, explains Laura Holmes, founder of Grasshopper.

“Each coding puzzle has the student writing real JavaScript code using a custom built code editing environment. The student is given a challenge, and the user has to solve it using code, but it only takes a few taps to write out,” she says. “Each time the student runs code, they’re given real-time feedback to help guide them towards solving the challenge. Many students have told us that this real-time feedback feels like a tutor, since the feedback feels so tailored to the student’s current state.”

This curriculum will expand over the next couple of months. Grasshopper will add more content to The Fundamentals section as well as a new course.

The team says it’s not currently focused on expanding beyond JavaScript, a language used by over 70 percent of professional developers, the site notes.

“We see Grasshopper as a launchpad to help introduce people to code. For one-third of our users, Grasshopper is the first time they’ve ever encountered coding,” says Holmes. “Many people think that coding isn’t for them or don’t have the access and time needed to consider it as a viable career path, and we want to help change that perception,” she adds.

In early tests, there have been over 5,000 graduates from Grasshopper’s program. 47 percent were students from backgrounds that are traditionally underrepresented in tech, and 68 percent of users said they’re more motivated to learn to code after using Grasshopper.

Holmes, a senior product manager at Google, leads the Grasshopper team. She was previously the first Product Manager on Project Fi and Google Tag Manager.

The Grasshopper app is now available worldwide on both iOS and Android, but only in English.