Coverfox, one of a handful of companies aiming to digitize insurance in India, has landed fresh funding via a $22 million Series C round that will be used to push into more rural parts of the country.

The investment is led by IFC, a sister organization of World Bank, and U.S. insurance firm Transamerica, with participation from existing investors SAIF Partners, Accel and Catamaran Ventures, the fund from Infosys co-founder Narayana Murthy. The company confirmed the round was actually closed in two phases, which explains why media reports around the Transamerica investment surfaced last June.

Based in Mumbai, Coverfox is a digital platform that aggregates insurance options. Currently, it works with 35 partners to offer some 150-plus packages that span health, car, bike, life and travel insurance policies in India.

Today’s announcement takes Coverfox, which was founded in 2013, to $39 million raised from investors.

Many of those same Coverfox backers have also funded digital insurance firm Acko, which was started by Coverfox co-founder Varun Dua last year. Acko and Dua made headlines when, nearly a year ago, the startup announced a $30 million seed investment round that came in before a product had even hit the market.

Acko got its license from the Insurance Regulatory & Development Authority of India (IRDAI) in September to go into business, and it again attracted headlines for its relationship with Amazon. The e-commerce firm was said to be in talks to invest (no deal has been announced) while Dua himself said the company was planning to develop products for the e-commerce giant, and potentially others of that scale too.

To date, though, Coverfox isn’t working with Acko, according to its CEO Premanshu Singh.

“We don’t work with Acko at all, and we don’t plan to work for next three to six months at least,” he said in an interview with TechCrunch, explaining that the company is going after larger insurance providers initially.

He also dismissed the potential for consolidation between the two despite the common investor base.

“Both entities are very different, with separate teams and different office locations. We can’t visualize anything strategic coming up,” Singh added. 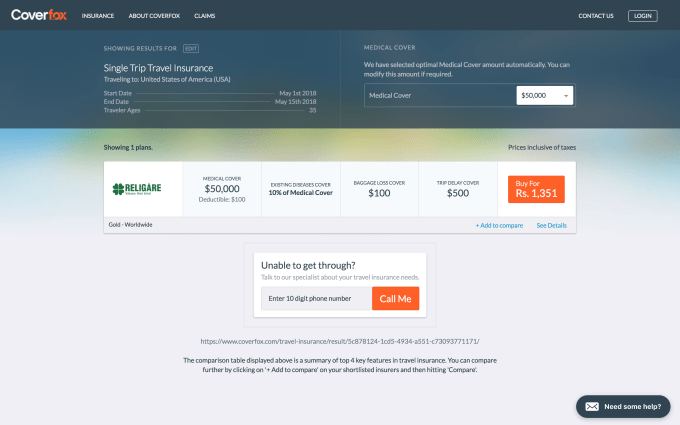 Coverfox itself said it has seen “impressive momentum and scale” lately, which Singh clarified as four-fold revenue growth over the past year, although he declined to give specific figures. The company plans to double down on growth and use the new money to expand into India’s tier-two and tier-three cities, where it said that insurance coverage is 35 percent lower than in urban areas, while coverage among women is lower still at 40 percent below that of men.

The company also plans to put additional capital behind its Coverdrive app for Android, which is designed to equip insurance sales staff, who previously worked almost entirely offline, with digital-first materials to help grow their business using the Coverfox platform.

Coverdrive is a smart addition because it helps the company tackle the long tail of rural India without initial investment upfront. Instead, insurers use its service to boost their own business, thereby growing Coverfox sales at the same time.

Singh said Coverdrive accounts for around one-quarter of Coverfox sales. But that isn’t its only focus in tier-two and tier-three markets, where the company will roll out its own staff and focus on listing related policies.

Citing the growth of mobile data usage in rural India and a growth in digital as internet banking chips away at the bank assurance model used by most insurance brands, Singh said that rural India is better positioned for expansion than in previous years.

Coverfox isn’t yet looking at overseas options despite Singh explaining that there has been a considerable volume of inbound requests.

“It’s going to happen for sure [but] we haven’t decided where to go first,” he said.

Likewise, the model isn’t decided on either. Beyond a straight-up expansion, Coverfox could move into new markets via partnership or franchise.