In this report, we look at venture and seed investment trends in female-founded startups over the last five quarters. For this time period, we look at more than 9,119 venture deals and 6,802 seed deals for companies with founders associated.

To begin, $3.6 billion was invested in companies with at least one female founder in Q1 2018. That result was up 60 percent from Q1 2017’s $2.2 billion tally but down from Q4 2017 by 30 percent. We fully expect this amount to go up as more fundings are added for the quarter retroactively. 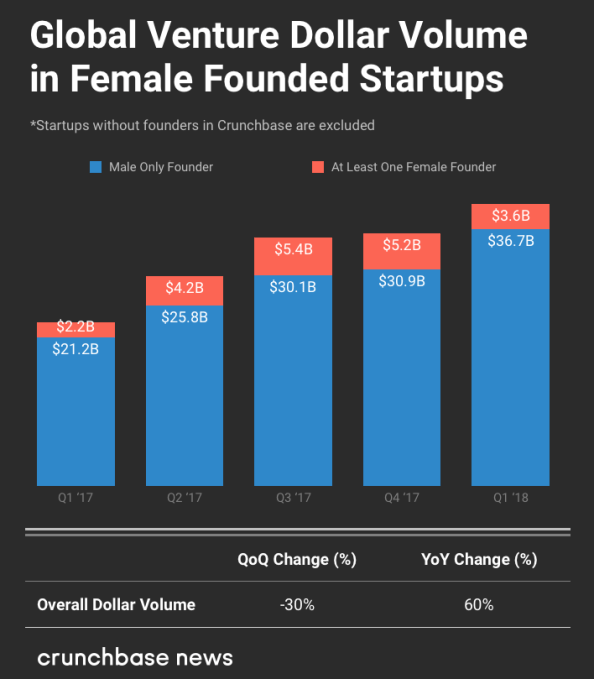 When we narrow the criteria, however, the figures fall. In the Q1 2018, three percent of venture dollars were invested in solo female founders. 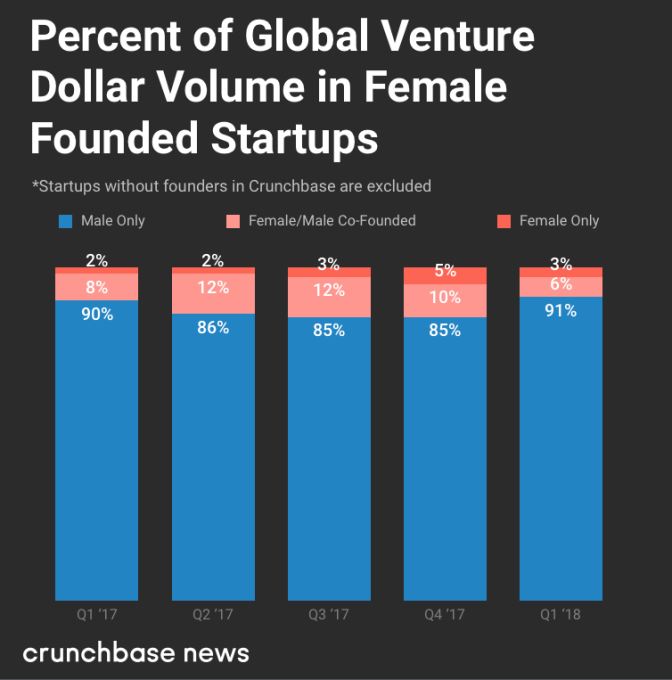 From a deal volume perspective, Q1 2018 saw 14 percent of venture deals include at least one female founder. That result mirrored the year-ago, Q1 2017 figure. However, in line with what we saw when looking at 2017’s dollar volume breakdown between teams with and without women, the interim quarters showed a higher deal count at 15 and 16 percent of all venture deals. 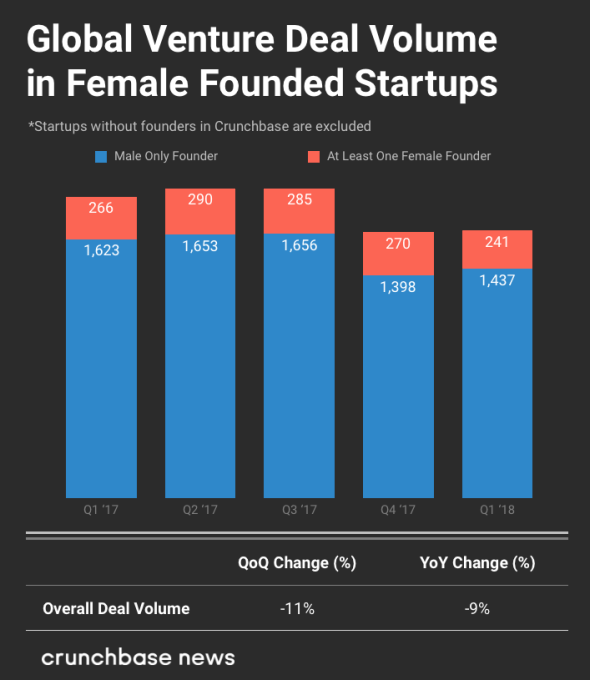 While the deal and dollar volume progress will disappoint many, inside the data are a host of interesting deals that we’d like to highlight. However, in the interest of space, we’ve selected three to share.

Here are the notable venture deals made in Q1 2018 with female founders that caught our eye:

Next, we’ll turn to who is cutting the checks. Or, more precisely, which firms are investing in companies with female founders.

Investors that represented the highest deal count in startups with at least one female founder include Sequoia Capital with seven investments and Omidyar Network with New Enterprise Associates at five each for Q1 2018. 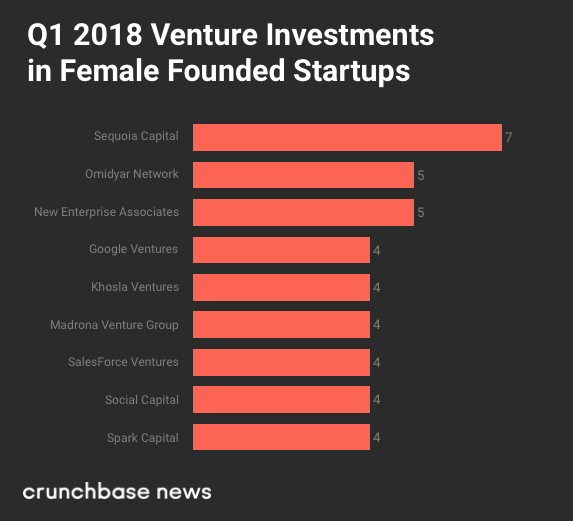 But, of course, investors have different focuses, especially when it comes to startup maturity. So, to that end, we’ll break down investment into companies with female founders of one particular stage.

Overall, seed is a leading indicator for venture, and it has been growing year over year in absolute dollar terms and by percent since 2009 when we first started measuring these trends. That means that if the percentage of deals and dollars at the seed level that women are raising is going up, we may be able to expect more women-founded early, middle and late-stage companies to raise venture capital in time.

Here’s a look at the dollar volume of seed capital invested into companies with and without female founders: 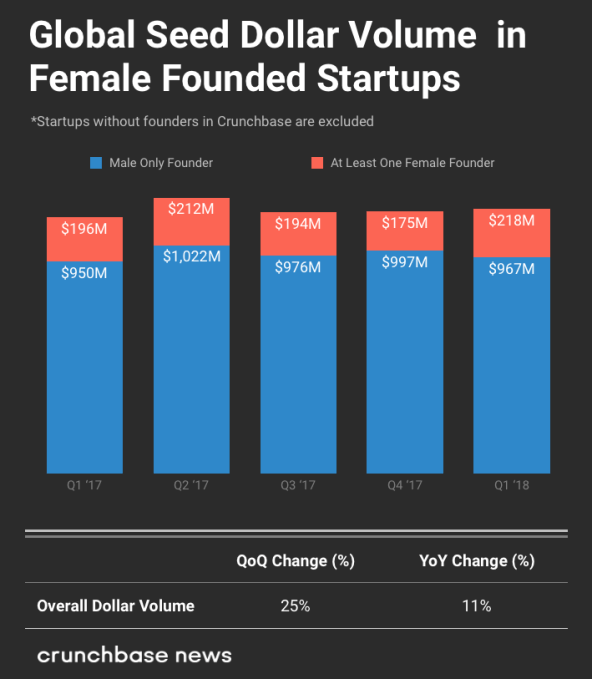 Next here’s the same data in relative percentage terms. 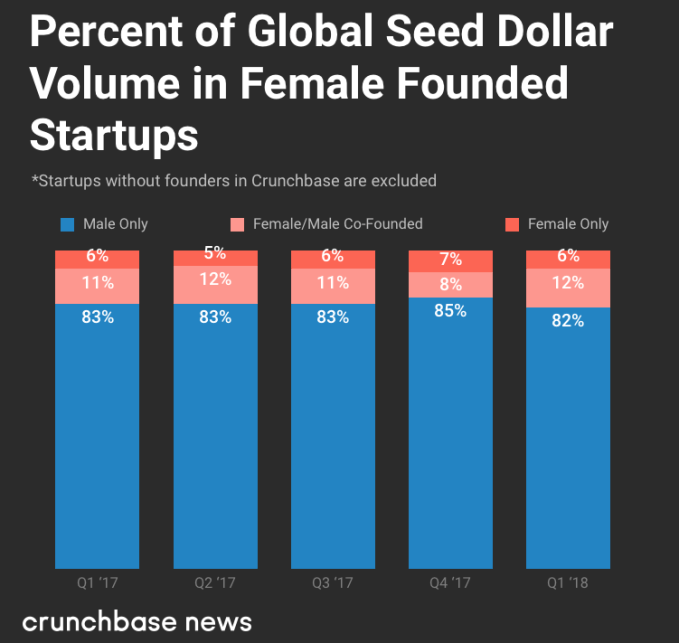 Returning to the big picture, seed deal counts are down slightly quarter over quarter. As more than 59 percent of seed deal volume is reported after the end of a specific quarter, the count of seed deals will increase from what is listed below: 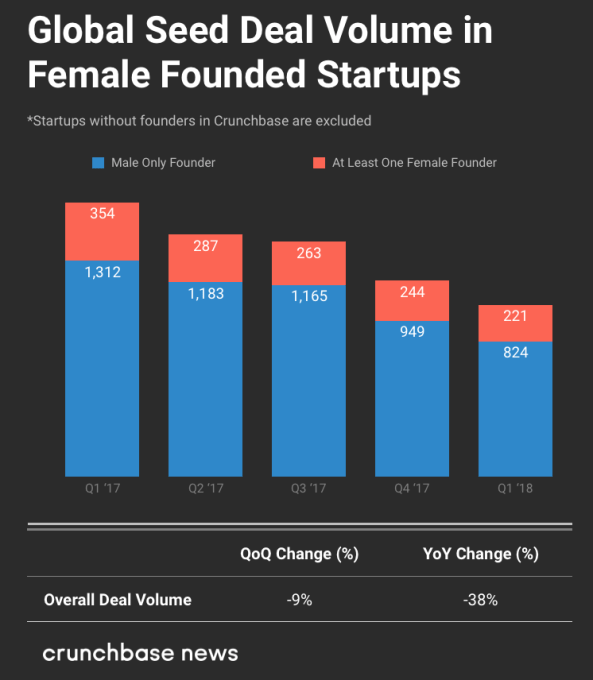 Again, we now want to know who was closing these deals with female founders.

Leading seed investors in companies with at least one female founder include Y Combinator with 28, SOSV with 10 and BBG Ventures and Innovation Works at five investments each. 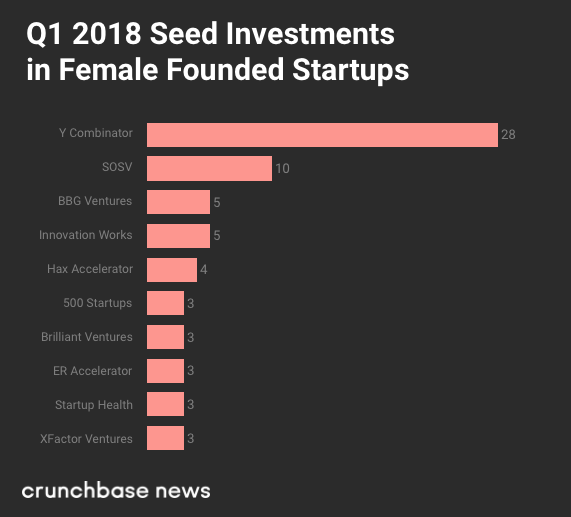 Kapor Capital, Backstage Capital, BBG Ventures, Broadway Angels, Pipeline Angels and more have been leading the charge to invest in diverse founders. With the increase in the number of female founders in the last five years, pressure has been growing on the broader venture capital community. With 74 percent of the top 100 firms with no female investing partners, bringing women and minorities both into their ranks and into their investment portfolios is a goal.

All Raise sets new goals for investing in diverse founders

AllRaise.org, which launched this past week, led by prominent female venture investors, seeks to impact these numbers. The organization has set the goal within the U.S. for the percent of female investing partners to double from 9 percent to 18 percent within 10 years or by 2028.

Why 10 years? For the venture industry that’s the typical life term of a single fund. Venture is a cottage industry with partners typically committing to stay for the lifetime of one or more funds. Therefore, turnover at the partner level tends to be much slower than other industries. With funds raising ever-larger amounts, and more often, expanding teams provides an opportunity to bring on diverse candidates. According to All Raise, the fastest growth for female partners is not with existing firms, but with new funds.

In the next five years, All Raise would like to see venture investments in female-founded companies move up from 15 percent to 25 percent. The organization is leading efforts to impact these numbers directly with Female Founder Office Hours supporting women who are seeking funding, to having tech founders and CEOs commit to increasing diversity in their team, board and investors.

Crunchbase is partnering with All Raise to keep abreast of these numbers within the U.S. market. For venture investments in female founders, we have a ways to go to get to 25 percent within the next five years. Reviewing the data over the last 10 years, 2015 is the first year that companies with at least one female founder have broken through the threshold of 10 percent of venture dollars. 2017 represents the best full year to date, at 14 percent of venture dollars.

The U.S. market mirrors this percent. We would need to see an average of two percentage growth points each year to reach this goal. With the number of female-founded companies growing slowly each year, these numbers are a stretch; however, it may still be attainable.