While chatbots might sound like an interesting experiment for restaurants and other small businesses, they probably can’t devote much time or money to building them. So a startup called Guestfriend is planning to make the process as fast and easy as possible.

The company has raised $5 million in seed funding from Primary Venture Partners, Techstars Ventures and betaworks. It’s led by Bo Peabody, a venture partner and entrepreneur in residence at Greycroft who also co-owns the Mezze Restaurant Group. Peabody compared the current moment to the year 2000, when “every small business woke up and said, ‘I need a website.'”

“That moment is coming for chatbots,” he predicted.

But rather than asking a restaurant owner or employee to go online and design the conversational flow of a chatbot themselves, Guestfriend can automatically create a chatbot based on information that’s already online — hours, menu, support for dietary restrictions and so on. In that sense, Peabody said, “It’s really just a website that you talk to.”

“The ah-ha moment was when I realized that building a bot for my restaurant was virtually impossible to do as a one-off, but all of the answers to almost any question are available online, mostly in structured APIs,” he said. 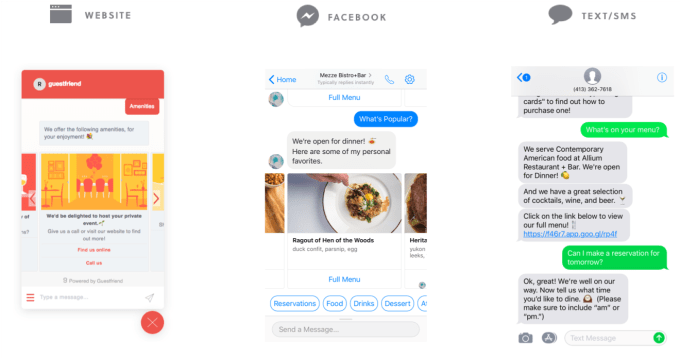 Peabody suggested that the real challenge was building natural language technology that could support the range of questions that someone might ask — for example, all the different ways that people might ask about the dress code. That’s one reason why it was important to target a specific industry, though he eventually plans to expand into home services, retail, spas/salons/exercise and hotels. (“It’s really the Yelp verticals.”)

Guestfriend chatbots work across platforms, including SMS, Facebook, Twitter and Google search results (via Google My Business), with plans to support speech platforms like Amazon Alexa and Google Home.

The company is actually building these chatbots without waiting for restaurants to sign up. (You can try them out on the Guestfriend website.) The idea is that publishers with restaurant listings can also incorporate them as a new way to interact with their sites.

At the same time, restaurants can come in and claim their chatbots, which will be updated accordingly everywhere that they’re available. The restaurant can then be as hands-on or as hands-off as they want.

I brought up the fact that I often visit restaurants’ Facebook Pages in the hopes of answering more timely questions, like whether or not a restaurant is staying open despite bad weather or a holiday. Peabody suggested that as with social media or a website, the up-to-dateness of the information will depend on the restaurant — some of them might want to update every day with things like daily specials. For others, a completely automated approach might be the most appealing.