It’s been about six years since Boosted first showed up with its electric longboard and its oh-so-orange wheels, but the company is back with the next logical step: a cheaper, shorter board.

The company is also revamping its longboards, with two new models on the way in the coming months.

First up, the shortboard(s). The company is planning on shipping two variations of its new shortboard: the $749 Boosted Mini S, and the $999 Mini X.

Both boards come in at 29.5″ long (versus the 38″ of their existing Dual+ longboard), with the primary differences being max distance and max speed: the Mini S caps out at 18 mph and can go up to seven miles, while the slightly heavier Mini X can go a tick faster and a whole lot farther, with a max speed of 20 mph and up to 14 miles of range.

These shortboards aren’t quite as fast as the longboards, but 18/20 mph on a (generally less forgiving) shortboard is still terrifyingly fast. As with the longboards, you can limit the speed with the handheld remote while you’re getting comfortable with it.

The shortboard’s deck is more concave than the company’s previous boards, giving you a better sense of where your feet are on the board at any given time. It’s got a nice fat kicktail to help with pivoting it around in tight spots, or to let you lift those front wheels over a crack in the sidewalk. The wheels are big (80mm) and soft, which should help you avoid having your day(/bones) ruined by that little pebble you didn’t see.

The Mini S weighs 15 lbs, while the X comes in at just shy of 17 — both definitely heavier than a standard skateboard, but light enough to pick up and carry when you get to your destination.

The Mini S should start shipping this month, with the Mini X shipping in June.

As noted above, the company is also overhauling its longboard lineup. It’s retiring the existing Dual+ line, replacing it with two long models: the $1,399 Boosted Plus and the $1,599 Boosted Stealth.

Both boards have a max range of 14 miles, making the last generation’s “extended range” battery (previously a $200 upgrade) the standard option. They both weigh roughly 17 lbs, and have big ol’ 85mm wheels.

The difference between the two? Boosted Plus tops out at 22 mph, while Stealth bumps the max speed up to 24 mph with a fifth riding mode built into the remote. It might not seem like a huge difference on paper, but two more mph feels like a whole lot when it’s happening to a piece of wood under your feet. The Stealth board also ghosts out the appearance a bit, with an all-grey deck and grey wheels instead of the signature orange.

Worth noting: The hardware across all the boards is now made by Boosted; they’re making their own wheels, building their own custom decks from a new, lighter poplar/fiberglass composite and CNC milling their own trucks out of aluminum for the sake of strength.

Boosted says the new longboards should ship by early June. 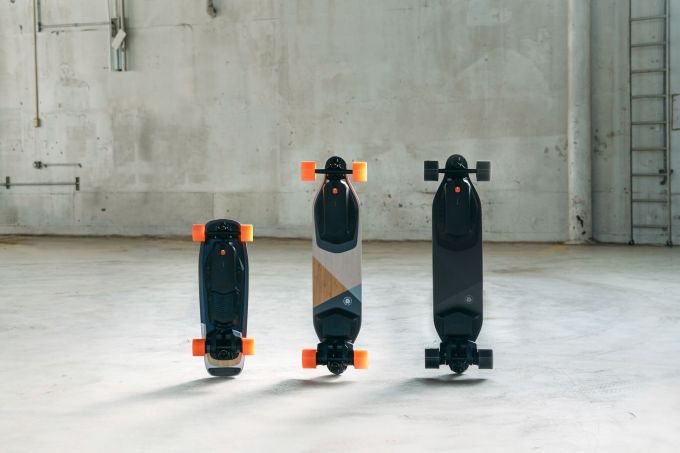