But while overall investment is on the rise, the U.S.’ share is dwindling. A few years ago, North American startups reliably received at least two-thirds of global early-stage investment. No more. For the past three quarters, North America’s share has dwindled to less than half, as the chart below illustrates: 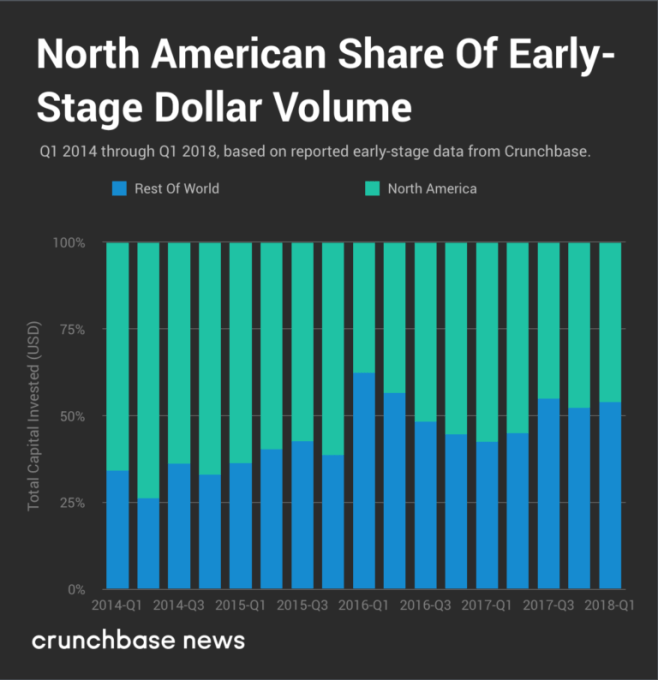 The rise of China’s startup scene, combined with local investors’ penchant for jumbo-sized Series A rounds, goes a long way to explaining the shift. Venture ecosystems in Southeast Asia, Brazil and elsewhere have also been in growth mode, and thus accounting for a more significant share of global early-stage investment.

Huge Series A rounds are huge in China

Before we venture further, it should be noted that although we associate Series A with early-stage companies, this is not always the case. Some of the largest Series A rounds globally have gone to companies that were relatively mature but previously bootstrapped or spun out of large corporations.

Recent data shows both the U.S. and China have their share of spin-outs and older companies gobbling up so-called early-stage rounds. OneConnect and Ping An Healthcare, subsidiaries of Chinese insurance giant Ping An, which raised $650 million and $1.2 billion, respectively, are examples of such activity.

Venture investors in China also put far more into Series A and B deals than U.S. counterparts. A Crunchbase News analysis found that the average Series A round for a China-based startup in 2017 was $32.8 million, just over triple the size of the average Series A for a U.S. company.

The momentum is holding up in 2018. So far this year, at least 12 Chinese companies have raised early-stage rounds of $100 million or more, altogether bringing in more than $4 billion (see list). Recipients of some of the largest rounds include:

U.S. is no slouch in big A and B rounds, either

The U.S. has also had a dozen startups (plus Pony.ai) bring in $100 million or more in early-stage rounds this year. However, the aggregate total these startups have raised — about $1.8 billion — is less than half that of Chinese counterparts.

As mentioned previously, many of the largest early-stage round recipients are mature companies or spin-outs of mature companies. The list includes two companies founded in 2009 that closed Series B rounds of around $100 million this year: Joby Aviation, a developer of electric planes, and Vacasa, a vacation property management company.

Healthcare spin-outs are also attracting big dollars, including Celularity, a developer of placental stem cell-based therapies, and Viela Bio, a developer of therapies for autoimmune diseases. 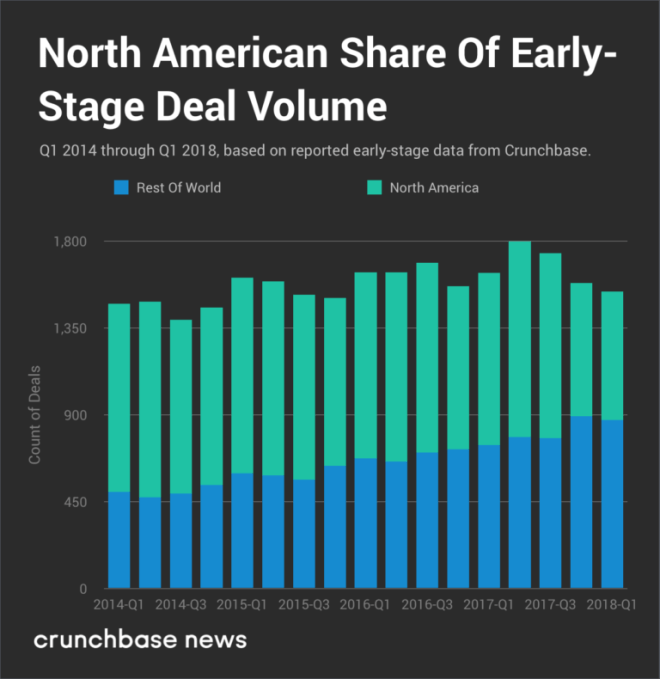 Part of the pattern is that the dynamics of early-stage funding have changed over the years. In the past, Series A and B rounds were for startups to develop working prototypes, hone market segments to target and attract the earliest customers. Scaling on a national or international level was generally for later stages, after a company had proven demand and a working product.

These days, markets move faster, and it’s not uncommon to see startups move in just a few quarters from concept to scaling en masse. Just look at Bird, the scooter sharing company that raised $115 million after mere months of operation with a business model intended to  provide a last-mile transit solution.

The entire bike, scooter and moped sharing sector has blossomed over a couple of short years, with big early-stage rounds all around. And it’s an area where China was the early leader for scaling. But fintech, biotech, agtech and other fields are also providing fertile ground for substantial early-stage funding rounds.

So is the declining share of North American early-stage funding a source of worry for founders and investors in the region? Or is it a predictable evolution following economic growth in China and elsewhere?

We won’t attempt to answer that here, but others have tried. Sequoia Capital’s Michael Moritz drew wide criticism earlier this year for an essay sounding the warning bell on what he perceived as superior work ethic among Chinese entrepreneurs compared to their U.S. counterparts.

Purely following the money, the takeaway is this: Investors globally have decided the early-stage opportunity is a lot bigger than they thought a couple of years ago. And while investors are putting a bit more into mature ecosystems like the U.S. and Silicon Valley, they are putting a lot more into China and other regions with underdeveloped venture markets relative to their size and technology prowess.