Word on the street is that in each of those exits, the founders took home ~30% to 40% of the proceeds. Which is not bad for ~ 4 /5 years of work. They can finally afford to buy two bedroom homes in Silicon Valley.

My math is not that good but looks like even some VCs made a decent return. Back of the envelope scribbles indicate that True Ventures scored an estimated ~44X multiple on its seed investment. Others like Bain snagged a ~10X on the A round investment and Venrock which led the Series B round took home ~6X.

We see a similar pattern with Phantom Cyber, which got acquired by Splunk for $350 million. A little bird told me that they had booking in the range of $10 million. But before we all get too self-congratulatory, lets ask – why did these companies sell at $300 million to $350 million when everyone in the valley wants to ride a unicorn? Clearly, funds like GV, Bain and Kleiner could have fueled more rounds to make unicorns out of Evident.io and Phantom Cyber.

Some of the board members might have peeked at the exit data gathered by the hardworking analysts at Momentum Cyber, a cybersecurity advisory firm. Look at security exit trends from 2010-2017. You might notice that ~68% of security exits were below $100 million. And as much as 85% of exits occur below $300 million.

Agreed that there are very few exceptional security CEO’s like Jay Chaudhry who grew up in a Himalayan village, and led ZScaler to an IPO. This was Jay’s fifth startup and he kept over 25.5% of the proceeds, with another 28.3% owned by his trust. TPG Growth owned less than 10%. After all, he himself funded a substantial part of the company (which raised a total of $110 million).  But not everyone is as driven, successful and it’s ok to sell if the exit numbers are meaningful. Remember what that bard of avon once said:

For I must tell you friendly in your ear,

Sell when you can; you are not for all markets. 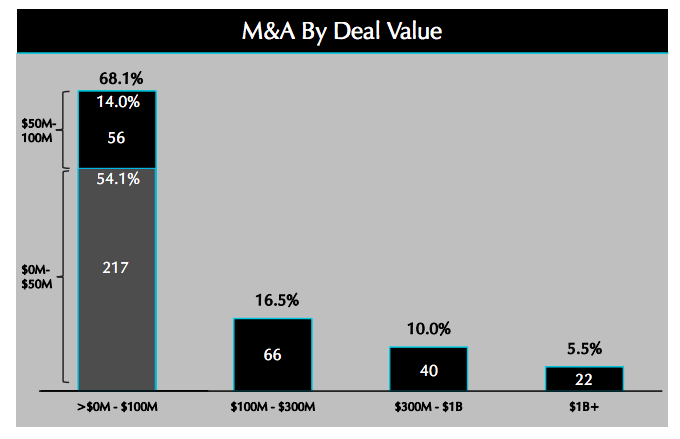 My friend Dino Boukouris, a director at Momentum Cyber, offers some sage advice to all founders who are smitten by unicorns. “Before a founder raises their next round, I would reflect on the market’s ability to purchase companies. The exit data says it all. As you raise more capital, your exit value goes up, timing gets stretched and the number of buyers who can afford you drops.” Dino has a point, you see. As we inflate valuations, your work, my dear CEO, becomes much harder.

If you don’t believe Dino, let’s look at another recent exit, PhishMe, which was acquired by a private equity consortium for $400 million. That’s a nice number, correct? At the first look, you’ll notice that the dilution and financial return patterns are similar to that of Phantom. Except that PhishMe took 7 years and consumed $58 million of capital, while Phantom took 3 years and consumed $22.7 million. Timing and capital efficiency matter as much as exit value. It’s not just the exit value ~ but how long and how much. Back to my man, Dino who will gently remind you that for the 175 M & A transactions in 2017, the median value was $68 milion. Read that last sentence again — very slowly. $68 million. Ouch!

Two years ago  in Cockroaches versus Unicorns – The Golden Age of Cybersecurity Startups cybersecurity founders were urged to avoid the unicorn hubris. A lot of bystanders, your ego included, will cheer you as you get higher valuations. But aren’t we all rational human beings, always making data based decisions?

Marc Andreessen will remind you that his best friend, Jim Barksdale, once said “If we have data, let’s look at data. If all we have are opinions, let’s go with mine.”   Since 2012, my VC friends have funded 1242 cybersecurity companies, investing a whopping $17.8bn. But chief information security officers say that they don’t need 1242 security products. One exhausted CISO told me they get fifteen to seventeen cold calls a day. They hide away from LinkedIn, being bombarded relentlessly.

Enrique Salem (former CEO of Symantec) and Noah Carr, both with Bain Capital are celebrating the successful sale of Evident.io. They pointed out that the founders — Tim Prendergast and Justin Lundy had lived the public cloud security problem in their previous lives at Adobe. “Such deep domain expertise allowed them to gain credibility in the market. It’s not easy to earn the trust of their customers. But given their strong engineering team, they were able to build an “easy to deploy” solution that could scale to customers with 1000s of AWS / Azure accounts. Customers were more willing to be reference-able, given this aligned relationship.” 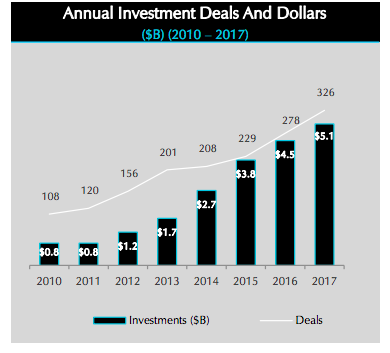 You, my dear CEO, should take a page from that playbook. Because Jake Flomenberg, Partner at Accel Partners says, “CISOs are suffering from indigestion. They are looking to rationalize toolsets and add very selectively. New layer X for new threat vector Y is an increasingly tough sell.” According to Cack Wilhelm Partner at Accomplice, “Security analysts have alert fatigue, and CISOs have vendor fatigue.”  You are one of those possibly, wouldn’t you agree?

Besides indigestion and fatigue, the CISO roles have become demanding. William Lin, Principal at Trident Capital Cyber, a $300m fund pointed out that “the role of CISO has bifurcated into managing risk akin to an auditor and at the same time, managing complex engineering and technology environments.”  So naturally, they are managing their time more cautiously and not looking forward to meeting one more startup.

Erik Bloch, Director of Security Products at SalesForce says that while he keeps an open mind and is willing to look at innovative startups, it takes him weeks to arrange calls with the right people, and months to scope a POC. And let’s not forget the mountain of paperworks and legal agreements. “It’s great to say you have a Fortune 100 as an early customer, but just be warned that it’ll be a long, hard road to get there, so plan appropriately” he pointed out.

So, my dear founder, as the road gets harder, funding slows down. Look at 2017 —  despite all those big hacks, Series A funding dropped by 25% in 2017. Clearly, many of our seed funded companies are not delivering those Fortune 100 POC milestones. And are unable to raise a Series A.  Weep, if we must, but let us remind ourselves that out point solutions are not that impressive to the CISOs.

All the founders I know are trying to raise a formulaic $8m Series A on $40m pre. But not every startup that wants 8 on 40 deserves it. Revenues and growth rate, those quaint metrics matter more than ever. And some investors look for the quality of your customers.  Aaron Jacobson of NEA, a multi-billion dollar venture fund says, ”A key value driver is a thought-leader CISO as a customer. This is often a good indicator of value creation.“

When markets get crowded and all startups sound the same, investors seek quality, or move to later stages.  They like to see well proven companies, that have solved a lot of basic problems. And eliminated riskier stumbling blocks. Like product-market fit, pricing and go-to-market issues. Naturally, the later stage valuations are rising faster. Money is chasing quality, growth and returns. 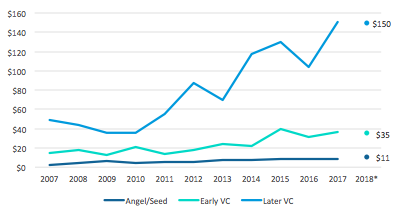 The security IPOs offer a sobering view. This is a long journey, not for the faint of heart. Okta moved fast, consumed ~4X more capital as compared to Sailpoint and delivered great returns.

In the near term,  the big challenge for you, dear security founder, is selling in an over crowded market. If I were you, I’d remember that innovation should not be restricted to merely technology, but can extend into sales and marketing. We lack creativity when it comes to marketing – ask Kelly Shortridge of Security ScoreCard. She should get some kind of BlackHat award for developing this godforsaken Infosec Startup Bingo. If you find any startup vendor that uses all these words, and wins this bingo, please DM me ~ I will promptly shave my head in shame. We got here because we do not possess simple marketing muscles. We copy each other while our customers roll their eyes when we pitch them. 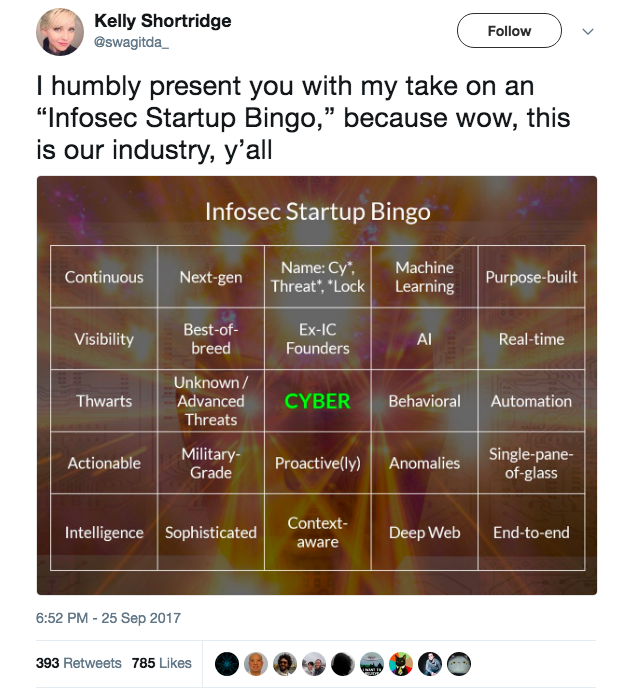 Sid Trivedi of Omidyar Technology Ventures wants to work with the developer focussed startups. He says, “Look at companies like Auth0. The sales efficiency on developer-focused platforms is tremendous. You can go to a CISO, CIO or CTO and point out that X number of developers are paying to use my technology. Here are their names, why don’t you talk to them? And then, let’s discuss an enterprise license for the full company?” That approach works like magic. Overwhelming majority of the software IPOs like Twilio, Mulesoft, SendGrid are developer platforms.”

If you go top-down in a hurry, you can crash and burn. I am aware of an impatient security vendor who used executive level pressure at a Fortune 50 company. They kicked their way into the POC. And got kicked out by the infosec team. The furios infosec team destroyed the vendor in a technical assessment. I was told that the product was functional but the vendor’s impatience and political gymnastics killed the deal. Let us not forget simple truth: many times CISOs turn to their subordinates for advice and decision-making, so don’t just sell to the top. Nor ignore the rest of the people in the room.

With more noise, the buyers freeze. Margins shrink. Revenues and growth slows down. Which means it’s harder to get to your milestones before your next round. Running out of cash is not fun. Nor is a down round, layoffs and such. So while this is easier said than done, please raise less and do more. And maybe, just maybe, you can keep 40% of a $350 million exit.

If you have questions or existential dilemmas, you can always find me, chatting with a friendly VC in South Park.  Or I’m always around in a trusted secure world of Signal.

PS: Let’s not forget to express our gratitude to those analysts at Momentum Cyber and Pitchbook for painstakingly tracking every investment, analyzing and presenting meaningful data. They help us look at the forest, and make our journey easier. Send them a thank-you tweet, some wine, chocolates, flowers or home-baked cookies.