Amazon’s Prime Wardrobe appears to be getting ready to launch. The retailer’s “try before you buy” shopping service, first announced in June 2017, aims to challenge incumbents in the market like Stitch Fix, Trunk Club, Wantable, and others. The service has quietly remained in an invite-only beta since last year, and Amazon claims that’s still the case. However, a recent flurry of tweets, including – ahem, those from an Amazon account and people who worked on the project – beg to differ.

Join Prime Student and try on your clothes before buying them with Prime Wardrobe! #PrimeStudentRep #Ad pic.twitter.com/yv1FyiQkcE

Unfortunately, the Amazon staffer’s tweet was deleted after we asked Amazon about it. It had read: “Amazon Prime Wardrobe is officially launched! Hooray! It’s been a fun project to work on.” Before we could screengrab the tweet, it was gone. But here it is in Chrome’s history, if you’re curious:

Amazon initially denied that anything had changed with regard to Prime Wardrobe, saying it was still in invite-only status. But when we shared the tweets, the spokesperson clarified That Amazon’s Fashion team has now extended the program to more Prime customers.

Customers can “shop from our great selection of brands for women, men, kids and baby,” the spokesperson said.

A number of Amazon Prime shoppers on Twitter do seem to realize they’ve just been let in:

Yeah. Just pick three grey market bits of clothing, in Korean sizes, all made from synthetic fibres that shrink / expand / fade after the first wash and…etc

Email from AMZN re “Prime Wardrobe”. Here is how it works:
1. Select 3 or more clothing items.
2. Try at home for 7 days
3. Return what you don’t want via included prepaid label
4. Free delivery and returns

Why would you ever go to a store?
The last straw for apparel retail. pic.twitter.com/l10wSBYutG

I just an invitation to Amazon Prime Wardrobe. Amazon stay coming for my bank account.

Amazon Prime Wardrobe may be the best thing ever.

Amazon Prime Wardrobe?? hmm might have to check that outhttps://t.co/Fd3J3aISzj

It was always a good idea then, but now… with Bezos money.https://t.co/v4u9PyJs7d pic.twitter.com/3PcaE1Db0R

Amazon declined to say how many people were testing it prior to now, or how many were added in this expanded test.

But Amazon surely can’t take much longer to roll out the program more broadly, given that it’s pushing a year since the original announcement. And during that time, Stitch Fix has IPO’d and Gwynnie Bee launched a subscription clothing box platform for other retailers, which has been adopted by Anne Taylor and New York & Company. It’s time for Amazon to step up, too.

Prime Wardrobe could be a strategic advantage for Amazon in the online apparel market as well as a means to boost Prime subscriptions. 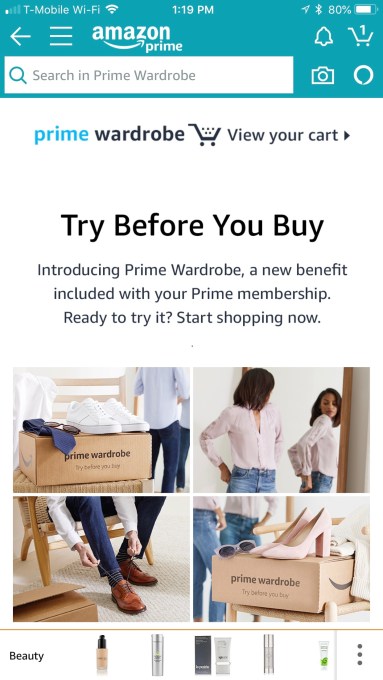 The service has been designed to solve one of online shopping’s biggest challenges in the apparel space – it’s hard to tell how something will fit – or if it looks good – from an online photo or video. Models don’t have the same proportions as most shoppers do, for starters, and clothing manufacturers all cut their sizes differently. Plus, you often don’t know – until something is on your body – how the fabric feels, if it hangs well, if it’s too tight or too loose in some spots, too short or long, or how it looks as part of an ensemble.

In the past, that’s led some people to avoid online shopping for apparel. Despite this, apparel is one of the fastest-growing categories online – that’s why Walmart bought ShoeBuy, Bonobos and ModCloth, for example.

Companies like Stitch Fix have addressed the challenges with buying apparel online by sending shoppers a curated selection of clothing and other accessories which consumers can try on at home, then keep or return using an enclosed prepaid shipping bag.

Prime Wardrobe skips the individualized styling service – which frankly, hasn’t been that great at Stitch Fix, in my experience after over a year using the service. Stylists blatantly ignored requests, and the service never seems to adapt that well based on buying behavior. The “personalization” may exist, but it feels like smoke and mirrors. In reality, most of Stitch Fix’s clothing is on-trend or classic, so generally inoffensive to most shoppers. It sells. But really, the ease of home try-on and returns is what’s best. These aspects are Prime Wardrobe’s focus, too. 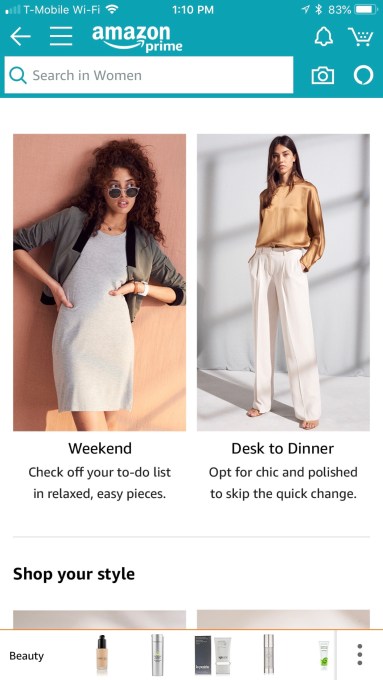 To use Prime Wardrobe, Prime members shop a dedicated selection of items on Amazon’s site, where they’ve been organized into high-level categories like Women, Men, Girls, Boys, and Baby.

From each section, items are further organized by style (trendy, romantic, sporty, casual, etc.), occassion (work, weekend, etc.), and more. There are also featured selections like the “Editor’s Top Picks,” and seasonal collections like “That Perfect Spring Dress,” along with “New Arrivals,” “Brands We Love,” and other grouping that make it easier to find things you may like. 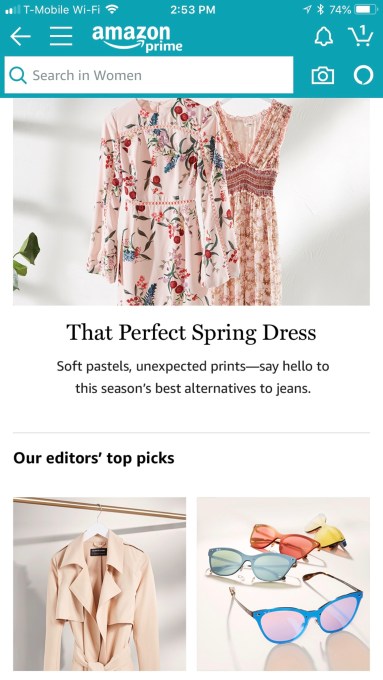 As far as I can tell after a bit of poking around, Amazon doesn’t heavily favor its own private labels in Prime Wardrobe’s collections. Its own labels are simply mixed in with other well-known brands, like Tommy Hilfiger, Adias, Guess, Levi’s, Calvin Klein, Nine West and many others.

You have to choose at least 3 items before you can ship yourself a box of clothing, shoes and accessories, then can try items on at home for 7 days before you’re charged. The box holds 8 items max.

A prepaid UPS label is included, so you can return items you decide not to keep. A promotion is currently offering $20 off when you buy $200 or more, which takes the place of the $20 “styling fee” Stitch Fix charges that’s then credited back when you buy from your box.

Although Prime Wardrobe is only for Prime members, items don’t ship in 2 days like Prime. Because boxes include multiple pieces, they may take four to six days to ship.

While Prime Wardrobe is now available to more people, Amazon didn’t say when the service will launch publicly.

Do you have Prime Wardrobe? Share your thoughts with me at sarahp@techcrunch.com.