Landing pages might not sound like the most exciting problem for a startup to tackle, but Tyson Quick, founder and CEO of Instapage, said that they’re a real issue for marketers.

Quick was previously working on a marketing product called Jounce, where he was frustrated by the fact that even after someone had clicked on a Jounce ad and ended up on the company’s website, only 3 percent of them were converting.

“It was kind of ridiculous, since they’d already engaged with the ad,” Quick said. So just by creating a few personalized landing pages that targeted “major” customer segments, Jounce was able to increase conversions to around 20 percent.

In 2012, Quick decided to switch the company’s focus to Instapage, and it now offers a broader platform for creating and testing different landing pages that are personalized for different visitors.

“We can be this middleware between ad tech and traditional marketing and sales tech,” Quick said. “All this technology has made it so the ad-buying side has sophisticated targeting and relevancy. And once you capture a lead, you’ve got marketing automation that pushes them into your CRM. It’s the point of conversion that’s missing.”

Instapage now has more than 15,000 customers who are seeing average conversion rates above 22 percent. And it’s announcing that it’s raised $15 million in Series A funding from Morgan Stanley Expansion Capital. 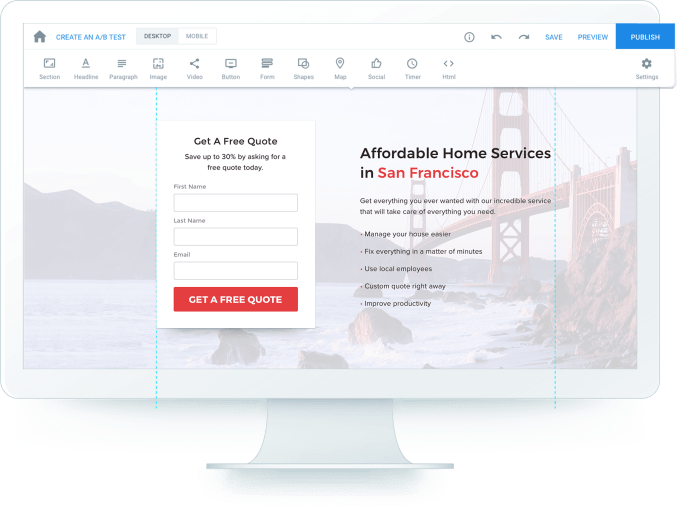 Quick admitted that it hasn’t just been a straight line to success. He recalled moving from Salt Lake City to San Francisco and living in his car for part of the month so that he could rent out his apartment on Airbnb.

“I didn’t want to get a job,” he explained — and the Airbnb money helped him devote his time to Instapage.

Quick also said it took some time to find the ideal customers, namely larger companies that are always running digital advertising campaigns. The strategy seems to have worked, with Instapage not losing a single enterprise customer in the past year.

Quick also sees a broader opportunity around what he calls “post-click optimization,” which he said has three key components — scalable creation, optimization and personalization. (That last category is what his team is focused on building out now.) And while other companies like Optimizely might tackle some of those segments, he said Instapage is leading the way in combining all three.

I wondered whether GDPR or other shifts in the landscape around online data and privacy could affect Instapage’s business, but Quick argued that the company doesn’t need detailed user data to be helpful: “The personalization comes from the advertising itself. We can glean insights from what ads did they engage with.”

As for raising money, Instapage had already raised $2 million in seed funding. Quick said that when he started to have conversations about a Series A, most VCs weren’t interested in giving the company “the valuation we felt we deserved.” (He speculated that they were “a little preoccupied by the buzzy things that were going on” like cryptocurrency and on-demand delivery.) And the company was profitable, with what Quick said is $12 million in annual recurring revenue, so it didn’t need to raise the funding.

However, he found that Morgan Stanley was more willing to dig in and learn about Instapage’s business.

“Instapage has a clear vision for improving digital marketing efficiency and has built an impressive product for marketers to create more successful advertising campaigns without the need for external or technical resources,” said Pete Chung, the head of Morgan Stanley Expansion Capital, in the funding announcement. “We’re confident that this next phase of growth will further establish Instapage as the authority on converting ad clicks and optimizing conversions, and we look forward to working with Instapage to bring post-click optimization to a larger audience.”