Fleetsmith, a startup that wants to make it easier for companies to manage their Apple devices, announced a $7.7 million Series A round today led by Upfront Ventures.

Seed investors Index Ventures and Harrison Metal also participated in the round. The company has raised a total of $11 million. They also announced that Luke Kanies, founder and former CEO of Puppet has joined their advisory board.

Fleetsmith wants to help SMBs provision and manage Apple devices whether that’s computers, phones, iPads or Apple TVs. Trying to provision these devices manually is a time-consuming process, one that larger organizations no longer have to deal with because of other commercial options or in-house solutions, but Fleetsmith puts that same kind of efficient device management within reach of smaller organizations by offering it as a cloud service.

Two of the co-founders, Zack Blum and Jesse Endahl, who came from Dropbox and Fandom, were both in positions where they needed to buy and deploy Apple devices and couldn’t find a good way for a small company to do that on the market.

“How do you manage a fleet of Macs and secure them through the internet? We looked around when we were in a build/buy position and saw a lot to be done. We are democratizing what companies like Google and Facebook have with their own [home-grown] internal Mac management tools,” CEO Blum told TechCrunch. 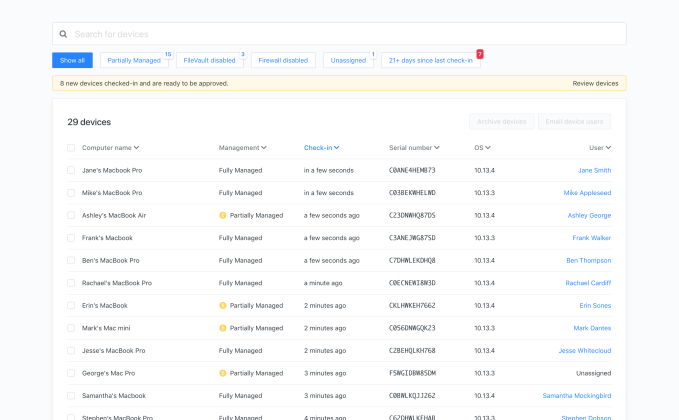 The company takes advantage of the Device Enrollment Program, a business device management service offered by Apple to simplify provisioning of Apple products. As long as the IT administrator is enrolled in DEP, you can use Fleetsmith for zero touch deployment, Blum explained. An employee can then order a laptop (or any device), and when they connect to WiFi, it connects to Fleetsmith, which configures the device automatically.

“The really cool thing about how DEP integrates into our feature set is that as soon as the employee connects to WiFi, it take care of deployment. The account is created, software gets installed, the drive gets encrypted. It makes installing and enrolling new people really simple,” he said. Once you’re setup with everything you need installed, the admin can force critical updates, but the system will give you several warnings before installing the update.

“Fleetsmith is automation applied perfectly, handing all of the menial work to the computer so the people do less firefighting and more strategic work. This is especially important in the mid-market because the teams are leaner and every computer counts,” new advisory board member Kanies said in a statement.

The service costs is just $99 per year per device to access the cloud service. They offer a freemium version to manage up to 10 devices at no cost. The company launched in 2016 and currently has 20 employees. Customers include HackerOne, Robinhood and Nuna.