Facebook has become the de facto way people today keep up with their friends and family and, at times, their wider network of professional acquaintances and colleagues. But its inattention to user data protection is leading some people looking for an out. A new app called Garden, officially launching today, wants to offer people a more private and personal way to keep up with those who are important to them.

The app was created by Zander Adell, previously the CEO of the package delivery startup Doorman, which shut down last fall. Doorman had tried to solve the problem with last mile delivery by allowing people to schedule when their online orders were actually delivered. The business had taken a lot of work, as many startups do. And that distracted Adell from maintaining his other relationships.

“I built Garden because I lost a friend,” he says. “I got so busy running my last startup that I neglected some of my closest personal relationships with the assumption that we’d connect when life calmed down. Years went by and life never got any easier,” Adell admits. 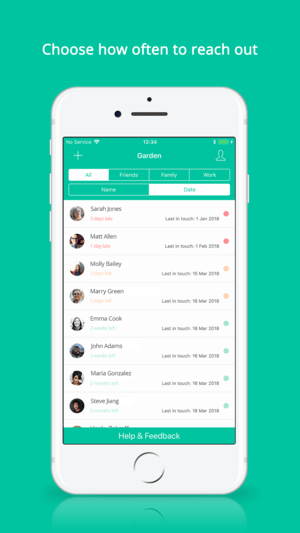 He also believes that social media has tricked users into thinking they have stronger relationships with others than they really do – that “liking” a post is some sort of meaningful experience, for example, when it’s actually not.

“Maintaining a real personal or business relationship that adds value and meaning to your life takes regular and substantive effort,” Adell explains. “Just like you can’t expect the plants in a garden to stay healthy without regularly watering them, you shouldn’t expect your relationships to thrive without putting in the time.”

Garden initially grew out of Adell’s own efforts in better tending to his relationships which took the form of a big spreadsheet where he wrote down when he last caught up with someone. He found it helped him better keep up with both his business contacts and his personal relationships.

When he heard from others who had also built their own spreadsheets for a similar purpose, he thought it may make sense to offer the solution as an app instead.

With Garden, you set a reminder frequency on your contacts in your phone, and indicate how often you want to keep up with the person in question – weekly, monthly, quarterly, every six months, etc. When you do catch up with a friend, you can leave notes in the app and write details about your last conversation. In effect, it’s a personal CRM.

Of course, CRM-in-an-app has been done before, but the focus is almost always on business relationships – not personal ones. Garden could effectively manage both.

The app also plays in the same space as all those Address Book replacement apps once did, few of which have lasted. For example, Tinder bought Humin, Brewster’s team joined RBI, and Cobook sold to FullContact.

But perhaps now people will give new apps that help them maintain their relationships another look.

Garden is well-designed if fairly simple – it’s a contact manager with push notifications. The hard work of actually keeping up will have to be done by you – you can’t just like a few posts and call it day. But this may be what some people want right now as they wean themselves off Facebook.

Given that Garden is a database of your personal relationships, Adell says that data privacy is critical. The data itself is hosted with AWS in the cloud, and transferred securely, he says. It will also not spam your friends as many apps in the past have done, Adell promises.

That said, contacts apps have gotten themselves into trouble before – bugs exposed private information, and people have always been a bit uncomfortable in granting apps permission to their private contacts. Garden, like others, asks for access to your Contacts to do its work. And that will give some people pause.

Adell says the project is something he bootstrapped himself, but is his full-time focus for the time being.

The app is currently a free download on iOS, but may become ad-supported at a later date.