Sarah Lacy, founder of media site Pando, has unveiled her newest company, Chairman Mom. The subscription-based startup aims to provide resources to working mothers, and ultimately set them up to succeed in all areas of their lives.

“One of the things that’s actually pretty distinct for us is we focus really on the woman, not the children,” Lacy told TechCrunch. “There’s a lot of sites where you can get a lot of answers of what’s a great pre-school or where’s a restaurant that is kid-friendly. and a lot of things are always very kid-centric. We’re really woman centric.”

At launch, Chairman Mom is focused on one key functionality: a question and answer platform. Every day, Chairman Mom’s team of three curates two questions — one about life and one about work — from the community to feature on the site for answers and discussion. These questions can range from “How much do you get paid?” to “What’s the best way to handle harassment at work?” to “What should I do if I think my spouse is cheating on me?” 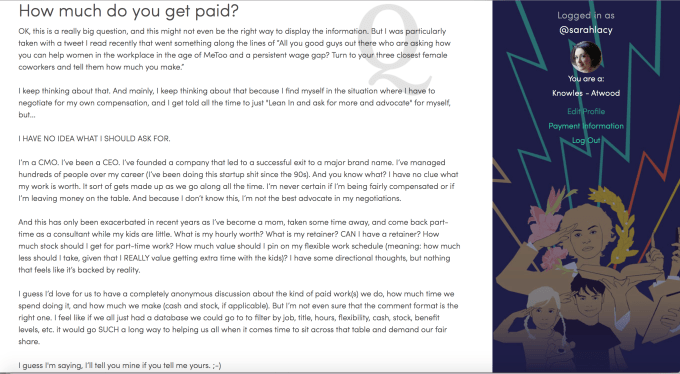 “The goal of each thread is to get that mom the best answer,” Lacy said. “It’s really not to have an open discussion board of everyone’s views on that topic.”

What makes Chairman Mom different from the likes of other social media sites is its emphasis on using real names while also offering anonymity. Real names are required to sign up but community members can ask and respond to questions anonymously. There is also no up-voting or direct messaging.

“We don’t have things that have created tribalism and fights on other mom networks,” Lacy said.

“I was shocked at the disconnect between that and what happened when I actually had kids,” Lacy said. What happened when I had kids was I became better at everything. I became more ambitious, I wrote more quickly, I was so much better as a manager. I was so much more productive. You really have this amazing ability to prioritize what’s important.” 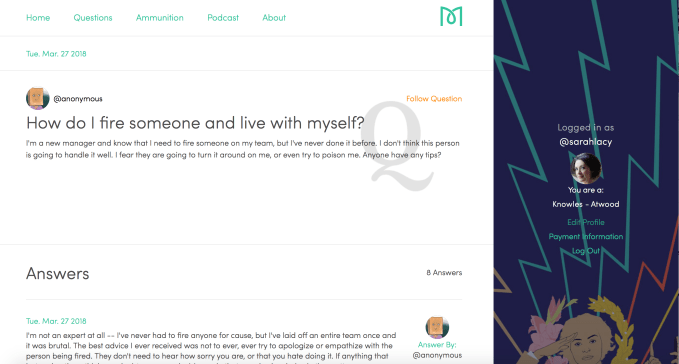 Lacy went with the name Chairman Mom to “telegraph in charge and maternal,” she said. It was important to her, she said, for the name not to conjure up any connotations of shame around pregnancy and motherhood.

“It’s even a step beyond ‘I’m not ashamed,’ but like ‘No, this is our source of power,'” she said. “Something that just sounds so declaratively in charge but also maternal. And it’s still called the chairman of the board. And it’s this idea of we’re overthrowing a patriarchy. This is a man’s world that we’re overthrowing and we don’t have any illusion about that fact.”

Chairman Mom costs $5 per month for access to its community of honest answers to questions about working motherhood. By having people pay to access the platform, one hope is that trolls won’t pay actual money to troll, Lacy said. The platform is also free of advertisers and intends to remain that way, Lacy said.

Chairman Mom is not the only startup targeting mothers. There’s Peanut, which is a Tinder-like experience for finding other moms to hang out. There’s also Winnie, which helps parents find kid-friendly places and access other resources that may be helpful to parents.

Lacy said she recognizes Chairman Mom has competitors, but also recognizes that “it’s such a massive market no one’s building for,” she said. It’s so massive, Lacy said, that she envisions seeing “a handful of billion-dollar consumer internet companies that are geared toward women.

Chairman Mom has been in private beta for the last month or so, with “several hundred” people using it. Chairman Mom has raised a $1.4 million seed round led by Ann Miura-Ko of Floodgate Ventures and Tim Connors from PivotNorth Capital, with participation from Greylock Discovery and Precursor Ventures.