It’s become a common complaint that social media allows everyone to limit their news consumption to stories that reinforce what they already believe. But the team at Knowhere says it’s found a solution: News stories written by machines.

The idea is that Knowhere’s technology can eliminate some of the in-built human bias, and also pull from a wide variety of sources and write stories with enormous speed. For controversial and political news, it doesn’t limit itself to one story. Instead, it allows you to jump between versions of the story that are written from a left, right or “impartial” perspective.

“I want to establish a source of record that’s indisputably trustworthy for everyone from across all aisles,” said CEO and Editor-in-Chief Nathaniel Barling. “As a Knowhere reader what you are signing up for is the truth and the full context around it.”

At first, I wondered whether Knowhere might simply deepen the same divisions that it claims to fight. Might this approach just reinforce the idea that every piece of news should be interpreted according to our ideological leanings? Or that we can dismiss an accurate piece of reporting by, say, The New York Times because The Times has been painted as a liberal paper?

When I brought this up, Barling said Knowhere is focused on facts, even if those facts (say, the scientific consensus around climate change) are sometimes disputed for political reasons. 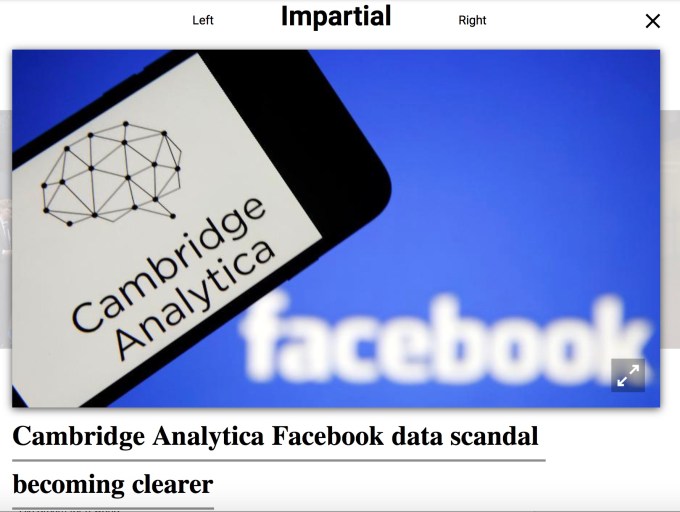 Barling’s father Kurt was a longtime reporter at the BBC, and Barling recalled a conversation between the two of them on this topic: “The truth doesn’t care for your politics. What we must do is evaluate all of the evidence that we possibly have available to us, then come to the most accurate conclusion regardless of political stripe.”

So the Knowhere stories that I’ve read tend to be very straightforward and focus on facts that have been corroborated by reputable publications. The left-leaning version of the article might be written so those facts add up to one narrative, while the right-leaning version might tell a different story, but they still agree on the core facts. (And some stories — including most of the ones I read in the Technology section — don’t include multiple spins, just the impartial version.)

And while Knowhere articles are created by machine learning technology (Barling’s co-founders Alexandre Elkrief and Dylan Rhodes are both data scientists), they’re all reviewed by human journalists. In fact, he said there are already eight journalists on his team, making up for half of Knowhere’s headcount — a ratio that he hopes to maintain as the company grows.

Facebook has also been making efforts to show different perspectives on a story, particularly if the story’s accuracy is disputed. When I pointed this out, Barling said, “They do recognize the scale of the issue, but they’re not well-placed to execute on it because of their philosophical stand. As you said, they don’t want to be the arbiters of truth.”

In addition to launching today, Knowhere announced that it has raised $1.8 million in seed funding from investors, including CrunchFund, Danhua Capital, Day One Ventures, Struck Capital and Abstract Ventures. (Like TechCrunch, CrunchFund was founded by Michael Arrington, and it’s backed by our parent company, Oath.)

And while it’s way too early to declare that Knowhere is succeeding at breaking down partisan bias, I’ll say that I’m pretty left-leaning myself and that I get a lot of my news and commentary from left-leaning sources — but the site’s approach and tone made me way more willing to click on the right-wing version of the story.