The App Store shrank for the first time in 2017, according to a new report from Appfigures. The report found the App Store lost 5 percent of its total apps over the course of the year, dropping from 2.2 million published iOS apps in the beginning of the year to 2.1 million by year-end.

Appfigures speculated the changes had to do with a combination of factors, including stricter enforcement of Apple’s review guidelines, along with a technical change requiring app developers to update their apps to the 64-bit architecture. 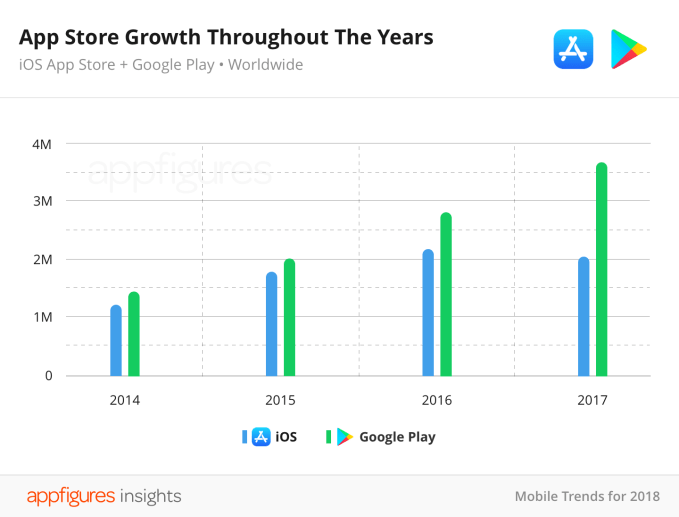 Apple had also promised back in 2016 that it would clean up its iOS App Store by removing outdated, abandoned apps, including those that no longer met current guidelines or didn’t function as intended. That cleanup may have well stretched into 2017, as app store intelligence firms only started seeing the effects in late 2016. For example, there was a spike in app removals back in October 2016.

Then in 2017, Apple went after clones and spam apps on the App Store. Combined with those apps that weren’t 64-bit compatible and those that hadn’t been downloaded in years, the removals reached into the hundreds of thousands over a 12-month period. Apple later went after template-based apps, too, before dialing back its policies over concerns it was impacting small businesses’ ability to compete on the App Store.

To see the App Store shrink, given these clear-outs, isn’t necessarily surprising. However, Appfigures found that removals of existing apps weren’t the only cause. iOS developers weren’t releasing as many apps as they had during the growth years, it also claims.

But this doesn’t necessarily mean developers weren’t creating as many iOS apps — it could mean that Apple’s review team has gotten tougher about how many apps it allows in. Thanks to the spam and clone app crackdown, fewer apps of questionable quality are being approved these days. 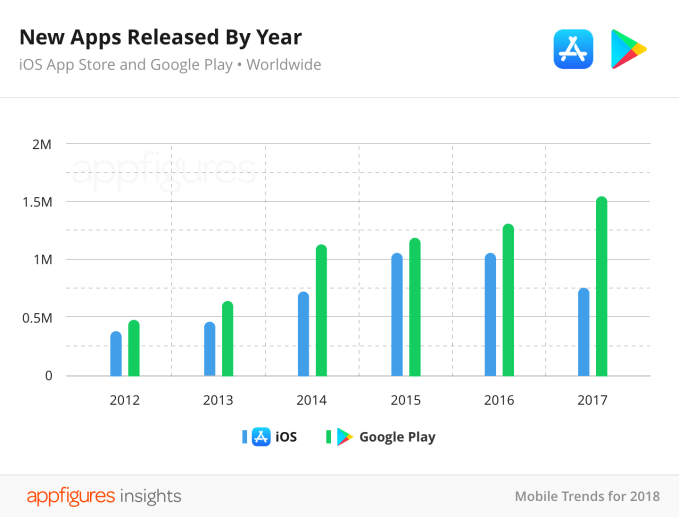 In addition, some portion of the new Android app releases during the year were iOS apps being ported to the Google Play platform. More than twice as many apps came to Android in 2017 than Android apps coming to iOS, the report said.

The full report also developed into the numbers of cross-platform apps (450,000 are on both stores), the most popular non-native tools (Cordova and Unity), the rise in native development, the countries shipping the most apps (U.S. followed by China) and the Play Store’s growth.

It can be viewed here.