Streaming royalties are too expensive for Spotify to thrive as a public company just playing us songs. Spotify’s shares closed down 10 percent today during its NYSE trading debut. Luckily it controls much of the relationship between musicians and their fans on its app, poising it to build a powerful revenue and artist loyalty generator by connecting the two through native advertising and messaging that doesn’t stop the music.

Spotify already has a wide range of ad experiences built for traditional brands, from audio ads to display units to sponsored sessions where users get ad-free playback in exchange for watching a commercial. But none of these ad units are designed to help musicians grow their audience within Spotify, even if they can be bent to that purpose.

Back in 2007, Facebook already had ads that led offsite. Think of these as Spotify’s existing audio and display ads. But when Facebook built Pages that let businesses reach you through the News Feed, it also launched ads that let them promote and grow their Pages within Facebook. Unlike the stock banner ads you see all over the web, these ads were native to Facebook, targeted with its profile data, and they used social referrals about Pages your friends interacted with to rope you in. These gave entities on Facebook a paid way to grow their popularity inside the platform.

This is Spotify’s opportunity. 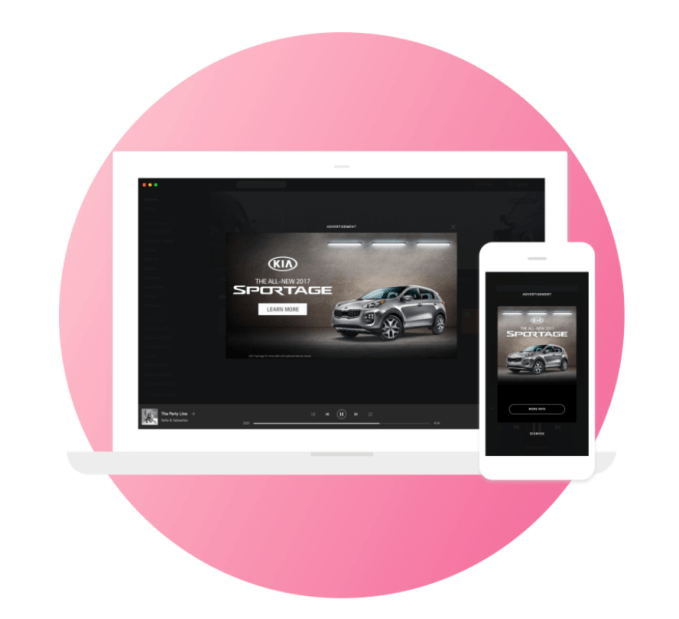 Spotify’s existing ad units are designed for brands, not musicians

A few years ago, Spotify’s user base was too small for artists to focus on spending money there to get popular. But Spotify has grown to the size where it’s replacing top 40 radio, and over 30 percent of listening now comes from its recommendations and algorithmic playlists like Discover Weekly. The record labels now need Spotify to have a hit. Between that influence and it’s stature as the biggest on-demand music streaming service, Spotify has the leverage to offer artists the best tool to boost their fan base. Whether artists want to build a following on Spotify, sell collectors’ items, or fill premium front-row seats at their shows, Spotify could hook them up.

The no-longer-a-startup has already built the groundwork for this with the launch of its Spotify For Artists analytics dashboard app last year that shows a musician’s top songs, and the demographics of their fans including their location, gender, age, and what else they listen to. Spotify’s proven the power of this data with its Fans First email campaigns that let artists reach their most frequent listeners with access to concert ticket pre-sales and exclusive merchandise. It claims the emails see a 40 percent open rate, and 17 percent click-through rate — way higher than the industry standard. 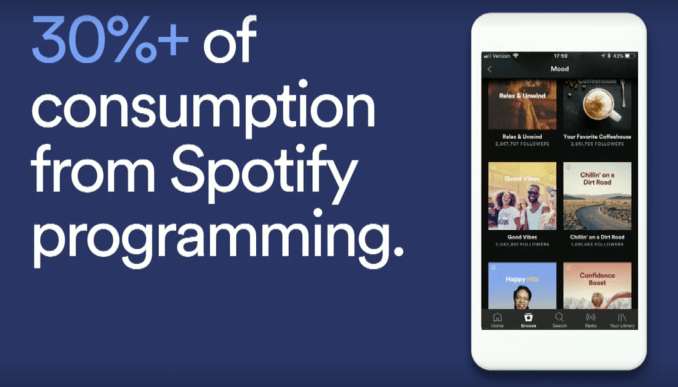 But if Spotify built new surfaces for artists to reach out directly to fans within its apps, it could become the destination for record label marketing money. Since these artist ads and messages would all drive users deeper into the app rather than away from it like brand ads, Spotify could charge less than traditional ads and make them affordable to labels on a budget or musicians paying out-of-pocket.

Sponsored songs on its algorithmic playlists could expose fans to artists in the most natural way possible, or turn one-time listeners into loyalists. Wherever there’s recommendations, there’s room for paid discovery. Listeners could easily skip the track or switch to a different playlist, but might end up falling in love with the band, and diving into their catalogue. It’s the equivalent of Facebook’s in-News Feed native ads, but with a musician promoted instead of a business’ Page. Spotify was actually spotted testing what was effectively a sponsored song in mid-2017 above the start of some playlists. While there was an opt-out option within the app’s Settings that’s since disappeared, Spotify has at least considered this idea. 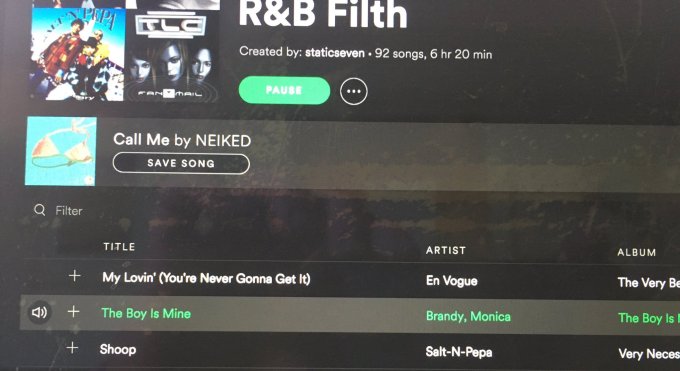 Promoted Artists could use a similar model to Google’s AdWords sponsored search results. When users search for an artist, they could be shown similar artists who’ve paid to be promoted in the search typeahead or results page. Spotify could also insert a box within the profile of another artist you’re browsing below their top tracks. Spotify already lists a slew of related artists in text, but could highlight one that pays, perhaps showing one of their songs that could be instantly played. 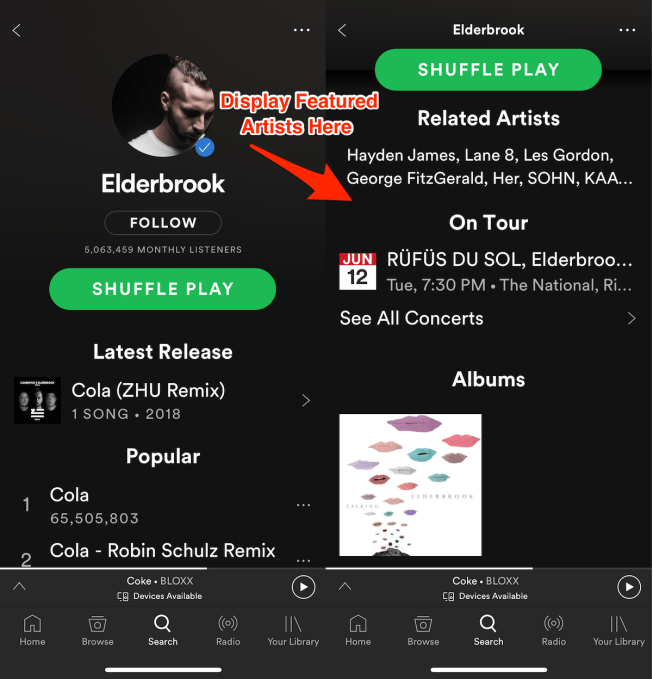 Featured Artists could give artists that pay a special slot on Spotify’s browse page. With so many recommendations here, it’d be easy to insert a sponsored section without feeling interruptive. 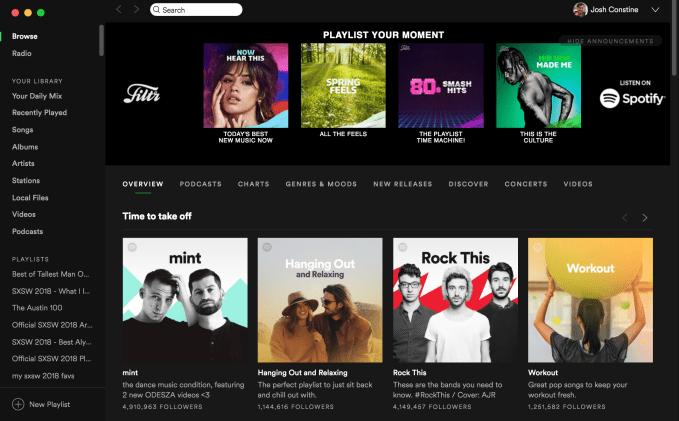 Sponsored Visualizations could make better use of your screen while you listen. Rather than just staring at the album art and playback controls, Spotify could let artists pitch fans their other music, tickets, gear, or social media channels. Spotify could also fill this space with entertaining silent video clips, photo slideshows, and biographical info as I suggested as a differentiator in 2016, and similar to how lyrics site Genius started doing with its Stories this week. Given users are currently listening to the artist, they might be primed for these experiences. Spotify has already tested letting artists show GIFs during playback, and has partnered with Genius to show Behind The Music factoids, but this is real estate that could help artists earn more money as well as entertain fans. 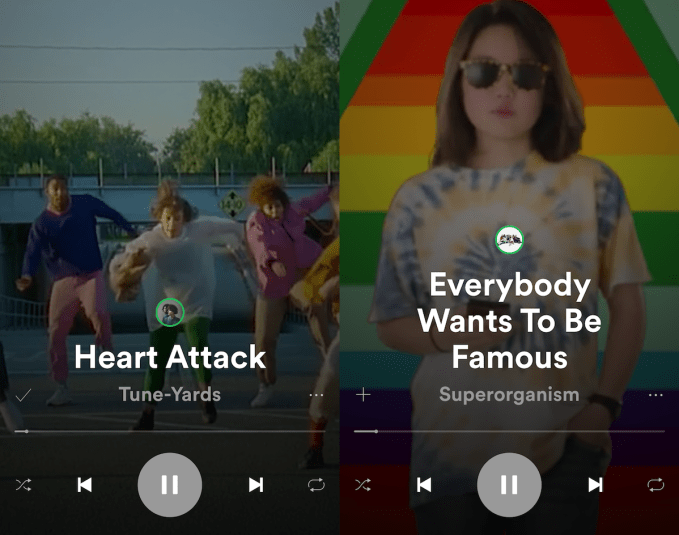 The most ambitious and audacious way to let artists reach fans would be a special artist-to-fan messaging channel. Spotify got rid of its in-app inbox and messaging feature for sending friends songs a few years ago, instead pushing users to share music via their chat app of choice. But similar to the Fans First email campaigns, Spotify could create a special artist-to-fan messaging section in its app that could alert users to new releases and playlists as brand advertising, or even push tours and merchandise as more direct performance advertising. 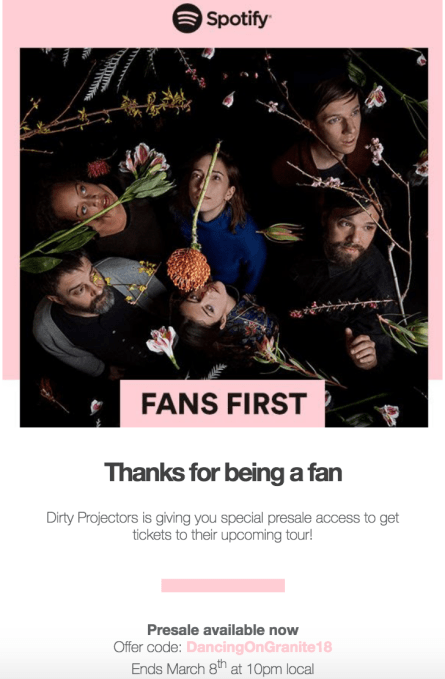 Spotify could give all artists a certain volume of messages they could send for free or let them reach out just to the top 1% of fans a certain number of times per month or year. Then artists could pay to send more messages beyond the limits. Alternatively, it could just charge for any use of messaging.

Done wrong, the above options could feel like Spotify gouging artists to reach their own fans. But done right, users might actually enjoy it. These connections wouldn’t be too far off from following an artist on other social media, but where people are already listening. Finding out about one of your favorite band’s new albums, tours, or t-shirts might feel less like an ad and more like an inside tip from the fan club.

Spotify might be able to get away with showing some of these different experiences to users who’ve subscribed if they don’t get in the way of music listening. Swinging to the other end of the opportunity spectrum, the company could just give away all these experiences to artists, boosting their loyalty to Spotify and getting them to promote their presence there instead of on competing streaming services like Apple Music.

If Spotify doesn’t figure out a way to improve its margins with additional revenue drivers, it may have a tough time surviving as a public company. If it becomes too profitable from just music streaming, the labels can always try to increase their royalty rates. Spotify might hope that more artists work with it directly, cutting out the middlemen, but the record labels still provide some important marketing, radio promotion, and distribution services that artists need. Meanwhile, startups including United Masters (which raised a $70 million Series A from Google parent Alphabet and Andreessen Horowitz) adnd subscription crowdfunding platforms like Patreon want to usurp the record labels and become the way artists earn more before Spotify can.

This New York Times’ chart shows why musicians feel screwed, even though it’s labels keeping their money not Spotify

Creating ways to connect with listeners could offer Spotify a way to combat the enduring narrative that it’s screwing over musicians. If Spotify can prove these artist-to-fan messaging options earn them more than they cost, it could be seen as the streaming service that’s actually trying to help musicians make a living.

Recorded music has become primarily a promotional tool for all of a musician’s other revenue monetization methods since the dawn of the MP3. Streaming’s on-demand structure and no-extra-cost-per-play nature turns the curious listener who’s only heard of an artist or just likes one single into a diehard fan who shells out the big bucks every time their favorite act is in town.

As we shift to an experiential culture where our possessions are digitized and its our interests that define us, people want to feel closer to the creators they love. Artist-to-fan messaging could bring the whole life-cycle from discovery to affinity to real monetization beyond the royalties all within one green and black app.

For more on Spotify going public, read our feature stories: