Genius, the big database of song lyrics and musical knowledge, is today launching its own version of “stories,” the Snapchat and Instagram-like short form sharing format that’s been rapidly spreading to a number of sites and apps, including Facebook, Messenger, Skype, and even Google. Genius’ “Song Stories,” as the new product is called, combine Genius artist interviews with YouTube content like concert footage, music video clips, and playlists.

As the user moves through the story, they’ll see the sort of behind-the-music details that Genius is known for, but in a more interactive format.

If you’re already familiar with Instagram Stories or Snapchat Stories, you’ll find Song Stories easy to use as well. 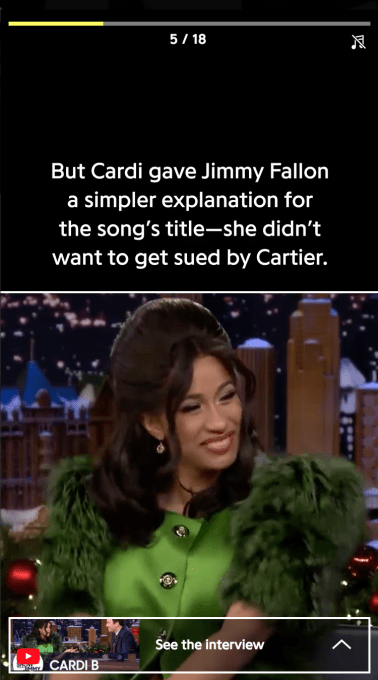 As you listen to the song, you can tap to advance through the cards in the Story, tap and hold to pause a card, or do nothing and watch the story advance automatically, appropriately synced with the music. 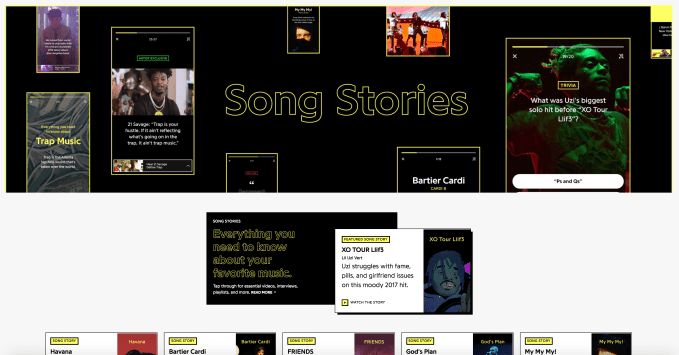 The collaboration between Genius and YouTube is notable, given YouTube’s plans to launch a revamped premium subscription service in the near future. A deeper integration with Genius could be a competitive advantage for YouTube.

And while nothing was announced in terms of a YouTube product today, this launch signals a closer and productive working relationship between two companies – despite the fact that Genius already works with YouTube Music’s competitor Spotify to power its “Behind the Music” feature.

“At YouTube we’re working every day to push the envelope and find new ways to enhance the overall music experience by better connecting artists and fans,” said Lyor Cohen, YouTube’s Global Head of Music, in a statement. “This project with Genius provides a more immersive way to explore music—it’s the perfect example of innovating in pursuit of this goal.”

“Genius and YouTube, the two biggest sources of musical deep cuts and rabbit holes on the planet, are natural collaborators on this mission,” added Ilan Zechory, Genius’s co-founder and president.

Not all bands and artists have been given the Song Story experience, however.

At launch, there’s a Gallery of Stories available on the Genius website, featuring artists like Lil Uzi Vert, Cardi B feat. 21 Savage, Joy Division, Troye Sivan, and others. It remains to be seen how widely the Story format will roll out across the Genius database of song info going forward.