Insider, a service that aims to help brands go about their internet marketing with greater efficiency and success, has landed an $11 million investment led by Sequoia India.

The startup is originally from Turkey where it began life in 2012 as a platform that helped optimize online marketing campaigns. Now at 240 staff across 16 markets, it recently moved HQ to Singapore and today it launches its new ‘Growth Management Platform.’

Those three words together don’t really tell much about Insider’s new product, the aim of which is to help brands, marketers and website owners generally serve dynamic content that is tailored to their visitors. The idea according to Insider CEO Hande Cilingir — who is one of six co-founders of the business — is to give a visitor the most optimized version of the site based on who they are. In many ways, it is similar to LiftIgniter, the U.S. startup that raised $6.4 million last year and was a finalist at TechCrunch Disrupt London 2016.

Insider goes about that task by collecting pieces of data about the visitor — the 90-odd parameters include obvious things include location, the website they are visiting from, the device they are on, etc — all of which is used to showcase the most relevant content or information to ensure that this visitor gets the best experience. Insider said it uses artificial intelligence and machine learning to boost its model, too, helping match potential similarities between users to build a wider and more intelligent picture about the type of people visiting a website.

The goal is really quite simple: keep people more engaged on a website and help website owners with their call to action, whatever that may be. Insider believes it can help lower customer acquisition costs through increased efficiency, while also boost existing conversion rates through customization. 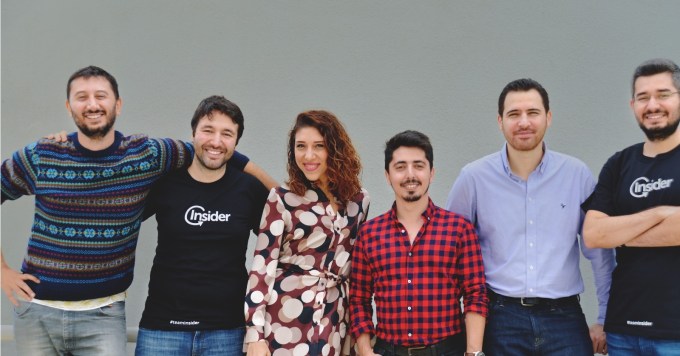 In the case of internet marketing, it is most often to e-commerce or other types of purchases.

That’s strongly reflected in the customer base that Insider claims. The company has put a big focus on Asia’s growing internet market — hence the move to Singapore — and publicly-announced clients for the startup include Singapore Airlines, Indonesian e-commerce firm Tokopedia, UNIQLO, Samsung, McDonald’s, Nissan and CNN.

Sequoia could help open doors, too, since the firm has invested in major consumer names in Asia such as Go-Jek, Carousell and Zomato.

“We were impressed with Insider’s AI platform, and the profound impact on their customer’s key metrics: lower customer acquisition costs, higher retention, faster growth. These customers quickly started to use more and more products from the Insider platform. That has put Insider on a fast growth trajectory, especially in Asia,” said Pieter Kemps, principal at Sequoia India.

Cilingir said the new funds will go towards expanding Insider’s sales team and hiring data scientists and machine learning engineers to develop the platform. The headquarters may be in Singapore now, but the product development and the technical team is spread across Istanbul, Turkey, and Ukraine.

The team is firmly focused on developing its business in Southeast Asia, she added, but it is also eying potential expansions with China and the U.S. among the more audacious new markets that it is considering at this point.

Cilingir is bullish that there’s more to come. Marketing giant Group M predicts that this is the year that online advertising spend overtakes TV for the first time in 17 countries worldwide and she’s optimistic that there will be a greater need for Insider’s products among brands and major consumer names worldwide.

Alongside Sequoia, Insider said that its existing investors Wamda Capital and Dogan Group also took part in the newest round, which is its Series B. The company previously raised a $2.2 million Series A in September 2016 to fund its initial foray into emerging markets.