At a time when the models of traditional social networks are being questioned, it’s more important than ever to experiment with alternatives. Arbtr is a proposed social network that limits users to sharing a single thing at any given time, encouraging “ruthless self-editing” and avoiding “nasty things” like endless feeds filled with trivial garbage.

It’s seeking funds on Kickstarter and could use a buck or two. I plan to.

Now, I know what you’re thinking. “Why would I give money to maybe join a social network eventually that might not have any of my friends on it on it? That is, if it ever even exists?” Great question.

The answer is: how else do you think we’re going to replace Facebook? Someone with a smart, different idea has to come along and we have to support them. If we won’t spare the cost of a cup of coffee for a purpose like that, then we deserve the social networks we’ve got. (And if I’m honest, I’ve had very similar ideas over the last few years and I’m eager to see how they might play out in reality.)

The fundamental feature is, of course, the single-sharing thing. You can only show off one item at a time, and when you post a new one, the old one (and any discussion, likes, etc) will be deleted. There will be options to keep logs of these things, and maybe premium features to access them (or perhaps metrics), but the basic proposal is, I think, quite sound — at the very least, worth trying. 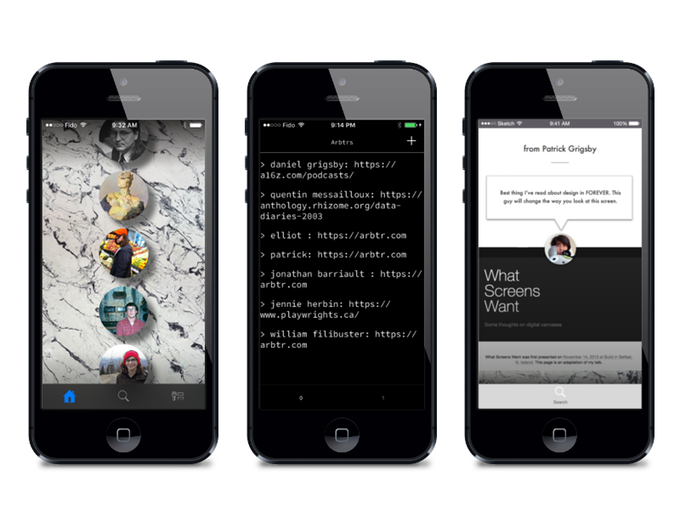 Some design ideas for the app. I like the text one but it does need thumbnails.

If you’re sharing less, as Arbtr insists you will, then presumably you’ll put more love behind those things you do share. Wouldn’t that be nice?

We’re in this mess because we bought wholesale the idea that the more you share, the more connected you are. Now that we’ve found that isn’t the case – and in fact we were in effect being fattened for a perpetual slaughter — I don’t see why we shouldn’t try something else.

Will it be Arbtr? I don’t know. Probably not, but we’ve got a lot to gain by giving ideas like this a shot.