When workflow management platform Asana announced a $75 million round of funding in January led by former Vice President Al Gore’s Generation Investment Management, the startup didn’t give much of an indication of what it planned to do with the money, or what it was that won over investors to a new $900 million valuation (a figure we’ve now confirmed with the company).

Now, Asana is taking off the wraps on the next phase of its strategy. This week, the company announced a new feature it’s calling Timeline — composite, visual, and interactive maps of the various projects assigned to different people within a team, giving the group a wider view of all the work that needs to be completed, and how the projects fit together, mapped out in a timeline format.

Timeline is a new premium product: Asana’s 35,000 paying customers will be able to access it for no extra charge. Those who are among Asana’s millions of free users will have to upgrade to the premium tier to access it.

The Timeline that Asana is making is intended to be used in scenarios like product launches, marketing campaigns and event planning, and it’s not a matter of a new piece of software where you have to duplicate work, but each project automatically becomes a new segment on a team’s Timeline. Viewing projects through the Timeline allows users to identify if different segments are overlapping and adjust them accordingly. 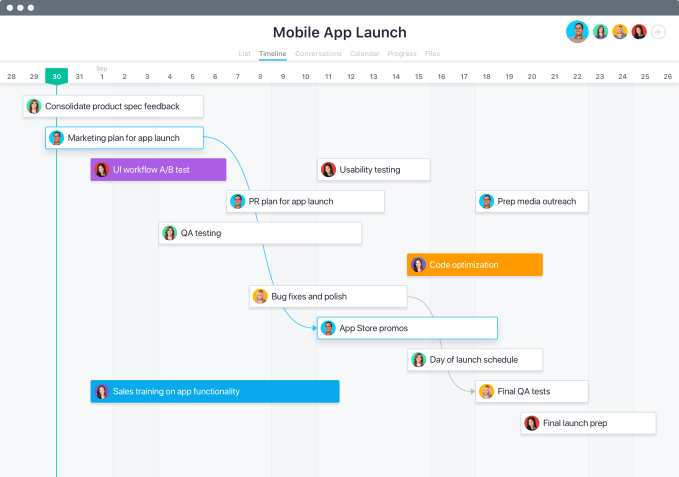 Perhaps one of the most interesting aspects of the Timeline, however, is that it’s the first instalment of a bigger strategy that Asana plans to tackle over the next year to supercharge and evolve its service, making it the go-to platform for helping keep you focused on work, when you’re at work.

While Asana started out as a place where people go to manage the progress of projects, its ambition going forward is to become a platform that, with a machine-learning engine at the back end, will aim to manage a team’s and a company’s wider productivity and workload, regardless of whether they are actively in the Asana app or not.

“The long term vision is to marry computer intelligence with human intelligence to run entire companies,” Asana co-founder Justin Rosenstein said in an interview. “This is the vision that got investors excited.”

The bigger product — the name has not been revealed — will include a number of different features. Some that Rosenstein has let me see in preview include the ability for people to have conversations about specific projects — think messaging channels but less dynamic and more contained. And it seems that Asana also has designs to move into the area of employee monitoring: it has been working on a widget of sorts that installs on your computer and watches you work, with the aim of making you more efficient.

Given that Asana’s two co-founders, Dustin Moskovitz and Rosenstein, previously had close ties to Facebook — Moskovitz as a co-founder and Rosenstein as its early engineering lead — you might wonder if Timeline and the rest of its new company productivity engine might be bringing more social elements to the table (or desk, as the case may be).

In fact, it’s quite the opposite.

Rosenstein may have to his credit the creation of the “like” button and other iconic parts of the world’s biggest social network, but he has in more recent times become a very outspoken critic of the distracting effects of services like Facebook’s. It’s part of a bigger trend hitting Silicon Valley, where a number of leading players have, in a wave of mea culpa, turned against some of the bigger innovations particularly in social media.

Some have even clubbed together to form a new organization called the Center for Humane Technology, whose motto is “Reversing the digital attention crisis and realigning technology with humanity’s best interests.” Rosenstein is an advisor, although when I tried to raise the issue of the backlash that has hit Facebook on multiple fronts, I got a flat response. “It’s not something I want to talk about right now,” he said. (That’s what keeping focussed is all about, I guess.)

Asana, essentially, has taken the belief that social can become counterproductive when you have to get something done, and applied it to the enterprise environment.

This is an interesting twist, given that one of the bigger themes in enterprise IT over the last several years has been how to turn business apps and software more “social” — tapping into some of the mechanics and popularity of social networking to encourage employees to collaborate and communicate more with each other even when (as is often the case) they are not in the same physical space.

But social working might not be for everyone, all the time. Slack, the wildly popular workplace chat platform that interconnects users with each other and just about every enterprise and business app, is notable for producing “a gazillion notifications”, in Rosenstein’s words, leading to distraction from actually getting things done.

“I’m not saying services like Slack can’t be useful,” he explained. (Slack is also an integration partner of Asana’s.) “But companies are realising that, to collaborate effectively, they need more than communication. They need content and work management. I think that Slack has a lot of useful purposes but I don’t know if all of it is good all the time.”

The “team brain” role that Asana envisions may be all about boosting productivity by learning about you and reducing distraction — you will get alerts, but you (and presumably the brain) prioritise which ones you get, if any at all — but interestingly it has kept another feature characteristic of a lot of social networking services: amassing data about your activities and using that to optimise engagement. As Rosenstein described it, Asana will soon be able to track what you are working on, and how you work on it, to figure out your working patterns.

The idea is that, by using machine learning algorithms, you can learn what a person does quickly, and what might take longer, to help plan that person’s tasks better, and ultimately make that person more productive. Eventually, the system will be able to suggest to you what you should be working on and when.

All of that might sound like music to managers’ ears, but for some, employee monitoring programs sound a little alarming for how closely they monitor your every move. Given the recent wave of attention that social media services have had for all the data they collect, it will be interesting to see how enterprise services like this get adopted and viewed. It’s also not at all clear how these sorts of programs will sit in respect of new directives like GDPR in Europe, which put into place a new set of rules for how any provider of an internet service needs to inform users of how their data is used, and any data collecting needs to have a clear business purpose.

Still, with a different aim in mind — helping you work better — the end could justify the means, not just for bosses, but for people who might feel overwhelmed with what is on their work plate every day. “When you come in in the morning, you might have a list [many things] to do today,” Rosenstein said. “We take over your desktop to show the one thing you need to do.” Checking your Instagram feed be damned.