Michigan saw a historic amount of snowfall in 2018. And it’s not done. It’s snowing as I write this and it snowed nearly every day since I took delivery of this burgundy 2018 Lincoln Navigator. Excuse the dirty car shown in the photos. That’s life in the Midwest: half the year it’s impossible to keep cars clean of salt and grime and, to me, that’s the best time to review a vehicle. I’m happy to report the new Navigator is a comfortable refuge from the snowy winter.

I spent a week in the 2018 Navigator running from Flint, Michigan to Ann Arbor to Detroit. I filled up the 23-gallon tank enough to know to take it easy on the lively 3.5L EcoBoost V6. The 2018 Lincoln Navigator is luxurious and confident — but thirsty.

This is a luxury SUV. It’s not a sport truck and it’s not high-tech paradise, though it can play the part of both. The new Navigator was clearly built to be as comfortable as possible, and along the way Lincoln constructed one of the best luxury SUVs on the market. 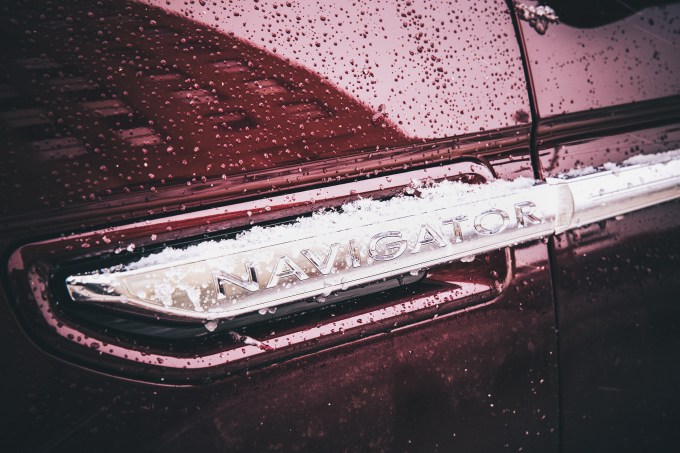 Winter hit Michigan hard this year and I found my 2012 Dodge Durango R/T in the ditch several times. It started snowing in December and didn’t stop until halfway through March. I grew up in Michigan and still live in the state. Driving in snow doesn’t bother me, though jumping into an unfamiliar vehicle and navigating snow-covered roads can be challenging. But not in this Navigator. I found it handles snow and slush and ice without an issue.

The 2018 Lincoln Navigator is a full-size SUV. It sits as high as a Ford F-150 and tends to lumber about as such. The ride is confident and stable. There’s little sway on tight expressway ramps and the automatic four-wheel drive quickly activates when a tire starts to spin.

This Navigator isn’t a sport truck, but it gets up and goes thanks to Ford’s fantastic 3.5L EcoBoost V6. This six-cylinder twin-turbo kit has found its way into nearly every full-size platform Ford offers. The Navigator is gifted with an updated version of the engine and it offers ample power across its range. The 3.5L surprises in this massive luxury SUV. It’s lively and powerful and more than enough to make the ride comfortable. During my time with the truck, I never felt at a loss of power, though I tried.

The engine is key to the Navigator’s appeal on several levels. First, 3.5L V6 offers decent fuel economy if driven conservatively while offering a decent bit of excitement if driven with that intent. Second, it allows Lincoln to say the Navigator is able to tow 600 lbs more than the Cadillac Escalade, which features a massive 6.2L V8. While both vehicles can ably pull a pontoon, the Lincoln does so with 510 lb.-ft of torque over Cadillac’s 460 — though without a boat of my own, I’m unable to confirm if the difference is felt in the real world.

The steering is light and responsive, though it’s impossible to forget this is a massive vehicle. It drives like a truck — though not your grandfather’s work truck. The driver sits in a commanding position that makes for good visibility. The vehicle’s suspension lets it cruise over rough roads and most bumps are absorbed. It’s a big SUV and there’s a fair amount of body roll on on-ramps. Parking isn’t an issue. There are plenty of cameras positioned around the vehicle to help maneuver this land yacht.

The interior of the new Navigator stuns. Wood, leather and chrome adorn the surfaces and walks close to the line of bling. It begs the confirmation that it ultimately comes from an American automaker. Take the badging off the interior and it could easily be mistaken as a luxury European SUV — though this Navigator is bigger than anything offered across the pond.

It’s roomy inside. Storage is abundant but cleverly hidden so as not to look like a minivan. There’s plenty of leg room for second-row passengers while the third row is surprisingly roomy.

The seats are something special. Sure, they’re comfortable and supportive like any found in high-end SUVs. It’s their design that sets them apart. The cushions jet out from a large back support making them look more like an Eames lounger than an overstuffed leather recliner. The design is a stark departure from most automotive seats, and I’m a fan.

The back seats are not nearly as comfortable. They’re supportive and offer several seating positions. In this tester, the rear seat is equipped with a center console that sports a small LCD screen that displays the media currently playing. The kids love it and I’m sure Uber passengers would too. As a parent to two kids, I found it annoying to cede control of the radio to the backseat. Thankfully there’s a button above the climate controls that disables the backseat controls, because I can only listen to Radio Disney for so long.

There’s an LCD screen mounted in the center of the dash. It’s large enough to be usable though not distracting. The best part? The screen doesn’t show fingerprints. There’s clearly a coating over the screen that somehow, magically, makes fingerprints invisible. Glare doesn’t seem to be an issue, though, as previously mentioned, it’s been snowing for a week and I haven’t seen the sun at all during my testing.

The 2018 Lincoln Navigator is equipped with a Lincoln-badged version of the Ford Sync 3 infotainment system. The automaker rolled out this system with 2016 models and it’s a massive improvement over previous Sync versions. It’s not the best infotainment system available, but it’s good enough. Vehicle functions and controls are in logical places and Ford’s AppLink system offers support for some third-party apps now, including Waze.

Android Auto and CarPlay are also available when used with compatible devices. I’ve grown to avoid these systems and prefer to stick with most systems developed by automakers. I was initially a fan of CarPlay, but Apple has yet to advance the platform, and now several years after its launch, it feels dated and unusable.

The Navigator’s smartphone app is clever. Need to put in navigation info? With the Lincoln Way app, drivers can input a destination on their smartphone app before they get into the vehicle and send those directions to the Navigator. It’s much easier than entering the destination through the in-vehicle system. The app also lets drivers start the car, order roadside assistance or service and locate the car.

This new Navigator is in a class of its own. The Cadillac Escalade’s interior is vastly inferior, the Mercedes-Benz GLS is dated and much less roomy. The Lexus LX and Toyota Land Cruiser have better off-road chops, but the platform is over 10 years old and it shows. Land Rover’s SUVs are more expensive and its three-row models are much smaller and less powerful than the Navigator, though new models are coming out soon.

There simply isn’t a more luxurious, roomy six- or seven-passenger vehicle available than the new Navigator.

I’m in the market for a new vehicle and recently test drove several used 2017 Lincoln Navigators. It’s a nice truck, but lacks the “wow” factor of the 2018 Navigator. Where past models were clearly a rebadged Ford, complete with similar plastic trim and equipment, the new Navigator is a fresh departure from its Ford counterpart, the Expedition. Similarities between the two models still exist, though they’re less pronounced, with the Lincoln clearly getting the nod toward luxury.

The Navigator is 25 years old this year. It was one of the first American-made luxury SUVs, but it has nearly always been overshadowed by the Escalade — and for good reason. The Escalade has always offered more everything than the Navigator. But not anymore.