Over 13 million augmented reality apps built using Apple’s ARKit have been downloaded since the release of iOS 11 on September 19, 2017, according to new data from app intelligence firm, Sensor Tower, which took a look at the state of the AR app ecosystem, now that it’s had time to become more established. It found that – as with many new developments in the app world – games have been seeing the most traction, in terms of ARKit adoption.

A month after iOS 11’s release, ARKit-only apps had then surpassed three million downloads, with games accounting for 35 percent of downloads. Six months later, games have grown to 47 percent of the now 13 million ARKit-only app downloads. 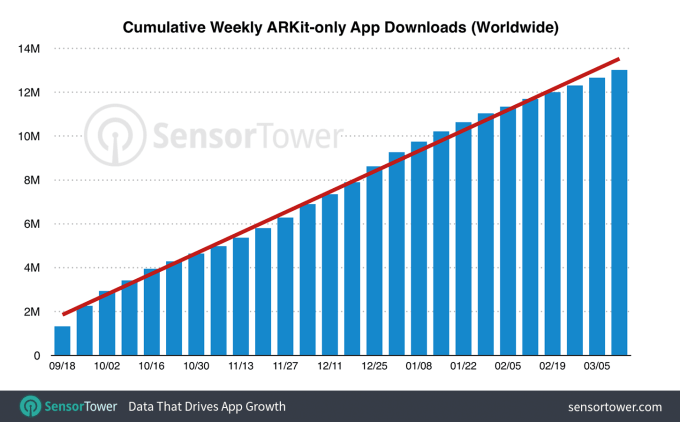 Games, of course, helped to popularize augmented reality before ARKit’s launch. Thanks to the worldwide craze that was Pokémon Go, mobile users became familiar with AR’s potential to enhance gaming as they tried to catch the animated Pokémon appearing in the real world, visible only through their smartphone camera’s viewfinder. 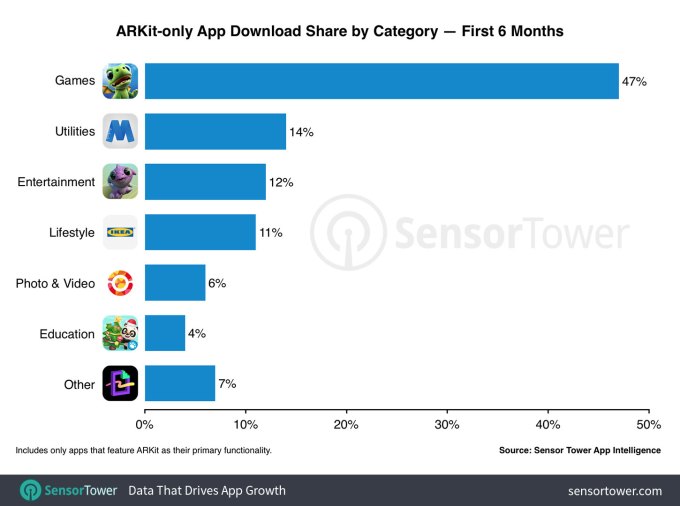 If you’re wondering why the top app isn’t Pokémon Go, it’s because Sensor Tower’s analysis focused on ARKit-only apps, not ARKit-compatible apps that added some AR functionality over the past six months. Pokémon Go is part of that latter group.

But if you were to combine all AR apps, including ARKit-only apps and those that added new AR functionality when ARKit was released, then there would be well over 2,000 AR apps on the App Store today, says Sensor Tower. This matches up with Apple’s officially released figures, too.

Other popular ARKit-only app categories include utilities (like AR measuring tapes or eBay’s tool for finding the right shipping box), entertainment apps (like the AR children’s book, My Very Hungry Caterpillar), lifestyle apps (like the now numerous apps for helping consumers shop furniture by placing items in their own rooms via AR), photo and video apps (like Holo), and educational apps. 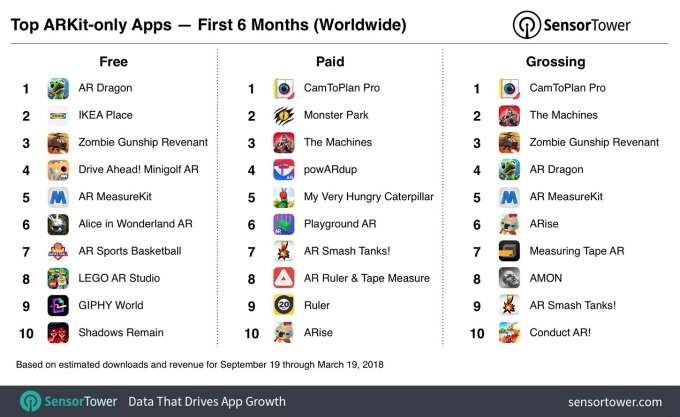 In addition to games, ARKit-only lifestyle apps have seen sizable download growth, as well, more than doubling their share of AR app installs from 5 percent to 11 percent on the heels of releases from IKEA, Houzz, Wayfair, and others. Meanwhile, utilities have seen their share of downloads decline from 19 percent to 15 percent.

The ARKit-only gaming chart has remained largely the same as it was six months ago, however, save for a few additions like Shadows Remain from Halfbrick, the gaming studio behind Fruit Ninja and Jetpack Joyride. Other news entries include AR Smash Tanks!, Playground AR, and Orbu, all of which have benefited from Apple’s promotion.

AR Dragon has been at the top of the top free game chart for months, while The Machines has been the number one top paid and top grossing game. 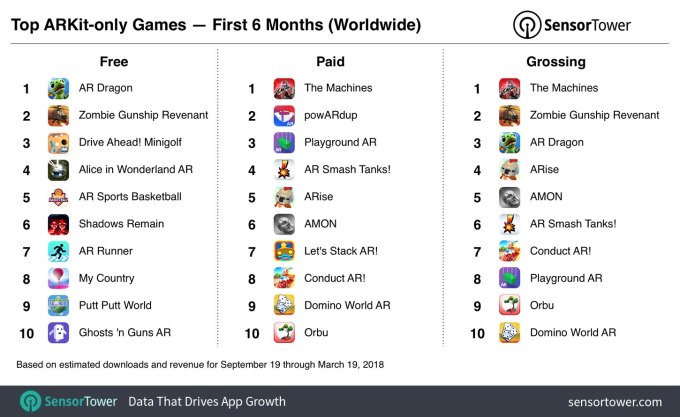 Other top apps include IKEA Place (#2) and GIPHY World (#5). The top paid and grossing app charts are instead cluttered with utilities, generally AR rulers and measuring tapes. 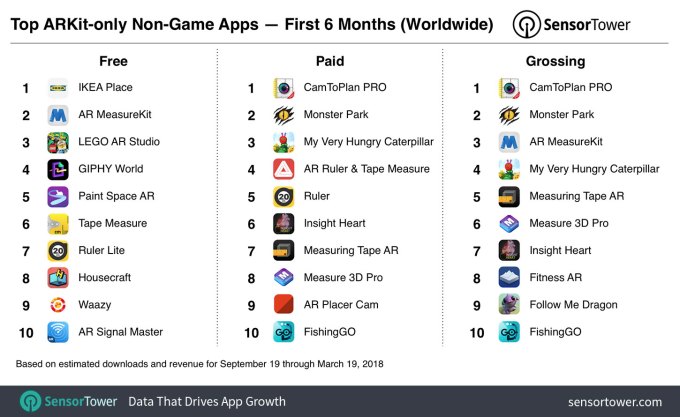 Apple has played a big role in pushing ARKit adoption, with everything from on-stage demos to App Store features, and even integration into Apple’s learn-to-code app for kids, Swift Playgrounds, as of late.

But the AR app industry is still in its early days, and as ARKit itself develops, there’s room for more types of AR apps to emerge, too.

One potentially interesting upgrade to ARKit 1.5, which rolled out in beta to developers back in January, is the added support for wall detection. With this feature, ARKit can now recognize vertical surfaces, and place objects on those surfaces. The kit was also improved with better horizontal plotting, 1080p video, and computer vision-based image recognition – meaning ARKit apps can now “see” things like 2D objects, such as posters or art on a wall, then place related objects nearby.

Apple is not alone in giving AR apps a boost. Google also released its answer to ARKit with ARCore earlier this year. In the months since, a number of the ARKit-only apps have rushed to make their Android versions ARCore-compatible as well. Last week, Google said there are now over 60 ARCore apps on the Play Store, many of them games.