Kloudless makes it easier for developers to connect their applications to a variety of third-party tools for file storage, customer management, calendaring and other services through a unified API. It’s a bit like an IFTTT for developers. Today, the company announced that it has raised a $6 million Series A round led by Aspect Ventures, with participation by Bow Capital, Alibaba Taiwan Entrepreneurs Fund, Heavybit, and Ajay Shah. These new investors join existing investors David Sacks and Tim Draper.

The company says that it saw a 200 percent revenue growth over the course of the last year and that its platform now has over 15,000 registered developers who are making more than 15 million API calls every day. Kloudless’s monetization plan mostly focuses on providing developers with different degrees of service, SLAs and features like single-sign on support and rules. Interestingly, the company doesn’t charge based on API calls and offers a generous 50GB of free transfer volume, even for free accounts, with additional transfer charges costing $20 per 100GB. 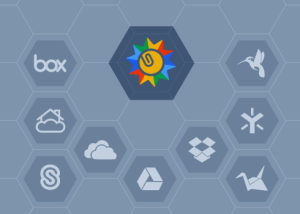 “Our mission at Kloudless is to tie together the business software stack,” said Eliot Sun, CEO and co-founder of Kloudless. “While we’re starting with a solution for software vendors, this is just a small piece of an enormous opportunity to help all businesses make the most of the data and functionalities from their software investments.”

The company plans to use the new funding to expand its connector ecosystem to support a wider variety of third-party services and to launch new tools to enable automation and custom integration capabilities.

“In the past year, Kloudless has seen accelerating traction across all key developer metrics, as developers have increasingly realized the efficiencies of a ‘build once, integrate many’ approach to meeting customer demand for integrations,” said Mark Kraynak of Aspect Ventures, who will be joining the board as a part of the financing. “We’re excited to support Kloudless and their efforts to capture what figures to be a multi-billion opportunity in connecting businesses to the cloud.”