With the explosion of streaming services now available, it’s becoming more difficult to figure out not just what movie or TV show to watch next, but where you can actually watch it. Google today is rolling out its solution to this problem with a significant revamp of its Google Play Movies & TV app and an update to the Google Play Store itself that will show you which streaming services have the content available, in addition to whether it’s available for rent or purchase, as before.

The end result is something that’s similar to Apple’s own TV app, which combines users’ own library of movies and TV with the ability to seek out what’s trending and available in the world of online video.

In the updated Google Play Movies & TV app, you’ll now find three tabs in the new bottom navigation bar which will direct you to your Home, Library or your Watchlist. The watchlist is a feature the app recently gained as well, but now it has a much more prominent position.

As you browse through the app, you can click on titles to read more about them, as before, but now you’re also able to see where the item can be streamed. 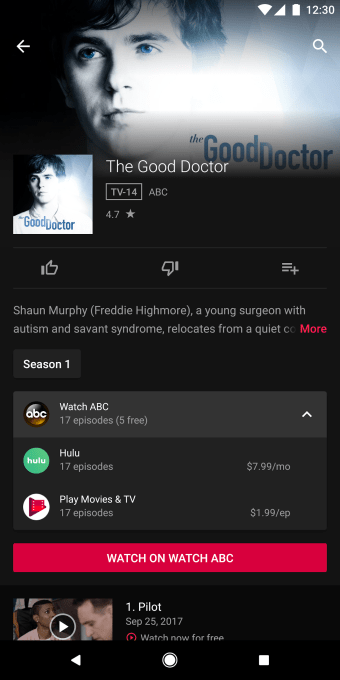 At launch, Google is working with 28 streaming services whose content libraries are now integrated in Google Play Movies & TV. That’s fewer than Apple’s TV app supports, which is currently over 60.

But it will find content even if it’s an exclusive to the streaming provider, and not necessarily something Google has for rent or sale. That means you can find original programming – like Amazon’s “The Man in the High Castle” – and then start watching it on the streaming service that hosts it.

“We deeplink right into playback for that [third-party streaming] app,” explains Ben Serridge, the product manager for the Movies & TV app at Google. “So if I wanted to start watching ‘The Good Doctor’ pilot, I press the play button and it goes into the ABC app and start playback.”

Notably missing is Netflix, whose content is searchable in Apple’s TV app.

Serridge didn’t comment on why it’s missing, saying only that “we would very much like to have all the apps that distribute this kind of content on Play participating” –  effectively tossing the ball back to Netflix’s court.

Even without Netflix, the feature is useful if not comprehensive. It will show you the services hosting the content, whether it’s freely available to stream, if you need a subscription (as with HBO Now), the associated costs, or if you need to login with pay TV credentials to watch.

This is especially helpful because some of the network TV apps offer a teaser of a show with a few free episodes, but not complete seasons. The Google Play Movies & TV app will help you track down the rest elsewhere, if need be.

The app will also now help you narrow down searches thanks to a robust filtering system that lets you click on tags by genre, mood, decade, and more. For example, you could click on “Family,” “Drama,” Award winning,” Highly rated,” Comedy,” and other filters. 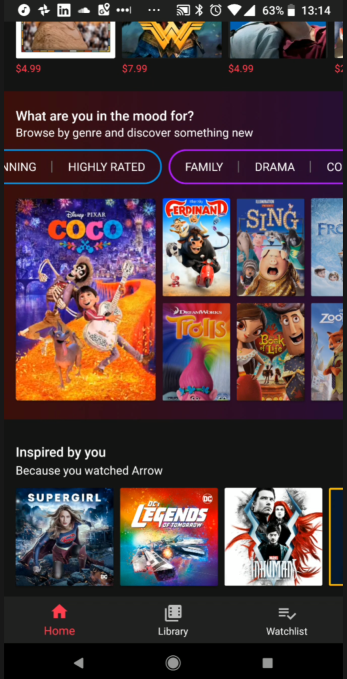 In addition to helping you find content, stream it, or add it to your Watchlist, the app includes personalized recommendations. These will be partly based on items you’ve previously watched, but you can also explicitly signal your interest or distaste as well, by clicking on the thumbs up or thumbs down button. The thumbs down will remove the item from your suggestions entirely.

Outside the app itself, the Play Store is being updated to show you the same information about content availability.

Solutions like the new Google Play Movies & TV app and Apple’s TV app are handy in the cord cutting era where content is spread out across networks, services, and other over-the-top offerings. But even these apps aren’t enough. Not only is Netflix missing from Google’s app, so is its own YouTube original content – and that’s the same company!

Also not addressed by either Apple or Google’s app are which shows may be available to stream or record via live TV services like YouTube TV, Hulu Live TV, PlayStation Vue, DirecTV Now, and Sling TV. (Although, to be fair, that’s not only a different set of services, it’s also a much larger challenge given that broadcast network availability varies by market. A dedicated solution like Suppose.tv or Fomopop’s live TV finder may work better.)

Meanwhile, there are other tools for finding and tracking favorite shows, like Reelgood or TV Time (or a jailbroken Fire TV stick we should admit), but they don’t have the benefit of matching content from a rent-and-buy marketplace like Google Play, or being available across phone, tablet, and desktop web, like Google Play.

Google says the new features will roll out to Android phones and tablets in the U.S. over the next few days.