The advanced universal remote market is not a very crowded market. In fact, for a while now, Logitech’s Harmony line has been pretty much the only game in town. Newcomer NEEO wants to upset that monopoly with its new NEEO Remote and NEEO Brain combo ($369), which is a system that can connect to just about any AV system, along with a smorgasbord of connected smart devices including Nest, Philips Hue, Sonos and more.

NEEO’s two-part system includes the Brain, which, true to its name, handles all of the heavy lifting. This is a puck-shaped device with 360-degree IR blasters dotting its outside perimeter, and which has one IR extender out (there’s one in the box) for connecting devices held within a closed AV cabinet, for instance. This central hub also connects to your Wi-Fi network, and setup requires plugging it into your router via Ethernet to get everything squared away, similar to how you initially set up Sonos speakers, if you’re familiar with that process.

Most of the setup work you need to do to get NEEO working happens on your phone, and that’s where it becomes apparent that this smart remote was designed for a modern context. Logitech’s Harmony software has come a long way, and now you can do everything you need to do from the iOS and Android app, but it’s still somewhat apparent that its legacy is as something you initially setup using a desktop and somewhat awkward web-based software. The NEEO feels at home on mobile, and it makes the setup and configuration process much better overall.

The other core component of the NEEO system is the NEEO Remote. This is a fantastic piece of industrial design, first of all. It’s a sleek rectangle crafted from aerospace-grade aluminum that oozes charm, in a way that nothing in the current Logitech Harmony lineup can come close to matching. The minimalist design still doesn’t suffer from the ‘which way is up?’ problem that the Apple Remote faces, because of subtle design cues including bottom weighting and the presence of ample physical buttons. 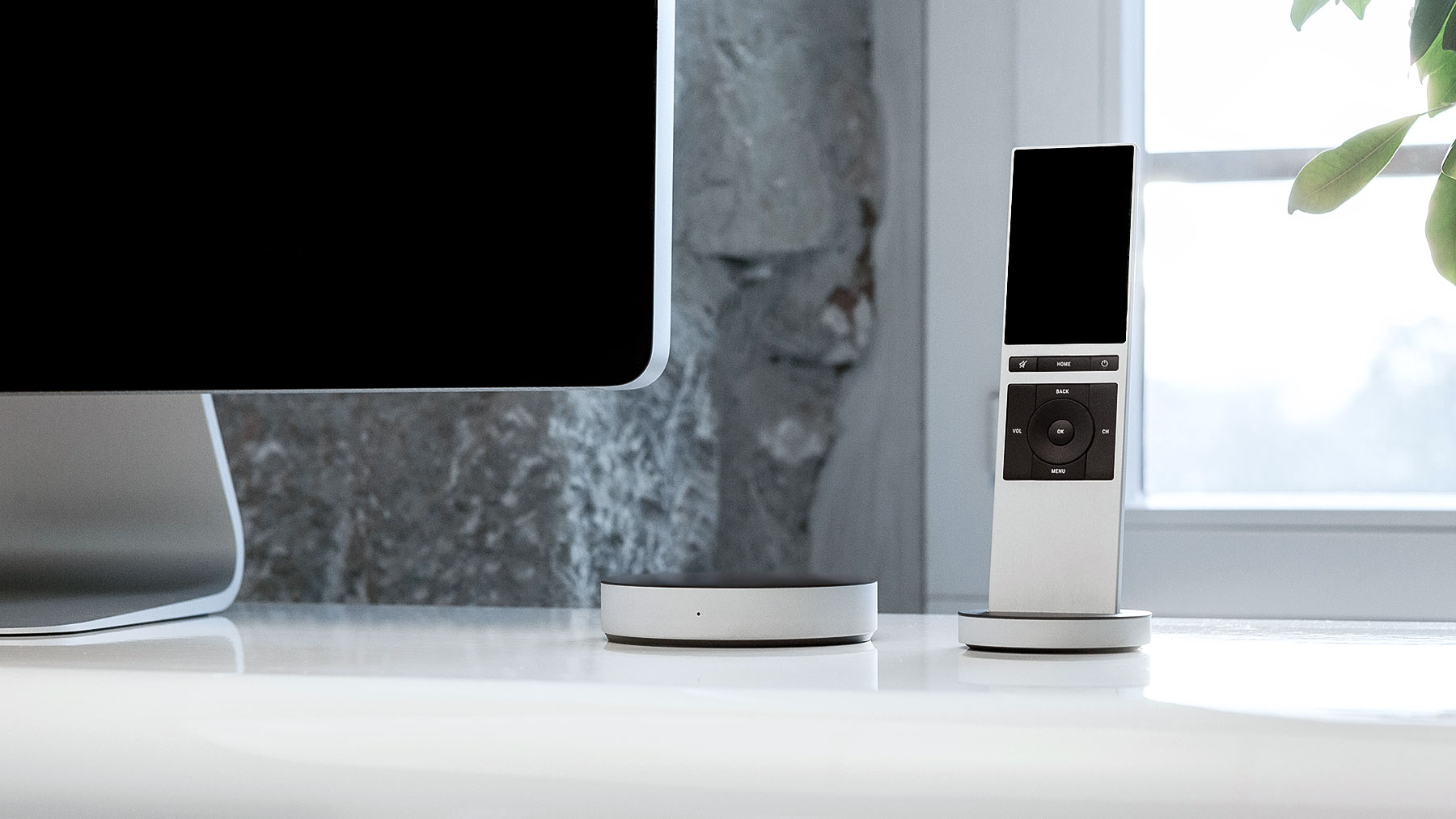 A NEEO Remote isn’t necessary for the system to work – you can just use the Brain along with the companion app for iPhone or Android, but the remote is a joy to hold and use, thanks to its unique design, and it features a super high density display that’s extremely responsive to touch input and pleasingly responsive to touch. NEEO took a lot of time to get this touchscreen experience right, and it pays off, delivering a clear and simple control interface that shifts to suit the needs of whatever activity you’re running at the time.

The NEEO Remote also has an “SOS” feature so that you can locate it if you happen to misplace it, and it can even be configured to recognize different hands if you want to set profiles for distinct members of the household, or set parental control profiles limiting access to certain content or devices. This kind of thing is where NEEO’s feature set exceeds the competition, and shows a particular attention to modern device use cases.

One NEEO Remote can also control multiple NEEO Brains, which is another limitation of the completion. That means you can set up NEEO Brains in each room where you have devices to control, and carry your remote from place to place instead of having to have multiple. The NEEO Brain is still $200 on its own, however, so it’s definitely still a barrier to entry.

NEEO otherwise does pretty much everything you’d expect a smart remote to do in 2018: You can set recipes on the deice itself, including with triggers like time-based alarms or motion detection (without using IFTTT). You can connect it to Alexa, though that functionality is limited at the moment, with more updates promised in future to make this better.

The bottom line is that NEEO offers a competent, intelligent alternative the big dog on the block, Logitech’s Harmony system. Logitech’s offering is still more robust and mature in terms of delivering Alexa and Google Assistant compatibility, as well as rock solid performance, but NEEO has some clever ideas and unique takes that will serve more patient and tech-forward users better over time.