What does winning the Alexa Skills Challenge earn you from Amazon? Apparently, in addition to the $20,000 Grand Prize, you might also have your skill yanked from the Amazon Skill Store without warning. At least, that’s what seems to have happened to the grand prize winner from the recent Alexa’s kids competition, Pretzel Labs. Its winning submission, a fun skill called “Kids Court” where parents and kids settle arguments together using Alexa, has disappeared from Amazon’s Skills store.

There’s no update provided on the developer’s website or social media about the removal – and as a recent grand prize winner, one would have to assume a removal was unplanned. 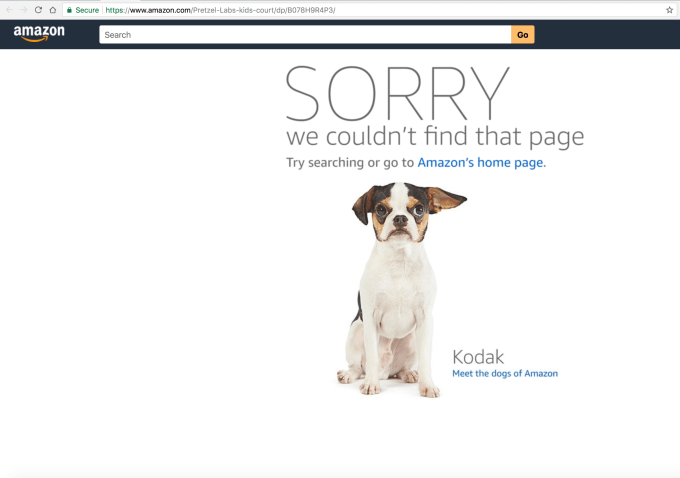 Above: The Amazon.com-hosted page for the Kids Court skill

The problem also doesn’t appear to be one with the developer’s account, as other skills by Pretzel Labs – like “Freeze Dancers” – are still available, as of the time of writing.

That seems to indicate the skill was pulled for some other reason – like a content violation, a violation of terms, or just an accident. It’s not clear what would have triggered this, however, as the skill had not been substantially updated since it won Amazon’s contest.

Above: The Kids Court skill, from Google’s cache

Thousands of developers from 30 countries had registered for the Alexa Skills kid’s challenge, where they competed for a grand prize of $20,000, five bonus prizes ranging from $7,500 to $10,000, and a $5,000 prize for each of the 20 finalists. The competition was meant to help seed Alexa’s ecosystem with skills that would be popular with children and families, now that Alexa supports parental consent and COPPA compliance for skills.

Kids Court won the competition for its silly, family friendly skill that helps kids get over their disagreements.

“I decided to address one of the most agonizing parts of family life – kids fighting – and created Judge Lexy, which is an objective, quirky judge that helps kids settle their battles,” explained Pretzel Labs founder Adva Levin, in Amazon’s blog post about the winners.

The Alexa skill puts the dispute through a mock trial process and renders a verdict. (Kids might not fully understand words it uses like “plaintiff” and “defendant,” however, so it might be a better skill to use with mom or dad present.) The “judge” then issues a goofy punishment, like “try to stand on your hands.”

While it’s not unusual for an app of any kind – including a voice app – to get pulled from the app store when in violation of the store’s terms, it is odd that Amazon would pull a Grand Prize winner without at least trying to work out the problem in question with the developer first.

Otherwise, it could just look…you know…embarrassing for Amazon.

Pretzel Labs says Amazon told them today the removal was a “misunderstanding” and Amazon is working to get the skill returned to the Alexa Skill Store.

An Amazon spokesperson confirmed to TechCrunch that the company monitors live skills for quality, and it found Kids Court needed improvements. Amazon said it worked with the developer to make those improvements and the skill should return shortly*. [See update below.]

Regardless of what issues were present, this was surely a ham-fisted way of getting them addressed. It signals there’s a disconnect between Amazon’s ability to grow its voice app marketplace to now over 30,000 skills in the U.S. and the abilities of its app review team to properly handle the problems that arise.