Cloudflare’s co-founder and CEO Matthew Prince says developers have had tools at their disposal to understand why apps crash on the device itself, but they have lacked visibility into the network, which can be a major contributor to app instability.

Developers access the monitoring capability by adding a couple of lines of code to their iOS or Android apps. After that, they can log into a web console to see network performance metrics. The tool is designed to surface problems like dropping packets because of a poor signal or moving from WiFi to a mobile a network, each of which can cause an app to hang or otherwise misbehave. 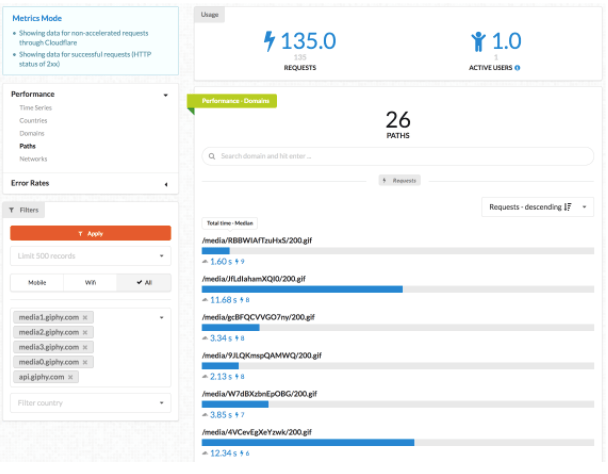 The tool gives you the ability to see how the network is performing in various parts of the world and where you are seeing issues and as it gathers and display information, it should help correlate performance issues with a flaky network and the impact that could be having on app performance.

Over time, he says they will be partnering with other monitoring tools to give developers a single place to check their performance issues. “Our goal is how can we get networks to perform better and give app developers better insight about network behavior.” Prince said.

Prince says, for starters they are providing some basic suggestions on how to improve performance, but in the future, they plan to integrate the network monitoring tool more deeply with the rest of the Cloudflare toolkit to make it easier to tweak performance problems.

Cloudflare also sees this as a way to build a better understanding of how networks are performing in general, and as they pull this data together, they plan to publish a mobile network reliability report. “We expect as this gets built into [more apps], and gives us visibility into mobile network providers, we will able to see who is providing the highest level of service and who has spotty or bad data services,” he explained.