YouTube just became the Top Grossing iPhone app in the U.S. for the first time on Tuesday, after flirting with the top spot a number of times over the years, but never reaching higher than No. 3. The milestone was first spotted by the app store intelligence firm Sensor Tower, which notes that the U.S. is the only country where YouTube’s iPhone app has ever hit No. 1.

The app has been climbing up the Top Grossing charts for years, however, thanks to the launch of YouTube Red in-app subscriptions in fall 2015. In fact, YouTube Red’s arrival almost immediately pushed the app into the Top Grossing charts. The month after Red’s launch, the YouTube iPhone app jumped all the way up to No. 6, we noted at the time. It was then estimated to be bringing in more than $100,000 per day — and perhaps as high as $300,000, excluding iPad.

YouTube’s iOS revenue has grown remarkably since then, of course, as YouTube Red itself grew in popularity, combined with other trends, like the rise of cord-cutting, YouTube’s youngest users finally getting their own phones, streaming plans from mobile carriers that don’t count YouTube’s data or those offering cheap unlimited data, the growth of live streaming and the launch of other features to engage YouTube viewers — like messaging, Community, Reels and more.

It’s unclear what may have pushed YouTube to No. 1, though. And it may have not been anything remarkable, just a steady climb upwards finally being rewarded, or maybe even a small tweak to Apple’s ranking algorithm.

According to Sensor Tower, gross user spending to date is more than $200 million worldwide on iOS since the start of YouTube’s in-app monetization in 2015. Last month it grossed approximately $14 million, a 133 percent year-over-year increase from February 2017. Though this month has not yet ended, YouTube’s worldwide iOS revenue is up 150 percent year-over-year, to more than $12 million. 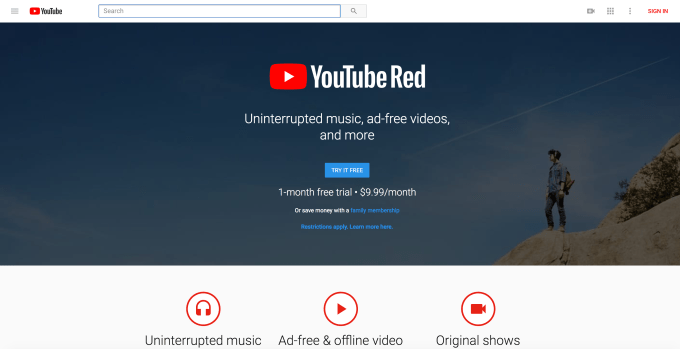 Although it’s obvious, we should point out that this revenue figure doesn’t include other sources, like YouTube Music or YouTube Gaming, which both also include in-app purchases. It also doesn’t include Google Play, nor does it take into account the money YouTube makes in other ways, like rentals, purchases and, of course, advertising.

The Top Grossing chart was removed from Apple’s App Store with its big makeover in iOS 11, but app store intelligence firms like App Annie and Sensor Tower still have access to this data.

YouTube has not commented on Sensor Tower’s data. We’ll update if that changes.