By framing it as a human rights issue, Amnesty International says it hopes to be able to push Twitter to enforce its own policies consistently and be transparent about how it’s doing so.

“Twitter’s failure to adequately and consistently enforce their own policies is leading women to either silence or censor themselves online,” Dhrodia told me. “So women are either leaving the platform, they’re thinking five or six times over before they post anything, they’re taking social media breaks. They’re coming up with a whole bunch of different coping mechanisms in order to avoid violence and abuse because they know by speaking out, it’s not going to be dealt with.” 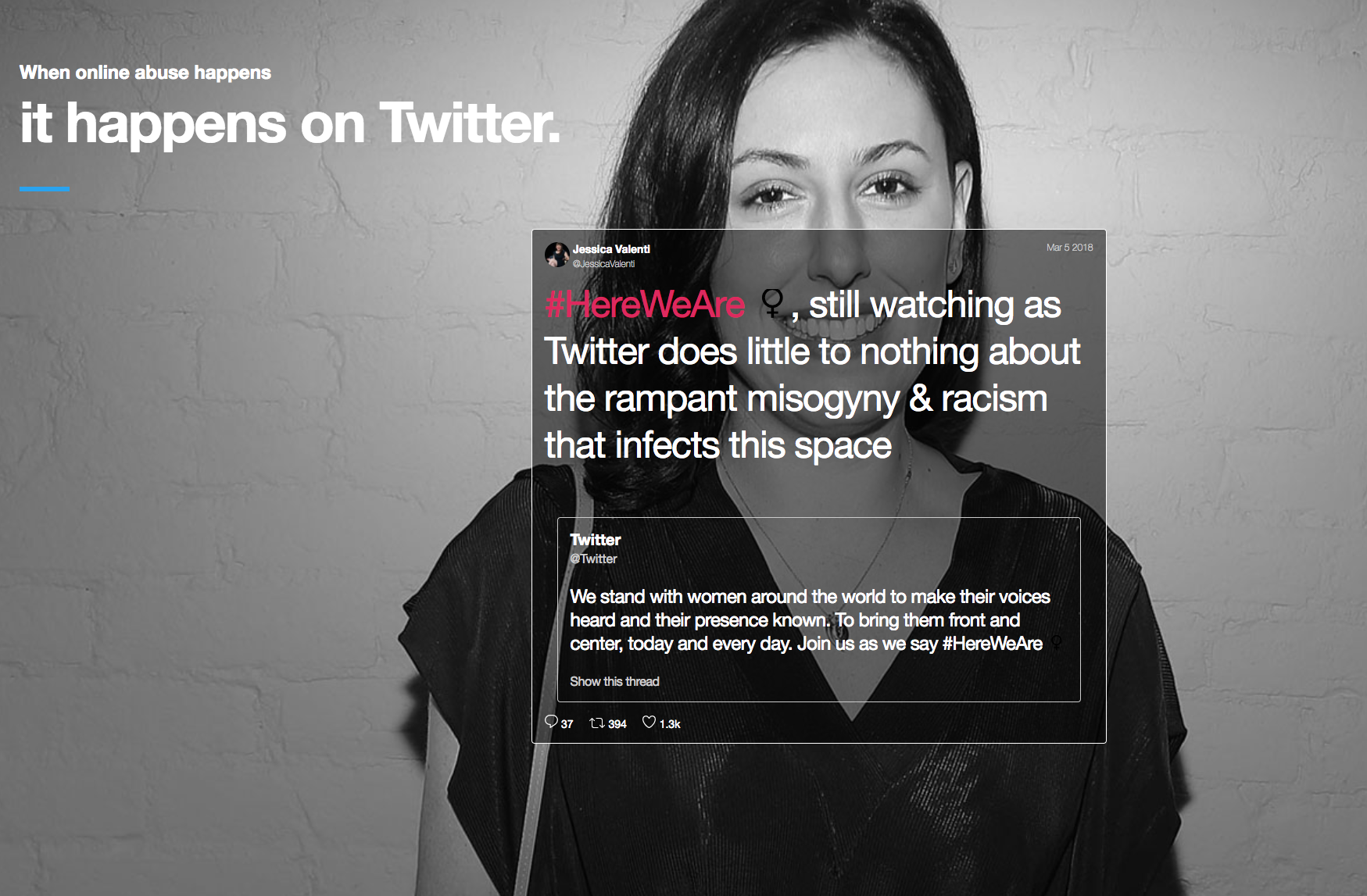 “The assertion that Twitter is consciously unengaged with human rights issues is an unfair representation not just of the facts, but of the ethos of our dedicated teams, and the core mission of the company,” Twitter Legal, Policy, and Trust and Safety Lead Vijaya Gadde said in a statement to TechCrunch.

Although Twitter CEO Jack Dorsey has publicly said the company is looking for help to address its issues around safety, Amnesty International says Twitter has declined to provide the organization with any “meaningful data on how the company responds to reports of violence and abuse.”

This report comes after Amnesty International’s 14-month investigation that combined quantitative and qualitative research. The report is based on interviews with 86 women and non-binary people, including journalists, politicians and everyday users across the U.S. and the UK about their experiences online.

“When talking to them about their experience of violence and abuse, Twitter came up consistently as the platform where most women had experienced violence and abuse and also where they felt it was the company that was doing the least to remedy the issue,” Dhrodia said.

The report goes on to outline some recommendations for Twitter moving forward. The first is to share specific examples of the type of violence and abuse Twitter won’t tolerate. Another is to share data on how quickly Twitter responds to reports of abuse, while another is to ensure its decisions to restrict certain content are consistent with international human rights law.

Gadde says Twitter agrees with many of the recommendations in Amnesty International’s report, noting how some of the work is already underway or has been completed. In the last 16 months, Twitter says it has made more than 30 individual changes to its product, policies and operations, and has increased its “action rates” ten-fold. Gadde added:

We are committed to understanding how we can better combat the hatred and prejudice within society that gives rise to online abuse and how we can encourage a healthier public conversation. We are an open platform and hold a mirror up to human behaviors – both the good and the bad. Everyone has a part to play in building a more compassionate and empathetic society, including Twitter. Our policy, product, and engineering teams continue to work collaboratively to find ways to innovate to protect our users and enhance their experience, particularly as those in our society intent on harm find new ways to hurt and abuse. We look forward to ongoing constructive engagement with Amnesty International and others to find real, lasting solutions to ensure women are safer and feel safer online.

Earlier this month, Twitter began soliciting proposals from the public to help the platform capture, measure and evaluate healthy interactions. The goal is to come up with metrics to measure the health of the interactions on Twitter. But Twitter eventually wants to take that a step further, Dorsey said in a public conversation via Periscope.

“Ultimately we want to have a measurement of how it affects the broader society and public health, but also individual health, as well,” Dorsey said.

As Twitter embarks on its journey to make its platform a safer, more productive place for everyone, it’s relying on third parties to step in to determine the best ways to capture, measure and evaluate health metrics. Perhaps, more importantly, Twitter needs help determining exactly what those metrics entail.