Autonomous vehicles are increasingly becoming the shiny object in Silicon Valley. But the opportunity doesn’t just extend to cars driving around the streets of a major metropolitan area, and Igino Cafiero and Aubrey Donnellan hope to take it somewhere a little less obvious: the middle of an orchard.

Cafiero and Donnellan are building an autonomously-driven tractor as part of a startup called Bear Flag Robotics. The pair argue that there’s increasingly a struggle to find enough labor to work on farms, and even then, the costs are continuing to rise over time — leading to a need to increase those efficiencies on the actual field in addition to a lot of new technology like satellite imagery and computer vision to analyze the health of plants. The first product for Bear Flag Robotics is a self-driving tractor, and the company is coming out of Y Combinator’s winter class this year.

“We got a tour of an orchard and just how pronounced the labor problem is,” Donnellan said. “They’re struggling to fill seats on tractors. We talked to other growers in California. We kept hearing the same thing over and over: labor is one of the most significant pain points. It’s really hard to find quality labor. The workforce is aging out. They’re leaving the country and going into other industries.” 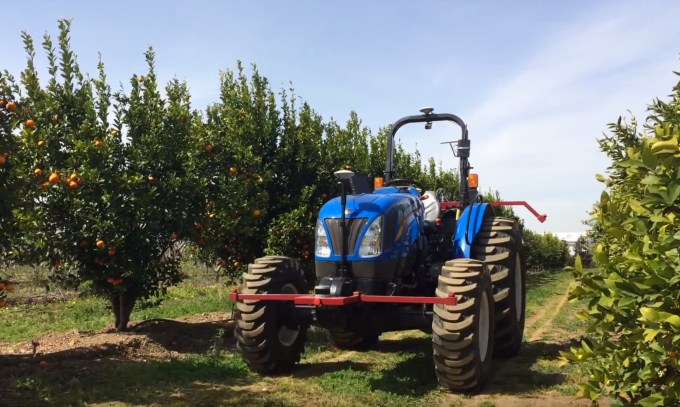 There are certainly a lot of technical challenges that go into it, and not just pertaining from having the right computer vision products in place in order to create an autonomous tractor. For example, the tractors have to be able to operate without a GPS signal, Donnellan said, simply because operating a tractor in an orchard may mean driving around with a ton of canopy cover — which could block the signal. It might be a little simpler to just drive down a path in an orchard, but there’s still quite a lot to consider, she said.

“We have this platform that we’ve plugged a ton of sensors into it,” Cafiero said. “That includes cameras. When you look forward, once we’ve automated the driving part, the sky’s the limit in terms of utilizing some of this technology once it’s out there. When we’re out there we can use these cameras, and be able to make recommendations and spot treatment in the field.”

When it comes to testing, Cafiero and Donnellan just go out to an orchard over in Sunnyvale a few times a week to see what some of the challenges growers face.

While finding labor has been a challenge, Cafiero acknowledges that there are still questions around undocumented labor when it comes to labor on those farms. He said, in the end, Bear Flag Robotics’ aim is to augment the workforce by taking away some of the more mundane tasks required on the fields. Cafiero also said that there’s a lot of reverse immigration happening from the U.S., leading to more of a labor shortage.

“The work itself is really tough work,” Donnellan said. “You’re in the field all day long, sometimes in inclement conditions. One of the tasks we’re automating is spraying, fungicides, herbicides, and these people out there, they’re wearing hazmat suits. It’s not good for their health to be doing these tasks in general. When you’re presented in higher paying jobs in other fields, there’s less of a case to go into that job, and there’s demand in a lot of other industries like construction [and other industries] where it’s easier work and better pay.”

Selling the actual tractor can also be a challenge, simply because potential customers will be buying their equipment down the road at sellers they know. If something breaks down, they need someone to come over, in person, as soon as possible to fix it or risk losing yield. And the major equipment providers may too see the need to start working on autonomous tools. Cafiero’s hope is that the startup will be able to work with local sellers and get into those channels, and that’s the only logical place to start. There might be some aim to scale up over time, but the company hopes to just get started with local dealerships for now.