Hoping to capitalize on the popularity of trivia applications like HQ Trivia, dating app maker Zoosk has just released an experimental app that combines trivia with the potential for meeting someone new. The app is a relaunch and complete makeover of Zoosk’s Lively, which first debuted in July 2016 as a dating app that used video to tell stories, instead of static profile images.

The new version of Lively is nothing like its former namesake.

As Zoosk explains, the previous version of Lively’s group video chat app was fun, but people didn’t know how to connect and relate to one another using the video format. It felt awkward to start conversations, with no reason to be there besides wanting to date.

The company went back to the drawing board, so to speak, to think about what sort of experiences could bring people together. Trivia, naturally, came to mind.

Lively aims to reproduce the feeling that comes with competing at a bar trivia night. When you join, you’re placed in a group video chat team of two to four people. Together, the team works to answer a series of 12 questions while discussing the answers over video in real-time. When they finish the questions, they’ll be able to see how their scores compared with other teams. 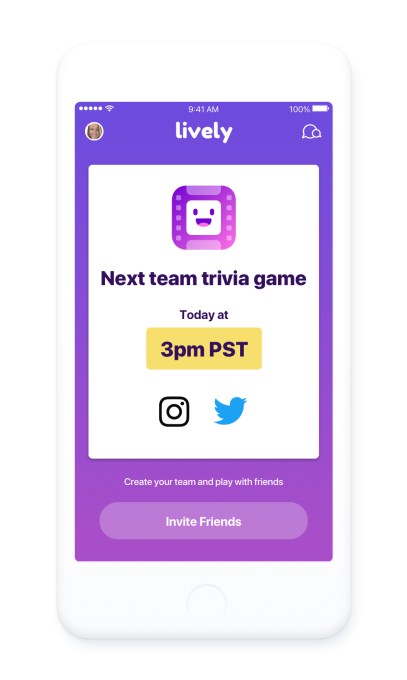 The “dating” component to the app isn’t quite what you would expect. In fact, it’s less of a way to find a date for a night out, than it is to just make new friends. After the game wraps, you’ll have the option to continue chatting with the other players, if you choose. You can also add people as a friend, if you hit it off.

And when trivia isn’t in session – the games run twice daily at 3 PM and 7 PM PST – you can group video chat with others on Lively.

Because you’re not added to a team with nearby players, your ability to make friends who are also possible real-life dating prospects is decidedly limited. That’s something that Lively could change to support in time, if it’s able to grow its user base. But for now, it needs to match users with any live players in order to fill out its teams. 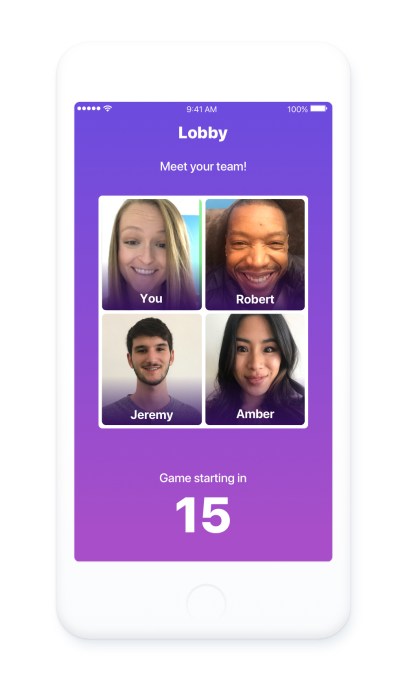 It’s understandable why it went this route, but it doesn’t lend itself well to meeting someone special – unless you’re open to meeting people anywhere (which some are), or are fine with just making new friends and seeing where that leads.

Unlike HQ Trivia, which features live streams with a host, Lively is just group video chat with a trivia component. That means it won’t be as challenging for Zoosk to operate, as it doesn’t have to worry with bandwidth issues and other costs of putting on a live game show. Also, because there are no prizes or payouts, you can join anytime during the 30-minute gaming session to be placed into a team and play along.

Lively is not the first app to support a group video chat interface where gameplay is an option. A number of video chat apps over the years have integrated games into their experience, including older apps like Tango or Google+ Hangouts, Line, and more recently, Facebook Messenger. But none have integrated games for the purpose of facilitating new relationships.

Zoosk today has 38 million members, but wanted to find a way to reach a younger demographic, which is why it originally launched Lively. The app was the first product to emerge from Zoosk’s in-house incubator, Zoosk Labs, where the company experiments with new ideas to expand its core business.

Whether or not Zoosk can turn trivia players into love connections remains to be seen, but it’s interesting how HQ Trivia’s success has led to this wider market full of knock-offs (e.g. Genius, Joyride, Cash Show, The Q, TopBuzz, Live Quiz, Live.me, Halftime Live!, Jam Music, etc.) and other tweaks that follow its idea of live trivia games.

Lively is available on iOS only for now.