It takes a village to grow a startup, so Village Global is offering access to a deep network of top tech execs to lure founders to its seed fund. Today, Village Global announced it’s raised $100 million for that fund that was first unveiled in September.

Village Global also announced its 90-day intensive Network Catalyst program that sees the fund get more involved in developing a startup’s product and connections. It takes 7 percent for an $120,000 investment plus admission to the program. Erik Torenberg, Product Hunt’s first employee and a founding partner of Village Global tells me that with the program “Founders get a ‘brain trust’ assembled to fit their needs and to introduce talent, customers and investors.”

“I really think of Village Global as a co-founder at Keyo” says actual Keyo co-founder Kiran Bellubbi whose real estate startup we wrote about last week. “We’ve ideated, strategized and built this business from the ground up together in under 3 months. Couldn’t have done it without this team. The pace of play is astonishing.” 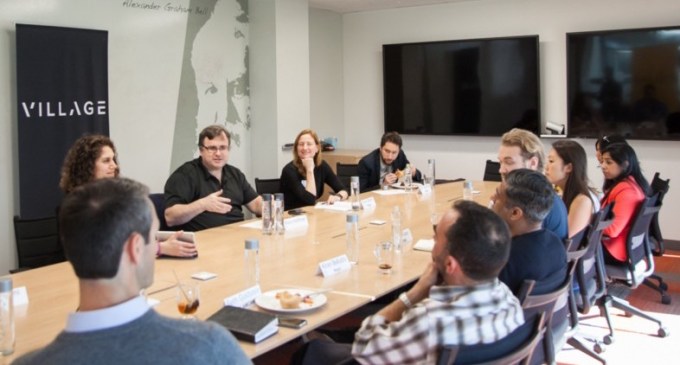 Newly announced LPs and mentors for Village Global include Fidelity’s Abby Johnson, Activision’s Bobby Kotick, 23andme’s Anne Wojcicki, and Cleveland Cavaliers owner Dan Gilbert. The question is how much these mentors will actually engage with the portfolio companies instead of just being figureheads. The program reminds me of Jay-Z’s Tidal, which signed artists like Daft Punk and Jack White as owners, but only a few like Kanye have actually done much for the company. Reid Hoffman did recently sit down with Village Global companies, though, as seen above. Village Global’s other partners like LinkedIn’s Ben Casnocha, 500 Startups’ Adam Corey, Chegg’s Anne Dwane, and SuccessFactors’ Ross Fubini will have to keep the big-wigs present.

Most venture funds today have a slew of general partners searching for and leading deals. A few have expansive service arms like Andreessen Horowitz’s recruiting program or GV’s design assistance. But Village Global’s approach is to have just a few partners but a ton of scouts that earn a portion of the returns if they bring in a great startup. These “network leaders” include Quora vice president Sarah Smith and YouTube’s VR lead Erin Teague. Rather than connect them to more tangible services, portfolio companies get access to Village Global’s deep mentor bench.

Other big funds have their own scout programs too that Village Global will have to compete with. The Wall Street Journal reported that Accel Partners, Founders Fund, Index Ventures, Lightspeed Venture Partners, Social Capital and Sequoia are among the top tier funds that use scouts to sniff out early stage deals. Others like First Round’s Dorm Room Fund and General Catalyst’s Rough Draft Ventures use student ambassadors on university campuses to identify high potential college startups.

It’s unclear whether letting younger, less experienced scouts write check is good for their funds or their own track records, and whether these scouts are shirking responsibilities from their own companies. But for founders, it means there are more people with their ears to the street who aren’t already famous finance big-shots. That could promote more meritocracy in an industry known for talking a lot about it despite tons of privilege given to founders of certain complexions or pedigrees.

With increased competition in the seed stage, funds can’t wait for founders to come to them any more.