Zuora, which helps businesses handle subscription billing and forecasting, filed for an initial public offering this afternoon following on the heels of Dropbox’s filing earlier this month.

Zuora’s IPO may signal that Dropbox going public, and seeing a price range that while under its previous valuation seems relatively reasonable, may open the door for coming enterprise initial public offerings. Cloud security company Zscaler also made its debut earlier this week, with the stock doubling once it began trading on the Nasdaq. Zuora will list on the New York Stock Exchange under the ticker “ZUO.” Zuora CEO Tien Tzuo told The Information in October last year that it expected to go public this year. 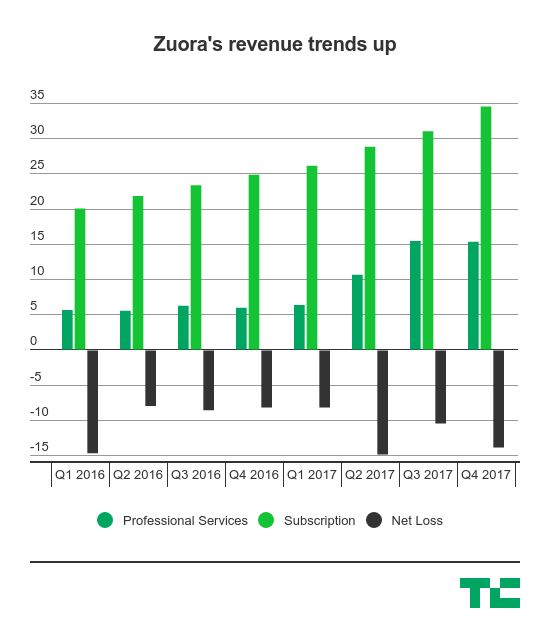 Zuora’s core business revolves around helping companies with subscription businesses — like, say, Dropbox — better track their metrics like recurring revenue and retention rates. Zuora is riding a wave of enterprise companies finding traction within smaller teams as a free product and then graduating them into a subscription product as more and more people get on board. Eventually those companies hope to have a formal relationship with the company at a CIO level, and Zuora would hopefully grow up along with them.

Snap effectively opened the so-called “IPO window” in March last year, but both high-profile consumer IPOs — Blue Apron and Snap — have had significant issues since going public. While both consumer companies, it did spark a wave of enterprise IPOs looking to get out the door like Okta, Cardlytics, SailPoint and Aquantia. There have been other consumer IPOs like Stitch Fix, but for many firms, enterprise IPOs serve as the kinds of consistent returns with predictable revenue growth as they eventually march toward an IPO.

The filing says it will raise up to $100 million, but you can usually ignore that as it’s a placeholder. Zuora last raised $115 million in 2015, and was PitchBook data pegged the valuation at around $740 million, according to the Silicon Valley Business Journal. Benchmark Capital and Shasta Ventures are two big investors in the company, with Benchmark still owning around 11.1% of the company and Shasta Ventures owning 6.5%. CEO Tien Tzuo owns 10.2% of the company.