Amazon confirmed it’s rolling out an optional “Brief Mode” that lets Alexa users configure their Echo devices to use chimes and sounds for confirmations, instead of having Alexa respond with her voice. For example, if you ask Alexa to turn on your lights today, she will respond “okay” as she does so. But with Brief Mode enabled, Alexa will instead emit a small chime as she performs the task.

The mode would be beneficial to someone who appreciates being able to control their smart home via voice, but doesn’t necessarily need to have Alexa verbally confirming that she took action with each command. This is especially helpful for those who have voice-enabled a range of smart home accessories, and have gotten a little tired of hearing Alexa answer back.

The addition of Brief Mode comes at a time when voice assistants are finding their way into ever more smart home devices, beyond the doorbells, camera, lightbulbs, thermostats, and others we’ve grown used to. At CES 2018 this January, for example, Alexa was found in a number of new devices, like smart faucets, light switches, car dashboard cameras, projectors, and several more home appliances like dishwashers, washers, dryers, and fridges.

The launch of Brief Mode was first spotted by users on Reddit (via AFTVNews), with many saying they had received the option just a few days ago. Others in the thread noted they had it as well, but then it went away – something that seems to indicate a test on Amazon’s part, or perhaps bugs with a phased rollout. In some cases, users also noticed a new toggle switch in the Alexa app, which allows you to turn Brief Mode on or off.

The explanation provided here doesn’t seem like Brief Mode would be limited to smart home commands, but anytime when Alexa could play a sound instead of a verbal confirmation. It also seems like it may cut down on Alexa’s overall chattiness in other ways, though we haven’t yet noticed any changes on other fronts. 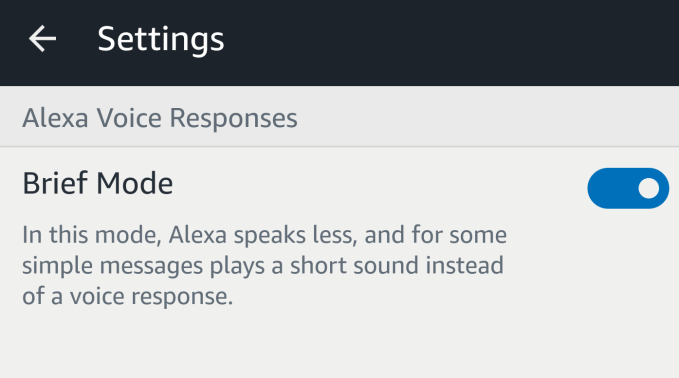 Now when Alexa is commanded to do things with smart home devices, she just chimes.

We asked Amazon yesterday to confirm if Brief Mode is rolling out to all users, and it confirmed today that is the case.

“We’re always looking for ways to make Alexa even more useful for customers, and the new Brief Mode setting is another example of that,” a spokesperson said.