Leveraging machine learning and artificial intelligence to glean information from large data sets is the greatest technology opportunity of a generation. After a decade of acquiring talent from startups and research universities, tech companies like Facebook, Google and Uber have amassed some of the best AI teams in the world.

However, we are not seeing the impact we deserve beyond the tech sector. Unfortunately, progress in other industries has become collateral damage to the tech sector’s race for AI talent, and this issue has received little attention.

Over the last five years, 90 percent of AI startups in Silicon Valley have been acquired by leading tech companies. These acquisitions have been largely unrelated to a successful product: Often, companies are in nascent stages and their products are either shelved by the acquiring company altogether, or the technology is embedded as a feature in another core offering. Outside of a few highly targeted cases, it’s a strategy aimed first at getting the talent in-house, then figuring out what to do with them. 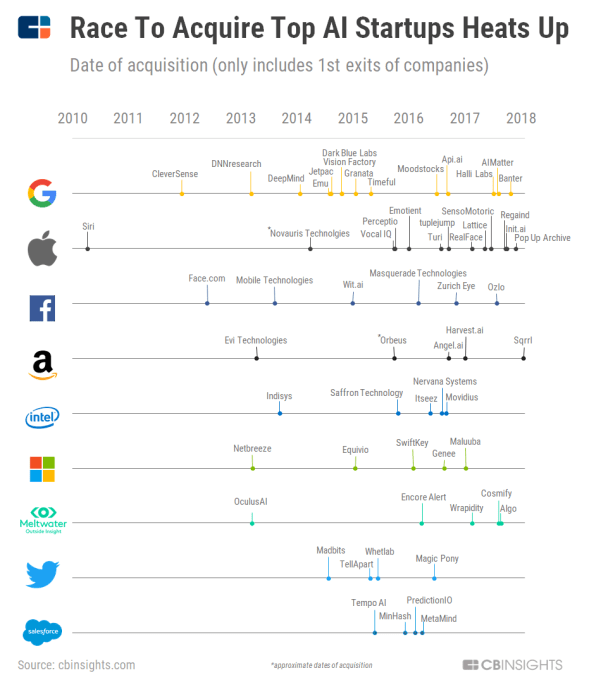 On a micro-level, this is a highly rational strategy across the tech innovation ecosystem. Leading technology companies have the capabilities, cash and scale to leverage this talent and technical expertise into profitable products down the road. For their part, venture capitalists feel safer investing at higher prices in early-stage AI companies because a lucrative technology or team acquisition provides downside protection if they are unable to build a big business. Lastly, management teams may be tempted by early acquisition offers that are priced much higher than non AI-centric companies with equivalent product maturity or market traction.

In the AI arms race, though, the name of the game is not just getting ahead, but depriving competitors of the AI talent that could make them competitive. While tech companies compete for the promise of future AI-based offerings, they are not just depriving their competition of talent, but the rest of the economy, as well.

On a macro-level, this hoarding strategy is undercutting 95 percent of the impact AI could have on the global economy and society at large. Aggregate revenue of the five leading U.S. tech companies (Apple, Alphabet, Microsoft, Amazon, Facebook) represent less than 5 percent of total U.S. GDP. Yet tech giants are buying up companies and directing them to focus on R&D, rather than building AI applications for specific, non-tech industry problems that can have an impact today.

Some argue that tech incumbents are best suited to bring industry-specific solutions to bear. Just look at cloud computing and how many industries have used it to increase their productivity — maybe the same will be done for AI and data services. I don’t believe this is likely to happen quickly, for two reasons: (1) tech companies have plenty of their own purposes in mind, and (2) the best AI solutions are designed around a specific problem and workflow.

You can see this already playing out in a few ways:

Today, your Facebook photos are automatically tagged. This is a core feature enhancement designed to increase customer engagement. Recommendations on everything from Google to Netflix to Amazon are increasingly likely to result in increased customer purchases as a result of leveraging machine learning to scan a broader array of profile information. Both of these represent core needs for major tech companies and are not likely to translate into relevant offerings for other industries. Personally, I think it’s a shame that so many great AI minds are working on comparatively incremental feature enhancements.

There is a huge opportunity for AI-based products and companies targeting applications in industries outside the tech sector.

Second, tech companies are building up AI workforces as part of their moonshots and experimental labs that are focused on reimagining incumbent industries on tech terms and building the core IP and research that could make this possible. History indicates that when tech companies set out to reinvent entire categories, many commonly fail at first (recall Webvan, or Marc Andreesen’s LoudCloud). Incumbents don’t react quickly enough (consider Safeway’s response to Webvan, and IBM or HP’s reaction to LoudCloud).

Finally a new disruptive effort eventually succeeds a decade or two later (to complete this example, consider Amazon regarding groceries, and AWS or Opsware regarding cloud computing). In this arena, consumers and tech companies ultimately win, while major incumbents that should have had the inside track are leapfrogged because of the talent and technology gap accumulated during the initial efforts.

Even when specific projects fail, tech incumbents’ research labs reap a side benefit in recruiting power: they get AI talent in through the door and allow them to continue their research, publicizing it and adding to the narrative that tech companies are the best place to conduct research (you get free lunch and dinner!).

The net result of this situation is that, today, AI talent and technology are largely denied from companies outside of tech. Incumbent industries, like insurance, won’t see improvements to their bottom line because a computer can win at Go. This is unfortunate, because although industry applications may seem less “disruptive,” they could have a far more significant impact on a shorter timescale.

So what can other industry leaders do? Incumbent industries must respond aggressively or risk being cut out of the next decade of innovation, which will be largely driven by AI and data analytics. This means (1) acknowledging what is at stake, (2) creating an environment to attract, retain and focus the type of talent required and (3) aggressively seeking said talent.

We’ve begun to see action in a few areas:

With the prospect of self-driving cars, the automotive industry faces an existential risk.  Jon Lauckner at GM has been at the center of some bold moves forward, including the $1 billion acquisition of Cruise and a $500 million investment in Lyft. Ford and Delphi have also been active with acquisitions like Argo AI and NuTomony. 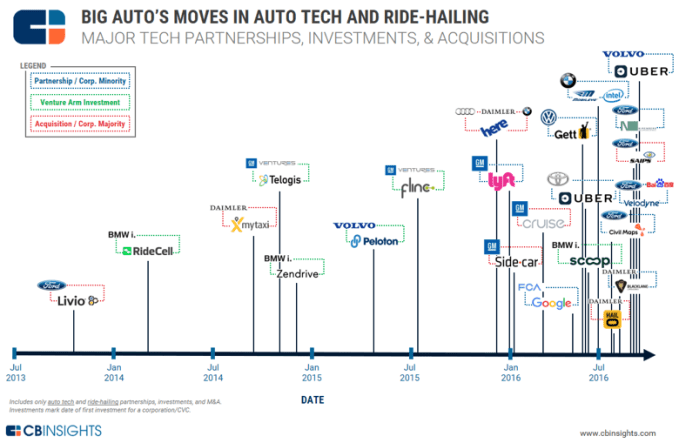 Agriculture also presents a good example of action in recognition of what’s at stake: Two major AI acquisitions have happened in the last five years. Monsanto acquired Climate Corporation to advance their effort into a data-driven future wherein they can provide customized insights and advice to farmers for planting crops. This past year, John Deere acquired Blue River Technology, which takes this a step further, leveraging computer vision to deliver customized insight and action on every individual plant in real time as a tractor moves through the field.

To be sure, acquiring talent is far from the only means to advance as an incumbent, but building the core talent, technology and business model for future success has proven challenging for entrenched incumbents. Netflix is one of the few examples of success, innovating their way from a DVD-based business to a streaming one. Still, it was a painful transition, taking tremendous vision, cannibalization of their own sales and a 75 percent drop in share price before their fortunes turned skyward.

Right now, there is a huge opportunity for AI-based products and companies targeting applications in industries outside the tech sector, and there is relatively little competition in the short and intermediate term — moonshots at major tech companies have a spotty record and largely target a distant future. In the meantime, incumbents have historically failed to capitalize on major technology transformations, and outside of the few examples mentioned, history appears poised to repeat itself unless companies take proactive measures.